One bomb, three suspects: Who was behind latest Diyarbakir attack?

A vehicle-borne bomb attack against a police compound in Diyarbakir left behind 11 fatalities and unanswered questions when three organizations were blamed for the carnage. 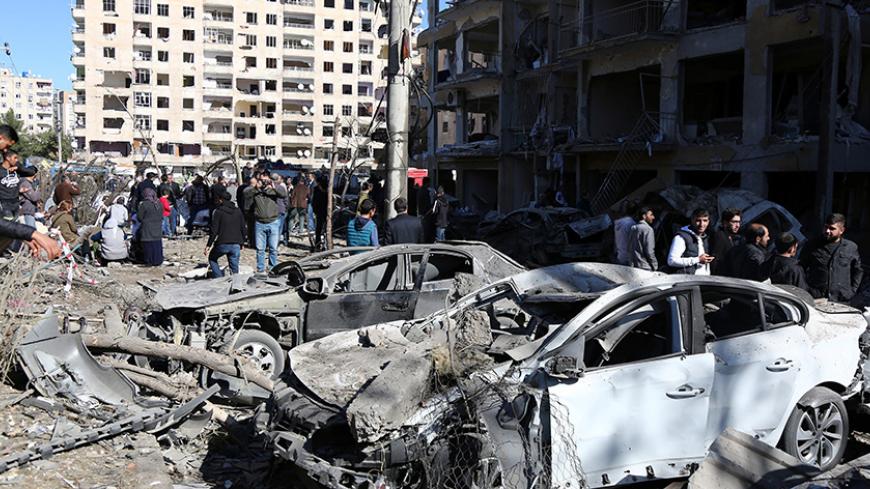 People look at buildings and cars, which were damaged during a Nov. 4 car bomb attack, in the Kurdish-dominated southeastern city of Diyarbakir, Turkey, Nov. 5, 2016. - REUTERS/Sertac Kayar

DIYARBAKIR, Turkey — Around 8 a.m. Nov. 4, life was just getting animated in Diyarbakir when a white minibus drove to the entrance of the police compound in the Baglar district. Its driver braked hard to avoid crashing into a taxi that cut in front of him. According to closed-circuit security camera recordings that Al-Monitor was allowed to watch, the irate taxi driver got out and angrily marched to the minibus. He opened the door of the minibus and almost immediately started shouting “Bomb, bomb” and ran away. Everyone in the area started running in panic. That was the end of the recording. A massive explosion and a mushroom cloud followed, along with the sound of gunshots.

“Three or four people with shaven faces in a car opened rifle fire and withdrew while firing,” an eyewitness who did not want to be identified told Al-Monitor.

The vicinity of the explosion looked like a war zone with almost all buildings damaged. Chaos prevailed, with people wailing and frantically searching for friends and relatives.

The Kurdistan Workers Party (PKK) was the usual suspect in the bombing, especially in Diyarbakir. But reports began coming out that Selahattin Demirtas, the chairman of the pro-Kurdish Peoples’ Democratic Party (HDP), and several other senior HDP officials and parliamentarians were in detention in the compound.

Arguments raged. A group of anti-government, pro-PKK protesters chased and attempted to lynch two men who were shouting, “Murderer Selahattin” and “Murderer PKK.” One young man involved in that lynching attempt, which was witnessed by Al-Monitor, tried to justify his behavior: “Why should the PKK be behind the blast when our own parliamentarians are inside? They are automatically accusing us.”

Who was the perpetrator? The first official statement came from the government of Diyarbakir province: “At 7:53 a.m. Nov. 4 in Baglar district near the riot police compound, while there were many civilians and students in the streets, a vehicle-borne explosive device was set off by members of a separatist terror organization,” the statement said. The “separatist terror organization” referred to was the PKK. But no one was satisfied with this statement because people know from experience that the PKK is instinctively accused in all violent incidents whether or not it is involved.

The official statement said the PKK had claimed responsibility for the attack, but no such claim was found in news reports or on social media. PKK supporters persistently questioned why the organization would attack a building where HDP parliamentarians were kept.

A day later, the Islamic State (IS) claimed responsibility for the attack on its website, first in Arabic and then in Turkish. The report disseminated by Reuters news agency comforted the PKK partisans, who felt vindicated.

“Our Co-Chair Mrs. Figen [Yuksekdag], myself and two parliamentarians were in there while our Co-Chair Selahattin Demirtas had been taken to the court. We entered the building and then the explosion happened. Our party officials, citizens and co-chairs have been in detention in that compound for 26 days. This massacre was a precisely planned operation,” Onder said.

Onder then gave the details of the attack to a news website. “We were just given a medical checkup. A massive explosion brought down everything around us from the walls, ceilings. My neck was bleeding. Police took us out to the corridor. We heard 10 minutes of sustained gunfire. We know the police were firing. There were casualties in the building. What panic and fury,” Onder told Gazete Duvar.

The IS claim for responsibility dispelled tensions in Diyarbakir for a while. People remembered a voice recording that was distributed three days before the Diyarbakir attack in which IS leader Abu Bakr al-Baghdadi was heard ordering attacks against Turkey.

But in the afternoon, the government issued another statement, which was sent to Al-Monitor. It still insisted that the PKK was the culprit.

The government’s persistence that the PKK was responsible did not persuade everyone, although it had provided the code name of the attacker and even provided a copy of his identity card. PKK supporters were sure that the perpetrator was IS until two days later, when Firat News Agency, which is close to the PKK, reported that the attack was claimed by the Kurdistan Freedom Falcons (TAK), who are linked to the PKK.

The name they used as the perpetrator matched the one used by the government. At first, people didn’t want to believe this bombshell of a report. There were allegations that Firat News Agency’s website was hacked. Al-Monitor was among those who investigated but couldn’t find any evidence of hacking. Shortly afterward, a statement by editors of the site declared that there was no hacking and their report was correct.

People were furious and disappointed. An organization struggling for the Kurds had blown up a neighborhood where Kurds lived and almost killed political representatives of the Kurds. It didn’t take long for HDP deputies to react to the TAK.

The perpetrator was thus identified and only one more question needed an answer: How, in a city where security measures are so strict, was a minibus laden with three tons of explosives able to reach the police compound?

For the inhabitants of the ravaged neighborhood, the identity of the perpetrators doesn’t mean anything except 11 fatalities, wrecked residences and dramas left behind.