Why Kurds in southeast Turkey are not taking to the streets

For the first time in 36 years, Diyarbakir has a government-appointed trustee to run its municipality — why was there not the expected popular reaction to the arrests of the city's elected co-mayors? 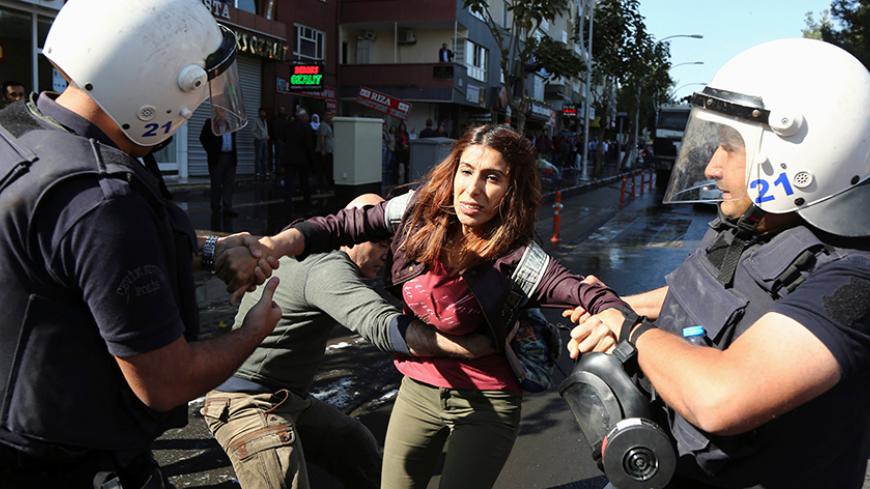 Riot police detain a demonstrator during a protest against the arrest of the city's popular co-mayors for alleged links to terrorism, in the Kurdish-dominated southeastern city of Diyarbakir, Turkey, Oct. 26, 2016. - REUTERS/Sertac Kayar

DIYARBAKIR, Turkey — Candidates who subscribed to the Kurdistan Workers Party's (PKK) politics were elected as mayors for the first time in the 1999 local elections.

In that landmark election, the Peoples' Democracy Party (HADEP) won 37 municipalities including metropolitan Diyarbakir. Feridun Celik was the first pro-PKK mayor of the city. One day in February 2000, less than a year after the elections, Celik was stopped by police. He was detained together with the mayors of Siirt and Bingol on charges of assisting the PKK. The detention of HADEP mayors triggered instant tension in the region. Thousands of people assembled in front of the municipality and protested for days on end despite occasional police intervention. The mayors were released a few days later to be tried without detention.

16 years later on Oct. 25, Diyarbakir Metropolitan Municipality was the target of another operation. Co-mayors Gultan Kisanak and Firat Anli were detained on charges of "membership in a terror organization." Police and gendarmerie squads raided and searched the municipality offices. As the search went on, few municipality workers and residents waited outside. There were some occasional minor protests in front of the building, as the co-mayors were kept in detention for five days, just like 16 years ago — but it's different this time.

While the streets were angry when HADEP mayors were arrested 16 years ago, protests this time were low key and participation was insignificant. According to pro-government media, Kurds are not supporting their politicians anymore. Selahattin Demirtas, co-chair of the major Kurdish Peoples' Democratic Party (HDP), noted the situation in a meeting attended by Al-Monitor. He said, “There is nothing they can do except repression. They are standing up thanks to the state of emergency. Protests are banned; so are demonstrations and politics. With whatever power we have in 81 provinces, be it five or 10 people, we will come out to the streets peacefully.”

The security measures Demirtas was referring to are now permanent features of the streets. Any location that could be used to demonstrate for the mayors' release was blocked off by the police. Hundreds of police were tasked with preventing illegal demonstrations. Another security measure that caught great attention was the disruption of internet connections at the same times as protests. The municipality was surrounded by police barriers and vehicles.

Only the municipality staff were allowed into the building. People predicted that all these measures were a prelude to the appointment of a government-elected trustee to run the municipality. They were right. For the first time since the military coup of Sept. 12, 1980, a trustee was appointed by the government. The new administrator took over the next day.

Kurdish politicians were angry, but the streets remained calm. Why?

Cihan Ipek, a member of the board of the Diyarbakir-based Dicle Social Research Center and a lawyer by profession, said the appointment of a trustee was not legal. Speaking to Al Monitor, Ipek said, “A mayor can commit crime. Within the perimeters of law, you can take him to court. If you have strong proof, you can punish him. If he is disqualified because of a crime he committed, a new mayor will be elected according to the law on local administrations. But we saw nothing legal was done to replace the mayors in total defiance of the law. This was a political decision.”

According to Ipek, the cause of the subdued public reaction is the prevailing atmosphere of fear in which city residents are living. He added, “We are under a regime of emergency. An authoritarian power does what it wants, ignoring law, basic rights and freedoms. I don’t think the people's passiveness means their approval of the action taken by the state. Democratic reactions need democratic means of expression.”

Associate law professor Vahap Coskun of Dicle University also thinks the appointment of a trustee is problematic. Speaking to Al Monitor, Coskun said, “The government, benefiting from state of emergency provisions, immediately resorted to issuing decrees with the power of law. That is extremely troublesome because it totally sidelines the parliament. The charges listed against Kisanak and Anli cannot persuade the public, who by large believe that what they see is not a legal but a political process.”

Coskun said fear cannot be the only explanation for the weak public reaction. He said it is also a protest of Kurdish politics. “The state of emergency has created an intimidating atmosphere. People are reluctant to go out to the streets and believe engaging in protests could cost them heavily. That is why they are restraining their reactions. Their silence is not only because of the state of emergency. People were truly disappointed by the lack of democratic reaction to the ditches dug by the PKK in towns. People were justifiably questioning why the support they gave to the HDP in elections was translated into violence in towns. The HDP's weakness in opposing ditches and barriers in towns led the people to distance themselves from the PKK and the HDP. They no [longer] listen to calls of the PKK and the HDP. So if there is so little public reaction this time, it is time for the HDP and the PKK to come to terms with the fruits of their political choices. If people don’t go out to the streets today, it is because of those ditches and barriers. People are truly worried with the events in their region and the Middle East. I believe people are much more careful when they go out nowadays.”

The suspension of thousands of public servants who used to participate in mass protests is another reason for low attendance in protests. Many are afraid of losing their jobs. Nevertheless, not many believe that the current meekness of reactions will continue for long. There are genuine fears that if the situation doesn’t change, reactions could erupt in a much more violent manner.

The detention of 12 HDP parliamentarians on Nov. 4 may well provide that spark.