A day after the co-mayors of Diyarbakir were detained, internet communications in 15 eastern and southeastern provinces were cut off, paralyzing the health, commerce and service sectors. 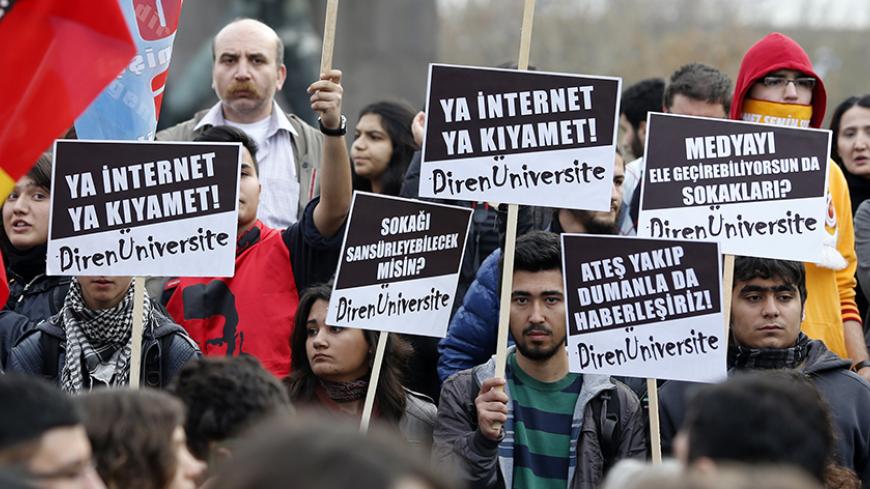 Protesters hold signs and wave flags as they demonstrate against new controls over the internet approved by the Turkish parliament in Ankara, Feb. 22, 2014. - REUTERS/Umit Bektas

DIYARBAKIR, Turkey — I was in a clothing shop on the main street of Yenisehir district when a customer came in. After he finished shopping, he went to the cashier and wanted to pay with his credit card. The cashier apologized, saying she could not perform the transaction because the internet was down. The customer walked out visibly upset; sales personnel were also disappointed. Similar disruptions were reported from many businesses that rely on internet communications.

Internet disruptions began a few hours after the detentions Oct. 26 of the co-mayors of Diyarbakir metropolitan municipality, Gultan Kisanak and Firat Anli. First we thought it was a local problem that usually doesn’t last long. Internet browser administrators said they had a technical problem. But as time passed, we learned the problem was not confined to Diyarbakir but covered many provinces of east and southeast Turkey. Nobody believed that a technical mishap would disrupt internet service in such a large area, and there must be something else behind it. Many believed that the internet was cut off to prevent the organization of protest actions against the detention of the co-mayors.

Selahattin Demirtas, chairman of the Peoples’ Democratic Party (HDP), also made this allegation. In a statement to journalists, including this Al-Monitor writer, Demirtas said the internet was cut to prevent protest actions.

“In hospitals, urgent cases cannot be issued medicines. Turk Telekom, GSM companies: You are committing a crime. You cannot turn off the internet because a governor or the minister asked you to. Communication is a right. People have already paid in advance for internet services. Now they should go and sue these companies. Don’t let them get away with it,” he said.

The health sector was one of those most affected by the disruptions. Pharmacies could not sell medicine or could only sell to those who could pay with cash. A desperate relative of a sick person told Al-Monitor that the pharmacist could not give him the medicine his relative needed.

A bus company in Diyarbakir solved the problem by subscribing to an internet satellite connection. Saban Dogmus, manager of the company, told Al-Monitor that it lost at least 50,000 Turkish liras ($16,000) over three days.

“We set up a new system via satellite. We were desperate. We still cannot handle credit cards. The new system doesn’t handle that,” Dogmus told Al-Monitor.

In disruptions that totaled 48 hours over four days, losses by businesses in the city are in the millions. Alican Ebedinoglu, the president of Union of Traders and Artisans, said city businesses are in a crisis. He said all traders are affected and the city’s economy is on the verge of collapse. “Let’s start with our union. We cannot issue any documents to our members. We cannot register any new members. Our connection to the tax offices is through the internet. Many of our traders have switched to wireless internet. They are now helpless. Our members had been suffering from the tensions and clashes in the area already, and now this. They are at end of their resilience — 80% to 90% of our business depends on internet. Businesspeople are about to rise up. A trader owes money and needs credit, but I cannot issue the documents he needs from us. This is a major crisis,” Ebedinoglu told Al-Monitor.

Ebedinoglu emphasized that he doesn’t believe the disruption is a technical malfunction. “I don’t believe it. Our internet networks had progressed over the years. Surely there must be a backup,” he said.

Among the most affected are journalists, who have been scampering to find someone with a private connection. The pro-Kurdish HDP has taken the matter to parliament and also lodged a complaint with the court.

We can’t help but remember the first days of the Syrian war when the internet used to disappear even before the most minor demonstration.

Of course, the problem has other ramifications, as it severely affects communications among Kurdish organizations.

“This is what happens when the state has the unchallenged monopoly over our communications. We were wondering why Hezbollah was spending so much money setting up its own fiber optic communications system in Lebanon that has a developed communications infrastructure. That suddenly make sense,” one senior Kurdish official who didn’t want to be identified told Al-Monitor.