Israel is considering adopting methods that Cyprus used in land disputes to regulate settlements in the West Bank, which has raised the ire of Palestinians. 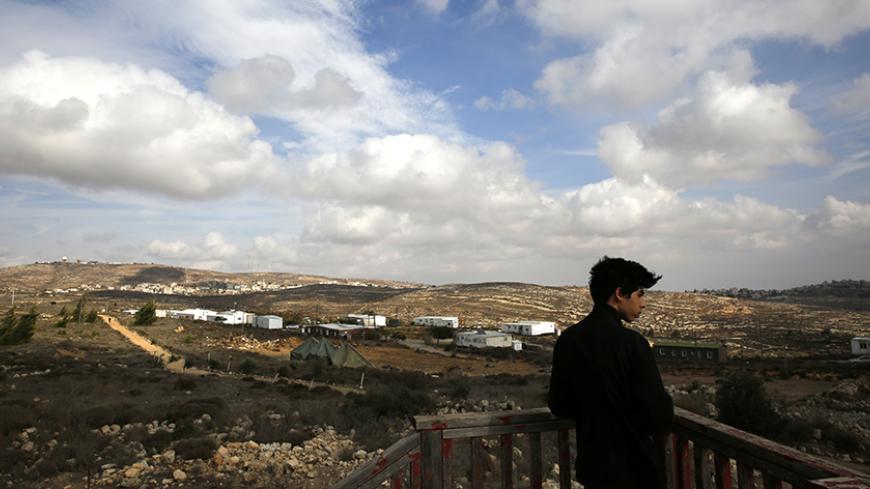 An Israeli youth stands on an observation point overlooking the Jewish settlers' outpost of Amona in the West Bank, Nov. 16, 2016. - REUTERS/Ronen Zvulun

There has been increasing talk in Israel since October about the illegal outpost of Amona, near the city of Ramallah in center of the West Bank, as Israeli right-wing parties threatened Nov. 29 to withdraw from the government should the outpost be ordered evacuated, based on the Nov. 14 Israeli Supreme Court decision. The Amona outpost is illegal as it is built on private Palestinian lands.

Israeli writer Ariel Kahana said in a Nov. 23 article on NRG that Israeli Prime Minister Benjamin Netanyahu had held meetings back in October with Justice Minister Ayelet Shaked and Attorney General Avichai Mandelblit to discuss the possibility to set up a land arbitration system in line with the so-called Cypriot model.

Cyprus, whose area amounts to 9,000 square kilometers (3,474 square miles), has been a disputed land between the Turks and Greeks since 1974. Back then, Greece launched an offensive on the island to annex it to its territories, which prompted the Turks to intervene militarily to protect the Turkish Cypriots. The island has been divided ever since into two parts, a northern half with a majority of Turks and a southern half with a Greek majority.

Kahana added in his article that Netanyahu has taken several steps to look into a realistic application of the Cypriot model on the Palestinian territories, as he has met with a number of international judges and formed a legal crew to find common denominators between the Cypriot model and the West Bank.

Abdullah Abdullah, a member of Fatah’s Revolutionary Council, told Al-Monitor, “The Israeli-Palestinian conflict might witness a political stagnation in the coming period as the world has been preoccupied with wars in Iraq and Syria. We as Palestinians stand hopelessly in the face of Israel if it wishes to go through with the Cypriot model. We can merely take some limited political and legal steps before the governments and countries that are friends of the Palestinians. The administration of the US President-elect Donald Trump does not seem to object to the application of this model in the West Bank, and it is supportive of Israeli policies.”

This is not the first time Israel has suggested the application of the Cypriot model as a solution. Israeli Defense Minister Avigdor Liberman called for the implementation of the model when he served as foreign minister in 2009.

Khalil Tufakji, a Palestinian expert on Israeli settlements and director of the Cadasters Department at the Orient House Foundation in Jerusalem, told Al-Monitor, “Israel is striving to apply the Cypriot model in order to establish its claims that the West Bank is not an occupied land and that the absentee owners of lands there can be compensated for their lands. This … is in direct conflict with all international laws, unlike the case in Cyprus.”

Israel might resort to the implementation of the Cypriot model in the West Bank based on three premises: the use of the absentees’ properties law, claiming the settlers of all Israeli settlements to be local residents and compensation for absentee owners.

Israeli military radio, which is affiliated with the Israeli army, reported Nov. 20 that Israel is willing, by emulating the Cypriot model, to pay compensation to Palestinian owners for their lands in Area C of the West Bank, which Israel is seeking to annex, as an alternative to the two-state solution. Area C consists of 60% of the West Bank’s total area of 5,860 square kilometers (2,262 square miles).

In the same context, Israel might also, in anticipation of any international response, form an arbitration jury in the West Bank to settle issues of ownership of lands that are intended to be annexed to Israeli territories and to determine the size of compensation to Palestinian owners, according to Israeli military radio.

Former Palestinian Planning Minister Ghassan Khatib told Al-Monitor, “By seeking to implement the Cypriot model, Israel wants to impose a fait accompli on Palestinians and is also resorting to such international models that are in line with its goals. However, evoking this model to define the future of the West Bank is not an easy task for Israel, as there are international resolutions confirming that the West Bank is an occupied territory by Israel and not a disputed land, as is the case of Cyprus. However, Israel is likely to take advantage of the fact that the international community is not very focused on the Palestinian cause to try to impose the Cypriot model without any fuss.”

For his part, spokesman for the Palestinian presidency Nabil Abu Rudeina warned Dec. 3 against the application of the Cypriot model on the West Bank, dubbing it as the most dangerous of projects of racism and Judaization against Palestinians. He also threatened that the Palestinian leadership will resort to international tribunals to stop this project from being implemented on the ground.

Hassan Asfour, former Palestinian minister for nongovernmental agency affairs, said Nov. 24 that the Cypriot model has been widely discussed among Israelis and some Palestinians. He also said that some Israeli ministers are putting forward this model as an alternative to the two-state solution before some international bodies, noting that this proposal has reached Trump’s office. He did not give further details to this effect.

The source added, “The Israeli government has not disclosed ways of implementation of this model so far and is waiting for the right conditions in the West Bank to announce the implementation mechanism.”

The coming days could see further talks about the Cypriot model, as Israeli legal committees are studying the common denominators between Cyprus and the West Bank to put forth legislation at the Knesset to legalize the Amona outpost and apply the model. Although this measure remains a long shot because Israel would need to resort to international bodies such as the United Nations to take such a step, it believes that this is the best opportunity to go through with its political plans as Palestinians are preoccupied with their internal conflicts and divisions, without any unified leadership to hinder its projects in the international arena.