Even as Ankara and Athens reengage in exploratory talks over long-running maritime disputes, Turkey is pressing ahead in its campaign for a two-state solution on the island. 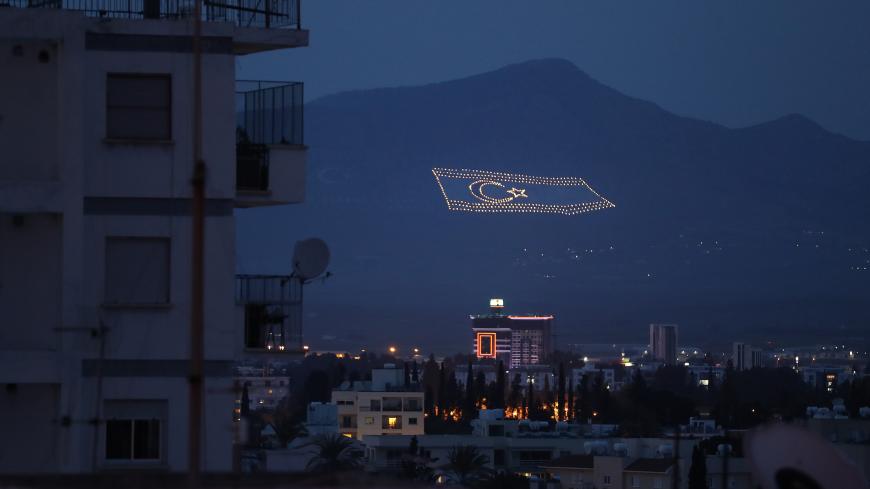 A massive flag of the self-proclaimed Turkish Republic of North Cyprus lies illuminated on a mountainside on the Turkish northern part of the island as viewed from a residential area in the southern Greek part of Nicosia on March 7, 2017, in Nicosia, Cyprus. - Sean Gallup/Getty Images

Ankara is working with its allies in the breakaway Turkish Republic of Northern Cyprus to make a case for a two-state solution in the leadup to a UN-sponsored summit scheduled for early March on the divided Eastern Mediterranean island.

“We will enter into a deal as the Turkish Republic of Northern Cyprus and not as the Turkish Cypriot community,” Foreign Minister Tahsin Ertugruloglu told Al-Monitor in a telephone interview. “The road to a settlement passes through the recognition that there are two separate states on the island of Cyprus.”

The two-state solution has been heavily promoted since the election of Turkish President Recep Tayyip Erdogan's ally Ersin Tatar as president of Northern Cyprus last year. The island is at the center of ongoing maritime disputes in the eastern Mediterranean Sea over exclusive economic zones and potential gas reserves.

Greece and Turkey are two guarantor powers of the island along with the United Kingdom under a constitution that granted Cyprus independence in 1960 from colonial rule by Britain. Athens has been on the front lines of Turkey’s deteriorating relations with the West and the two NATO allies have engaged in heated sparring over maritime disputes.

Dimitris Katsoudas, a former Greek secretary general for European affairs who held a number of government positions under the ruling New Democracy Party, told Al-Monitor that Turkey is likely posturing with its demands for a completely separate state on Cyprus.

“Turkey will defend the idea of a two-state solution in Cyprus not in order to achieve fully separate states but to achieve a northern Turkish state with a lot of ownership of its own that would be almost independent,” he said.

Past settlement talks centered on two constituent states joined in a federation. This framework was the closest the island of 1.2 million people came to reunification in the form of the UN-backed Annan plan before the ascension of Cyprus into the EU. Turkish Cypriots voted overwhelmingly for the plan but 76% of Greek Cypriots rejected it.

Seventeen years later, the Annan plan is still hotly debated with both sides invoking it to challenge the other’s lack of good faith and designs to exploit their respective communities.

“The Annan plan was really a chance to end the issue and that was rejected by the Greek Cypriots. Now there is no trust towards the UN-led initiative,” said Murat Aslan, a former Turkish military intelligence professional who has held various roles in the Defense Ministry and General Staff.

Marios Evriviades, a professor of international relations and history at Neapolis University in Pafos, Cyprus, says a major reason the plan was rejected was that it didn’t properly address the removal of Turkish troops from the island. “The Turks want the military presence not for protection but so they can continue plundering the wealth of Cyprus. They won’t allow normality to function.”

Yet after years of failed talks and decades of living in de facto separation, the idea has more supporters than Erdogan and Tatar. Some even believe that Greek Cypriot President Nicos Anastasiadis himself favors two separate states.

Katsoudas tells Al-Monitor that as time progresses the Cyprus issue becomes more intractable. “Realities on the island have drastically changed. At the beginning, Turkish Cypriots were the majority and they had a Cypriot identity. Now the vast majority of the inhabitants of the Turkish controlled northern Cyprus are from the hinterland of Anatolia.”

The fading memory of a united Cyprus and the urge to go separate ways after years of frustration with the UN process give the two-state solution more traction. It is also what many people are familiar with from daily life.

Cyprus has been divided since 1974, when a failed coup attempted to unite the territory with Greece and Turkish troops invaded in the name of protecting the Turkish minority. Since then, the internationally recognized Republic of Cyprus and the Turkish republic, recognized only by Ankara, have been divided by the green line running across the island.

“The two-state solution was realized after 1974. There are two different administrations. The parameter to assess its sufficiency is if there has been any conflict on the island since then, which there has not been,” Aslan stated.

Evriviades agrees a two-state solution would in some ways mean institutionalizing the status quo, warning Greek Cypriots must lobby Western capitals against it.

Those in the north bristle at this suggestion and believe that two state is the only way forward after years of international isolation. “If you want a settlement you must accept the realities of the island. There is no legitimate Republic of Cyprus,” Ertugruloglu told Al-Monitor.

Against this backdrop, analysts say it’s difficult to imagine progress being made during next month’s talks. But Erdogan may feel he has time on his side. The longer the issue goes unresolved the more all Cypriots grow used to the divided island.

Another reason Erdogan is leaning on the Cyprus issue is the chance it offers him to consolidate gains in the eastern Mediterranean even as he reaches out to the West. Recent talk from Ankara of willingness to cooperate over the S-400 missiles and signals that it is looking for a reset with the EU will face pushback among nationalist voices in Turkey. Advancing the cause of Northern Cyprus would garner support in those quarters and provide cover for cooperation in other areas.

Western powers appear less willing to confront Turkey in Cyprus. Erdogan didn’t invent the Cyprus issue and Turkish troops have been stationed on the island since 1974. As opposed to an imperial foray in the deserts of Libya, Ankara’s concern for Cyprus is tied to the roughly 300,000 Turkish people living in the north.

“We have never shied away from expressing that the Cyprus question is a national matter for the Turkish nation. The future for Turkish Cypriots is a road we will embark upon with our motherland Turkey,” Ertugruloglu told Al-Monitor.

If leaders in Brussels and Washington are looking for an area to compromise with Ankara it may be in Cyprus. Many still regret that the Annan plan was voted down and consider it a lost opportunity to resolve the issue.

Whether there is a two-state solution or not, Turkey may have the wind at its back in Cyprus.