The Zionist Camp’s “Netanyahu’s Hidden Taxes” campaign will be remembered as one of the most detached and disengaged political efforts in years. 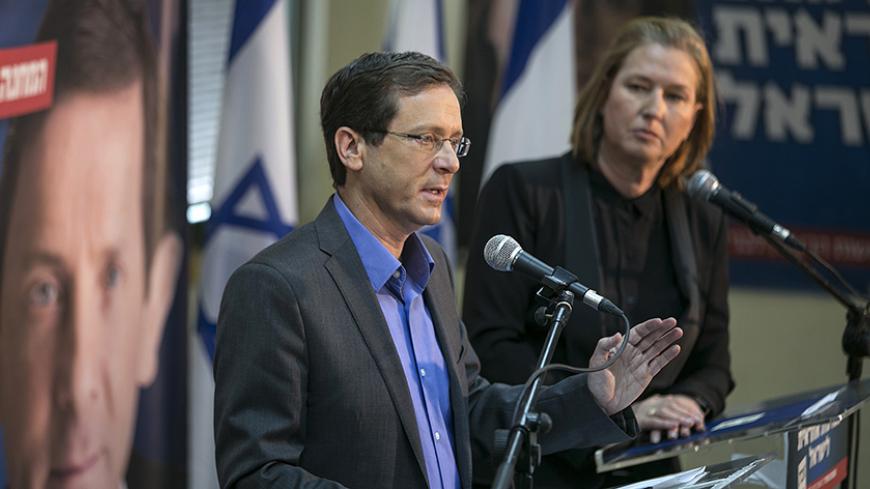 Tzipi Livni (R) and Isaac Herzog, the heads of the centrist Zionist Camp, hold a news conference in Tel Aviv to introduce their party's platform for the March 17 election, March 8, 2015. - REUTERS/Baz Ratner

Several prominent Zionist Camp Knesset members who have been recognized for their social activism were caught by surprise Dec. 6 when they learned from media reports that their party leaders had held a press conference to announce a new campaign against the two-year budget that the Knesset is expected to approve by the end of this month. The launch of the “Netanyahu’s Hidden Tax Fraud” campaign featured Knesset member and professor Manuel Trachtenberg. Sitting beside him on a podium were Zionist Camp co-leaders Isaac Herzog and Tzipi Livni and the head of the party’s Knesset faction, Merav Michaeli.

“We are well in the midst of debating the state budget in the Knesset,” said Trachtenberg. “This time we want to raise the curtain on Netanyahu’s economic fraud, the fraud revolving around his hidden taxes. These are all the extra payments that they take out of our pockets every month.” Trachtenberg had been a hot item when he headed the committee formed in the wake of the 2011 social justice protests. Since then, as a run-of-the-mill Knesset member, he has all but disappeared.

Among the people who had no part in the campaign's launch and knew nothing about it were two former party chairs, Amir Peretz and Shelly Yachimovich, who as early as a decade ago had put social issues at the top of the party’s agenda. Also missing were Stav Shaffir, Itzik Shmuli and Yossi Yona, Knesset members who had achieved prominence as icons of the social protests. They, too, knew nothing about the new campaign.

When some of these party members were asked to post relevant materials on their Facebook pages, they didn’t know whether to laugh or cry. What bothered them wasn’t just the anachronistic content, which was reminiscent of Yair Lapid’s “Where’s the Money” campaign of 2013, or that no one actually bothered to tell them about the campaign in the first place. Rather, the bulk of their frustration centered on the illogical way in which the senior opposition party was acting, particularly given that it is rapidly crashing in the polls and public opinion. Instead of uniting the party’s ranks, its leaders seemed more interested in promoting themselves through a public relations campaign.

The party had actually experienced a revival of sorts around the time of the annual memorial ceremony for late Prime Minister Yitzhak Rabin, held in November. The Zionist Camp assumed responsibility for his memorial when it was discovered that there was no one else to fund it. That tens of thousands of people showed up at Tel Aviv's Rabin Square gave the impression that there is still a significant public that believes in a diplomatic process with the Palestinians and peace.

A few weeks earlier, the members of the Zionist Camp's Knesset faction had spent a weekend at the Ein Gedi oasis resort, where an organizational consultant had tried to help them improve their game as a group. “I first heard about the press conference on the radio, while I was on my way to the Knesset, and I was in shock,” one Knesset member closely associated with social causes told Al-Monitor on condition of anonymity. “After everything we did in Ein Gedi, the party leader himself is doing anything but uniting our ranks. All his talk about the periphery isn’t worth much when four Ashkenazi Jews from Tel Aviv are standing at the party’s forefront. It sends the message that we’re a party of satiated people.”

The press conference itself failed to create a significant buzz in the media. There was nothing new in the message that Netanyahu may have been lowering taxes with one hand, while imposing heavy “hidden” taxes on working families with the other. The story was also pushed aside by headlines about the Amona outpost, Netanyahu’s war against the country’s journalists and the submarine scandal.

The truth is that the hidden taxes campaign will most likely be remembered as one of the most detached and disengaged political efforts seen in Israel in the past few years. While the state budget for 2017-18 will soon be up for a vote, there is no real tension or drama surrounding it. It is expected to pass with a clear majority, and there are no new elections on the horizon. Furthermore, it is unclear why the Zionist Camp decided to invest money in a socio-economic campaign when it has been proven that a party that has historically stood on diplomatic issues does not attract votes when it switches to such an agenda. For instance, the 2013 campaign highlighted a social democratic agenda while ignoring the diplomatic agenda. Then-party leader Yachimovich later admitted that she had made a mistake and that the party had lost seats because of it.

It makes sense that the Zionist Camp would want to put out an opposition agenda now, if not sooner. This is especially true for a week in which the party was forced to contend with another harsh poll, reported Dec. 2 on Channel 2, indicating that the two main contenders for prime minister in the next election will be Netanyahu and Lapid. According to the poll, while Likud and Yesh Atid would each win 25 seats, the Zionist Camp, which came out of the last election with 24 seats, would plunge to an all-time low of 10 mandates. Most of the seats that it stands to lose would be taken by Lapid.

“It’s hard to avoid making personal calculations,” one frustrated member of the Zionist Camp confided. “If this ends up being the situation in the next election, at least 14 current Knesset members will find themselves out of a job. We should pray that we get at least 15 seats. That would be an achievement. No one thinks we can come to power anymore. It’s frustrating and depressing. Two years after the election, Herzog suddenly remembers that he is actually part of the opposition, especially after Lapid stole all our seats.”

Another Knesset member also requesting anonymity ironically jibed about how deep a pit the party is in. “Our problem is so severe that Yair Lapid, who has no agenda, could fly off to Cyprus tomorrow, have a drink on the beach and do nothing else, and people would still come running to him because of our lack of leadership. After all, when it comes to the caliber of people on his party’s list, Lapid has no distinct advantage over us.”

The mood inside the Zionist Camp is dismal and depressed. Relations between Herzog and Peretz are far from harmonious, to put it mildly. As the party’s seats slip away, the leadership crisis surrounding Herzog is only getting worse, while primaries for party leader are not scheduled until July.

In response to the disgruntlement being expressed, the leadership of the Zionist Camp told Al-Monitor, “A Knesset faction is not a creative forum. It has to allow its leaders to charge forward, just like we did on the [Rabin] memorial. We made a decision and moved full steam ahead. You can’t expect everyone to be involved in everything.”

The leadership also claimed that the entire faction had been updated about the Netanyahu taxes campaign and informed about the press conference. They were even invited to attend by Michaeli. The leadership said, “In other words, their claims are unfounded. It’s important to realize that a political organization that wants to survive must first stop whining and start doing. The campaign is getting enormous exposure, and we’re glad about that.”