Why Iran’s 'green gold' is set to rebound

Despite being hit by climate change and sanctions, Iran’s millennia-old pistachio production appears set to increase production and export. 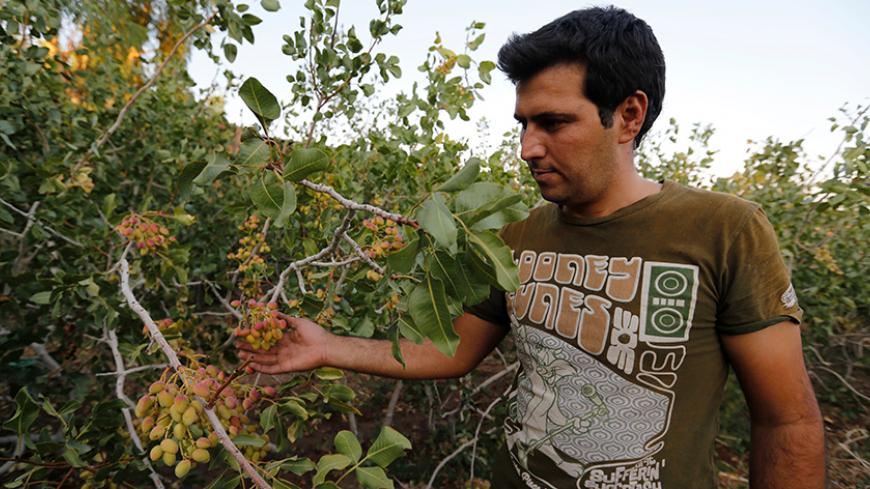 TEHRAN, Iran — While Iran may be known for its massive oil and natural gas reserves to many people around the world, it is also known to some for its top-quality pistachios. Production of the nut in Iran dates to the fifth century B.C. For the last Iranian calendar year (ending March 20, 2016), Iran produced 261,000 tons of pistachios, 50% of which was exported. According to official figures, Iran earned as much as $1.2 billion from the export of 130,000 tons of pistachios last year, making it the biggest source of income in the agricultural sector.

Iran was for a time the unrivaled, leading producer of pistachios, with southeastern Kerman province being the hub of production for so-called green gold. That, however, changed in recent years. In 2012, the United States for the first time became the largest producer and exporter of pistachios, as production declined in Iran, mainly due to water shortages triggered by climate change and uncontrolled use of underground reserves.

Climate change has caused a nationwide drought in Iran, leading to 85% of the country being classified as arid or semi-arid. The decline in annual average rainfall and resulting shortage of surface water has forced farmers to dig more wells to pump water from underground reserves. Nearly half of the 750,000 water pumps on Iranian farms are illegal, which illustrates why the unconstrained use of underground water in agriculture is the main source of water waste in the country.

The situation is grim in Kerman province, which accounts for 70% of the country’s pistachio production. Mohsen Jalalpour, the former chairman of the Iran Chamber of Commerce, is one of the many experts who has repeatedly warned about the danger to pistachio production. “Kerman’s pistachio industry will last no more than 10 years,” he told the business weekly Tejarat-e Farda in November.

According to Jalalpour, who is also a former chairman of Iran’s Pistachio Association, the drought is taking its toll on Kerman’s pistachio farms, with 12,000 to 15,000 hectares of farms dying from a lack of water every year.

Ali Ahmadian, a pistachio grower from Kerman, confirmed Jalalpour's general concerns, telling the Iranian Students' News Agency on Oct. 8, “Unfortunately, pistachio farms are drying out because of water shortages.” In addition, he identified another, related problem, stating, “The quality of the water has also suffered, because the level of underground water has been going deeper, now at 300 to 400 meters [984 to 1,312 feet].”

Ahmadian also complained about the lack of government support and the high cost of pistachio production, “Unlike other agricultural products, such as wheat, that are bought by the government, pistachios are purchased by middlemen.”

Seyed Mahmood Abtahi, the chairman of the board of Iran’s Pistachio Association, told Al-Monitor that water consumption from underground sources is much higher than the input from rainfall. “There is currently a plan under discussion about developing a water market under which — if approved and implemented — a greater amount of the existing water will be dedicated to those areas that have a higher yield rate of production,” he told Al-Monitor.

The Iranian pistachio industry has also been affected by yearslong nuclear-related sanctions. The industry was not directly targeted, but sales of pistachios to foreign markets, including Europe, were hindered because of the banking and shipping restrictions imposed as part of the punitive measures.

Despite the domestic hurdles and foreign challenges, Iran is still among the top global producers and exporters of pistachios. After relinquishing the top ranking to the United States in 2012, it regained it in 2015 as a result of better access to international markets due to the removal of sanctions and a drop in US production.

Iran and the United States together account for 70-80% of global pistachio production and have been competing for the top spot as both the biggest producer and exporter over the past several years. Also recently, Australia, Turkey and Spain have increased production, thereby allowing them to join the export market, yet another factor that could exacerbate the problems of the Iranian pistachio industry in the near term.

Several plans have been formulated to reduce the impact of the water shortage, some of which have already been implemented with success. These include measures aimed at managing the use of water to help maintain underground reserves.

In addition, the government wants to encourage water conservation by allocating funds to farmers to help them buy modern irrigation equipment to replace traditional systems. Many experts advocate developing farms in regions with better soil and water resources, along with using modern cultivation methods and new types of pistachios with higher resistance to failure and disease.

Other than the above mentioned measures, experts also say Iran could increase its exports by further improving the quality of its pistachios, such as through better cultivation. Removing customs duty restrictions, establishing banking enterprises to connect producers and exporters and providing support to exporters for long-term contracts are among other measures that could boost the Iranian pistachio industry.

Despite the hurdles and threats the industry faces, the latest statistics indicate that Iran exported more than 40,000 tons of pistachios worth in excess of $381 million in the first half of the current Iranian year (beginning March 21, 2016). The figures show a 22% increase in terms of weight and a 20% jump in terms of value over the previous year. As a result, Iran is expected to export more than 136,000 tons of pistachios by the end of the current Iranian year (ending March 20, 2017).

With the Iranian government successfully moving toward reducing its reliance on oil revenues in recent years, it is expected to dedicate a good deal of attention and resources to the pistachio industry to maintain its lion's share of the global market. Data released by the US Department of Agriculture is a clear indication in this regard, suggesting that Iran will remain the world’s biggest pistachio producer for the 2016/17 crop year.