Rather than seeing the victory in Aleppo as an opportunity to wind down operations, the Syrian government’s Iranian ally appears to be preparing to push ahead with new offensives. 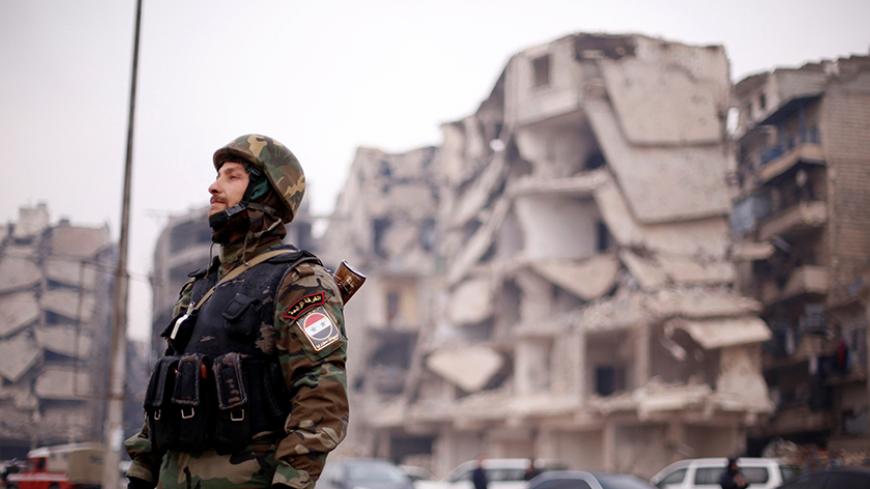 On Dec. 22, the same day the Syrian government announced that Aleppo was under its control, Iranian Deputy Foreign Minister Hossein Jaberi Ansari was in Damascus to meet President Bashar al-Assad. Ansari was in fact in the Syrian capital to congratulate his country’s prime regional ally for retaking Syria’s largest city and one of the main strongholds of the armed opposition. But Aleppo isn’t only a military target for Assad and the coalition fighting on his side, and retaking it isn’t an ordinary victory in the long route of the crisis. Hezbollah Secretary-General Hassan Nasrallah, just a few hours after meeting Ansari in Beirut Dec. 23, said the triumph is a milestone to be invested in, representative of “a tough war that foiled all attempts to topple the Syrian government.”

Over four years of fighting in Aleppo depleted the Iranian-led axis more than clashes in any other area in Syria. Without any accurate count, it is enough to say that hundreds of pro-Iranian fighters were killed in the battles; among those who died were high-ranking officers in both Iran’s Islamic Revolutionary Guard Corps and Hezbollah. Iranian Gen. Hussein Hamadani and Hezbollah Cmdr. Ali Fayyad — aka Alaa of Bosnia — were both killed near the Athrya-Khanaser road. Hamadani was killed Oct. 9, 2015, and Fayyad on Feb. 26 of this year while executing the plan for the retaking of Aleppo.

An officer who asked to only be identified as a senior military commander from the forces allied with the Syrian government told Al-Monitor, “Since the beginning of the Syrian crisis, the armed groups dreamed of taking control of Aleppo due to its strategic importance.” According to the commander, when the battle started, “There was a solid strategy: first, opening the road to Aleppo [Athrya-Khanaser and al-Sfira], then retaking the southern countryside and part of the northern countryside, and finally fighting the battle for the city. This strategy was set from the beginning, and without it there would have been no victory.”

The Iranian-led axis’ strategy involved nibbling forward from outside the city toward areas of opposition groups’ dominance; this meant separating opposition areas with several corridors. The corridors, when finally connected with each other, constituted a complete siege. The armed opposition groups attempted during the last few weeks to reconnect eastern neighborhoods of Aleppo to areas they controlled in the outskirts of the city, but found this wasn’t possible. These attempts were confronted by tightening the siege, which entailed tough battles. The two sides saw the international and regional political moment as critical and decisive: The perceived vacuum was damaging to the opposition and an opportunity for those siding with the Syrian government.

To the coalition fighting on the side of Assad, there were no concerns about game-changing decisions with respect to the international community. The United States is busy with the presidential transition and about all it could do was issue statements of condemnation. Turkey is on bad terms with the West and has started investing in new relationships with Russia and Iran; this brought about the possibility of involving Ankara in the final solution to the Aleppo dilemma and later in efforts to reach a nationwide cease-fire that could help stabilize the situation. On the opposition side, the same givens clearly mean that a defeat in Aleppo will have dire implications on the status and morale of Syrians opposed to the regime. Regional countries backing the opposition kept their distance while waiting to see what the new administration in Washington was going to do in terms of the Syrian crisis. This doesn’t mean a total withdrawal from the scene, but rather that there is a moment to reassess and later decide whether to be part of an overall strategy or to start a separate strategy.

“The recapture of Aleppo will have a long-term strategic impact on the war in Syria,” the military source told Al-Monitor. He said, “Taking back Aleppo means to allies of Syria what it means to the Syrian government itself. First, it thwarts all political plans by powers backing the [anti-government] militants to take the city as a capital for the opposition. Second, there will be no autonomous region in northern Syria similar to the Benghazi model in Libya. Third, Syria is going to stay unified and plans to divide it are going to fail. Fourth, it will add a major city to the main cities in Syria away from militant control.”

The fall of Aleppo doesn’t mean the end of the war in Syria for Assad and his allies — but that’s not a matter of debate, as there are still other battles to be fought. “The regime controls Damascus and Aleppo, the two largest cities in Syria, with the largest populations, along with Homs, Hama, Latakia, Tartus and Suwayda. This regime is strong and active and can’t be ignored or no one can claim it's fallen or finished,” Nasrallah said Dec. 23. “This doesn’t mean the project to destroy Syria is over and the war on Syria is over. It’s still on, but we are heading to a new chapter — our front is advancing but the responsibility is bigger; our duty now is to secure the city of Aleppo and the areas around it, because the armed groups are going to [launch another] attempt on the city and its surroundings.”

The military source said that the new chapter Nasrallah was referring to will involve “the war on takfiri terrorism to the last breath, continuing the support to the Syrian government and backing its decisions, supporting the Syrian people until they fulfill their ambitions, confronting all attempts to divide Syria, helping Syria get out of this crisis stronger and preserving it as a state of resistance, and finally, helping using all means to rebuild the country.”

Despite the above statements, it is not clear what the next military step the forces allied with Assad will take. Some analysts suggested the opposition-held city of Idlib could be next, but this doesn’t appear to be realistic. It seems more likely, with Turkey, Iran and Russia unifying efforts, that the new chapter might involve more words and fewer bullets, where politics will be the tool to transform the anti-Assad struggle into a much weaker insurgency. Assad perhaps should thank his adversaries — inside and outside Syria — for having been so divided in a battle that seemed, at the beginning, to have been a rare opportunity to unite all those against him.

The only element that shouldn’t be ignored is the Islamic State (IS). IS isn’t weak, as many might think, and its surprises in Syria still might be coming. Its battle to the north of Aleppo for the city of al-Bab with Turkish forces, who have been badly bruised, tells a lot. So does IS’ retaking of the historic city of Palmyra, which should be an alarm for all parties involved in the Syrian war.