Iran and its allies, such as Hezbollah, seem to be getting more involved in the Syrian civil war. 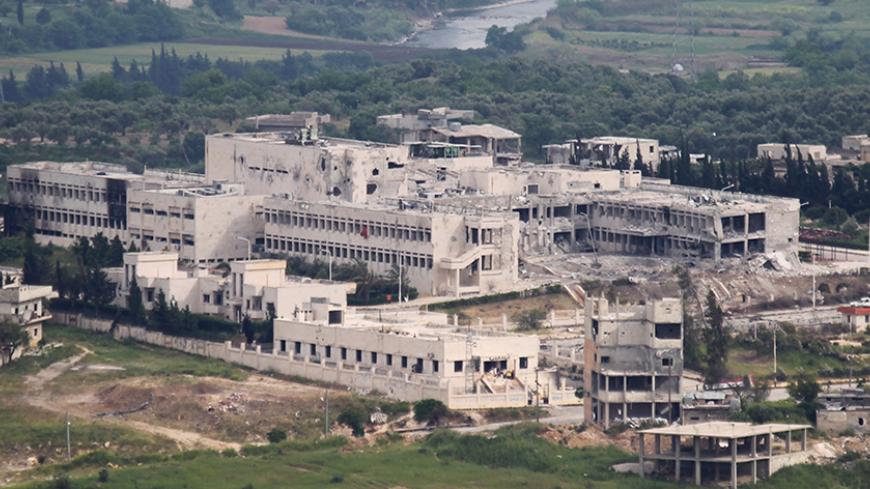 A general view shows a besieged hospital on May 3, 2015, in what was the last remaining Syrian army foothold in the town of Jisr al-Shughur in the province of Idlib. - REUTERS/Ammar Abdullah

For the past four years, the Islamic Republic of Iran has been involved thoroughly in the developments taking place in Syria. The Iranian role reached its peak with the decision to defend the Syrian regime with all possible means, defining the war taking place in Syria as a battle between the resistance bloc and its enemies. Iran’s close allies around the region — with the help of Iranian experts and officers — deployed to Syria, with Lebanon’s Hezbollah becoming the main group fighting on Syrian soil beside the Syrian army and helping on several occasions to retake areas that had been taken by rebel groups. This happened in Qusair and Yabrud on the Lebanese Syrian borders, Homs, areas in Aleppo where some Shiite communities live and the outskirts of Damascus, where the holy shrine of Zeinab, the granddaughter of Prophet Muhammad, is situated.

“The resistance bloc is in Syria to help the legitimate Syrian government in its battle against terrorists and at the same time to maintain its interests there,” an Iranian military source told Al-Monitor. “Hezbollah’s role in Syria was part of its resistance role on the borders with Palestine, yet this is going to change.” The Iranian military source said that as a result of change on the battlefield and developments in the region, “The resistance bloc as a whole is going to assume responsibility wherever there’s a need for help across Syria — it doesn’t matter if it’s Raqqa, Deir ez-Zor, Aleppo, Idlib — even the number of fighters on the ground will witness a surge. There are thousands of volunteers waiting to join this holy war.”

In a speech May 5, Hezbollah Secretary-General Hassan Nasrallah said that his group’s men had begun fighting in new areas. “Lately, we went to places we weren't in during the past years,” he said. “We were where we needed to be, and we will be where we must be; we believe that this is not [just] the battle of the Syrian people, it is defending ourselves: Syria, Lebanon and the entire region.”

In the meantime, Hezbollah’s forces have been fighting at Qalamoun, along the Syrian-Lebanese border, although the clashes taking place in that area have not been officially called a battle to retake the area. Also, it has been confirmed that Hezbollah forces are accompanying the Syrian army in preparations to retake the cities of Idlib and Jisr al-Shughur, while staying on full alert for any developments that might occur in Aleppo, Hama or Latakia.

In Qalamoun, Hezbollah forces alongside the Syrian army are combating Jabhat al-Nusra, the Syrian branch of al-Qaeda, which controls a 50-kilometer (31-mile) corridor inside the Lebanese border and around 600 kilometers (373 miles) inside the Syrian border. Jabhat al-Nusra is said to have between 3,000 and 5,000 fighters in the area, which is seen as a strategic zone with its interconnections with Damascus, Homs and southern Syria, mainly the Golan Heights. On May 13, the Shiite group succeeded in taking control of Moussa’s Hill, a strategic post overseeing the border between Lebanon and Syria. Footage aired on Hezbollah’s Al-Manar TV showed the group’s fighters for the first time raising their yellow flag and mounting it, another indication Hezbollah changed its visual and news tactics of crediting the Syrian army only for all the battles they fought in the past two years.

The Lebanese group is functioning today in at least two countries outside its home country in the Middle East: Syria is one and the second is Iraq. In Iraq it has been confirmed that dozens of Lebanese experts are helping the Popular Mobilization Units in the war against the Islamic State. Critics of Hezbollah warn that the group’s overstretching will lead to major gaps on the front with Israel; they also point out that Hezbollah is causing tension in Lebanon by importing crises from other parts of the region to a country already facing its own crisis. Lebanon has been without a president for almost a year, and had to extend the parliament’s term due to the security situation and the difficulty in organizing elections around the country.

“It’s obvious that the number of Hezbollah fighters in Syria has doubled since 2013,” a Lebanese military source told Al-Monitor. “The organization is becoming bigger, and therefore there are no indications that the number of forces deployed in south Lebanon is being affected. According to my observations and information, Hezbollah is witnessing one of its fastest-growing periods in its history. Each month it is mobilizing around 500 new fighters.”

The Iranian military source said, “This is one of the biggest battles in the history of the Middle East. Thousands of people are giving their lives to defend what they believe in. This is happening on both sides — we believe we are the righteous and so does the other side. It’s not an easy task for anyone to blow himself up in a battle [rebel fighters], neither is it to stay for months away from their families. In the end there will be a victorious side and we hope it’s us.”

The source said, “The enemy is trying to wage a psychological war on our bloc by saying we are deserting Syria and giving it up in a bargain for a nuclear deal. But Syria was never on the table. The whole bloc is giving blood there and our blood isn’t so cheap to sell for a deal that the United States needs more than we do. In Syria we are fighting a holy war, a war to save this area from those who believe in the wrong version of Islam, from Wahhabism that’s against both Sunnis and Shiites. Should this war be one for the sake of a president and a regime, it shouldn’t have even happened. In Syria we are fighting for Islam, for the region, and we believe this as we believed in the 1979 [Iranian] revolution.”