Hezbollah gave the media a tour of parts of western Syria after seizing territory previously held by Jabhat al-Nusra. 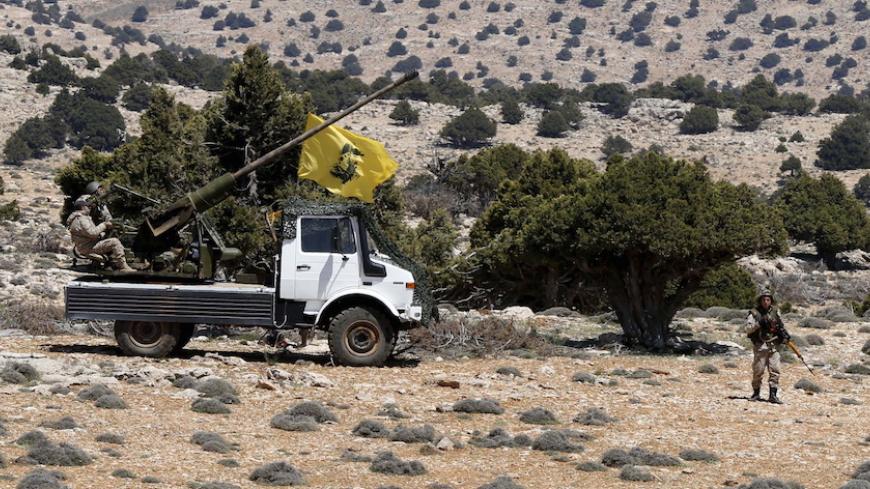 Lebanon's Hezbollah fighters rest on the back of a pickup truck with an installed weapon in Khashaat, in the Qalamoun region, after they advanced in the area, May 15, 2015. - REUTERS/Mohamed Azakir

QALAMOUN, Lebanon — Cellphones have been confiscated, and vehicles have been searched. The large group of Lebanese and foreign media representatives make their way across the border from the Lebanese Bekaa Valley into the Syrian Qalamoun region. Until recently, this mountainous area had been under the control of Jabhat al-Nusra and other armed militant groups. Now, after fierce battles that began May 6, Hezbollah fighters roam the territory, and military vehicles pass by bearing yellow flags with an image of the group's late Cmdr. Imad Mughniyeh. It is a sight that Hezbollah wants the world to see, which is why it organized this rare media field trip for May 15. Its media relations office informed the news outlets about the opportunity the night before.

The Hezbollah commander in charge of the military operations in the area is introduced. “No filming,” the organizers order. “You can only take notes.” The commander proceeds to give a short briefing about the geography of the areas that had experienced recent fighting, pointing to the mountaintops that Hezbollah had taken.

The briefing was followed by a detailed explanation featuring a map highlighting the approximately 300 square kilometers (116 square miles) he said Hezbollah and the Syrian army had seized. According to the commander, protecting Lebanese border villages, cutting militant supply lines and occupying strategic mountaintops have been among his fighters' main accomplishments.

This is a message Hezbollah is determined to drive home in an attempt to counter a rival narrative, which according to the movement, has played down its achievements. To enforce the group's message, after the briefing the camera crew was given the green light to film Hezbollah fighters, albeit at a distance, as they patrolled the area.

We then head to our next stop. Along the way, it is easy to spot remnants of the militants' presence. Vehicles struck in missile attacks and makeshift military fortifications are scattered about. The media convoy comes to a halt at a steep road, and another commander is introduced to the group.

“This is al-Jiba,” he said. He then pointed to what he told us was a military camp used by the militants to assemble booby-trapped cars they intended to send into Lebanon for terror attacks. He mentioned the presence of Lebanese license plates. A severely damaged pickup truck just meters from another severely damaged car litter the scene. Both were allegedly going to be sent on operations, said the commander, who added that Hezbollah fighters had struck them before they could be deployed.

The message here is just as important: Hezbollah is at war with terror. It is a message the movement has consistently repeated to justify its participation in the fighting in Syria, making the case that by fighting extremist groups there, it is defending Lebanon and the region from their terror.

That argument appears to have been bolstered by the spread of jihadist terrorism to countries far from Syria but that are nonetheless suffering from a phenomenon with its roots in the Syrian crisis. This turn of events has also become a crucial element in Hezbollah’s strategy, which has been laid out in recent speeches by Hezbollah Secretary-General Hassan Nasrallah. With terrorist atrocities being committed in Nigeria, Kenya and Pakistan, not to mention the numerous terror plots uncovered in Western countries, Hezbollah’s leader has become increasingly outspoken about the movement’s role in Syria.

In a televised speech on May 5, Nasrallah openly declared, "Lately, we went to places [in Syria] we weren't in during the past years." This strategy has gained in vigor, as the movement seeks to counter the media coverage of outlets affiliated with some Persian Gulf Arab states deemed hostile to the Syrian government. These media organizations, all of which support the ouster of Syrian President Bashar al-Assad, have recently presented the gains made by the anti-Assad forces in the north as evidence that the tide in the war is turning against the Syrian government. This is another part of the message Hezbollah is trying to counter by broadcasting images of its yellow flag planted on hilltops that used to be controlled by militant groups and by granting journalists a firsthand look at the situation on the ground.

Our tour ends with Hezbollah fighters waving goodbye as we head back to the other side of the border. Such media events might become routine as Hezbollah tries to convince the public that it is winning the war on terror.