Relations between Hamas and Iran have been especially tense since the group publicly condemned the violent battle for Aleppo. 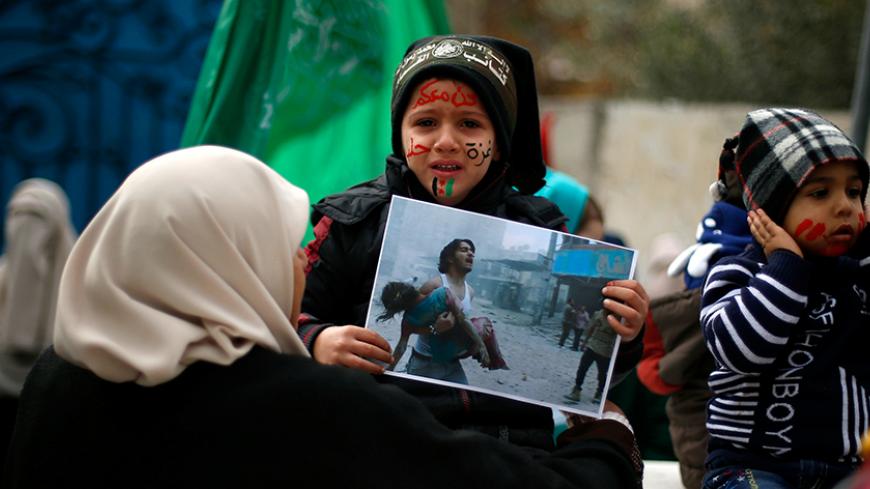 A Palestinian boy attends a protest in solidarity with the trapped citizens of Syria's Aleppo, in Gaza City, Gaza, Dec. 15, 2016. - REUTERS/Suhaib Salem

Hamas and Iran had moved closer to each other this year, but those ties are being stretched by the bloody civil war in Syria — especially with the horrible scenes that emerged earlier this month from Aleppo, the former rebel stronghold.

Hamas, a Sunni fundamentalist movement, has always differed from Iran on the Syrian civil war. Hamas sympathizes with the Syrian rebels in their revolt against the regime of President Bashar al-Assad — who is Iran's main ally in the region. Yet Iran has supported Hamas financially in the Palestinian struggle against Israel.

The balance was already precarious and the tipping point came in mid-December with the deaths and displacement of thousands of Aleppo inhabitants due to Syrian and Russian shelling and operations by Iran and Hezbollah. On Dec. 14, Hamas issued a scathing statement condemning the "genocide" of Syrian citizens, but without naming the Syrian government. Hamas called for immediate action to halt the massacres in Aleppo and rescue those civilians still alive.

Heshmatollah Falahatpisheh, a member of the Iranian parliament's Committee on National Security and Foreign Policy, told the conservative Ghanoun newspaper Dec. 22 that Hamas has long been estranged from Iran over the Syrian situation. Falahatpisheh accused Hamas leaders of unspecified aggression against Iran and threatened to halt any dealings with Hamas and to engage in new relations with other Palestinian movements.

Falahatpisheh’s threats come in light not only of Hamas’ statements in support of Aleppo, but also Hamas’ pursuit of the Iran-affiliated Al-Sabireen movement in Gaza. The Lebanese newspaper Al-Akhbar, which has ties to Hamas rival Hezbollah, said Dec. 16 that Hamas-led security services in Gaza had investigated some people who had expressed support for Iranian and Syrian forces’ control of Aleppo. The investigated figures included Hisham Salem, the Al-Sabireen leader who had voiced support for the takeover in Aleppo and congratulated the Syrian army and Hezbollah on controlling the city.

Hamas spokesman Husam Bsdran told Al-Monitor, “Hamas is a national liberation movement. It defends the rights of the Palestinian people under Israeli occupation. For this reason, it expressed its distress over the situation of Aleppo’s civilians. But this will not change our foreign relations. I do not think our solidarity with any people will negatively affect our relations. We wish for stability and freedom for all Arab people because that would support the Palestinian cause.”

Osama Hamdan, Hamas' head of international relations, also told Al-Monitor, “Palestinians in Gaza sympathize with the tragic scenes from Aleppo because they lived a similar experience in the Israeli wars against them in 2008, 2012 and 2014. They know what it is like to be displaced and left homeless. No party should be criticized for this public sympathy from Palestinians.”

Several members of Hamas' political bureau also commented on the conditions in Aleppo. Its head, Khaled Meshaal, said Dec. 17 that Hamas grieved for Aleppo's people. The day before, member Mahmoud al-Zahhar condemned the massacres and said they lacked any ethical or religious justification. On Dec. 14, member Khalil al-Haya called for a stop to Aleppo’s bloodbath.

Adding to the dissent against Iran, the Palestinian Scholars Association, which is close to Hamas, staged a demonstration Dec. 17 in Gaza in solidarity with Aleppo and said the crimes committed against the city amounted to aid for the Israeli enemy. Association members warned against deliberate provocations between Sunnis and Shiites and rejected what they said was the Russian army’s call to murder Syrians. The Hamas Women’s Movement staged a demonstration in Gaza on Dec. 15. In Lebanon, Hamas canceled its Dec. 15 anniversary celebrations in solidarity with Aleppo.

Qassem Qaseer, a Lebanese politician close to Hezbollah, told Al-Monitor that while Hamas' public comments and actions did bother Iran and Hezbollah, the Iran-Hamas relationship is not in jeopardy. "Hamas could have kept silent about the incidents in Syria, because it must think about its political interests and maintain all the support it can get, rather than react emotionally. But the relationship between Hamas and Iran still stands despite its twists and turns.”

Anbari, the Iranian analyst, also thinks the relationship will survive. He said, “The status quo in Syria, Iraq and Yemen will affect relations between Hamas and Iran. I do not think it will reach a boycott because the relations have not been completely cut off and [communications] between both sides are ongoing, despite their fluctuations and although Hamas and Iran do not see eye to eye on several regional affairs.”

The Israeli press is heavily covering the dispute between Hamas and Iran. Yuni Bin Manahim, an Israeli commentator on Arab affairs, noted on the News 1 website Dec. 18 that Hamas doesn't want to endanger the financial support it enjoys from Iran, but the Syrian developments might have a negative effect.

A Lebanese official who is well informed on the relations between Hamas and Iran told Al-Monitor on condition of anonymity, “Hamas’ recent stance regarding Aleppo might trigger the anti-Hamas conservatives and the Iranian Revolutionary Guard Corps’ inclination to halt their support for the movement, which has been going against Iran’s stances in the region, especially in Syria, Iraq and Yemen.”

There are no verifiable figures available on Iran’s financial support for Hamas, but Al Jazeera estimated in July 2015 that the amount exceeded $250 million per year between 2006 and 2012, before decreasing due to the dispute over Syria.

Adding to the tension, there is division among Hamas members over which path to follow.

Khaled Safi, a political science professor at Al-Aqsa University in Gaza, told Al-Monitor, “The disputes between Hamas and Iran regarding Aleppo stem from the presence of two currents within the movement — one calling for distance from Iran to avoid angering the Muslim Brotherhood involved in the Syrian revolution, and another calling for embracing Iran to maintain its military and financial support. For this reason, Hamas does not have a unified stance vis-a-vis Iran. Therefore, their interaction is unstable and marked by many fluctuations.”