Now that sanctions have been lifted against Iran, Palestinian resistance factions in Gaza are waiting to see if Iran will restore or perhaps increase its military and financial support. 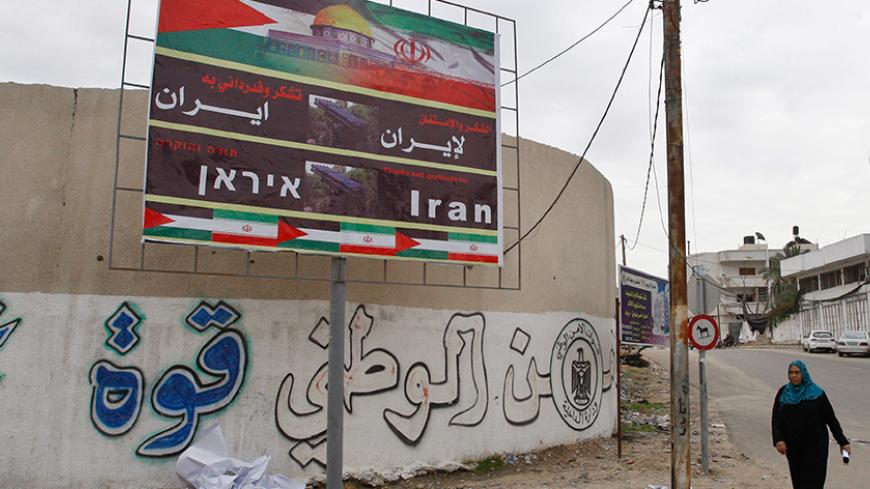 A Palestinian woman walks next to a banner that reads, "Thanks and gratitude to Iran," in Gaza City, Nov. 27, 2012. - REUTERS/Ahmed Zakot

GAZA CITY, Gaza Strip — As Palestinians hope for a potential windfall of support from Iran's newly restored wealth, some observers are warning them not to hold their breath.

Iran has provided financial and military support for some Palestinian factions in the Gaza Strip, especially Hamas and the Islamic Jihad, since the early 1990s. But Iran dramatically reduced this support in early 2011, when the factions refused to take sides in the ongoing war in Syria.

Now that the crippling sanctions that had been in place against Iran since 1979 were lifted Jan. 16, these groups hope to benefit. However, Tehran's stance on Syria hasn't changed, so observers believe Iran isn't likely to increase its support unless the factions side with Iran — and they don't appear ready to do so.

The only Palestinian faction to even comment publicly on the sanctions removal was the pro-Iran Harakat Al-Sabireen (“Movement of Those Who Endure with Patience”), which called the agreement a victory for the nation and a sign of pride and strength.

“Iran's power is the strength of vulnerable people around the world, and all the free people must unite to fight the global arrogance and eliminate the Zionist entity from the land of Palestine,” Harakat Al-Sabireen said in an official statement issued Jan. 17.

Ahmed Yousef, a Hamas leader and political adviser to former Palestinian Authority Prime Minister Ismail Haniyeh, confirmed to Al-Monitor that although the financial and military support Iran provides to the movement’s military wing has never stopped, it has been reduced over the past five years, and the movement has especially distanced itself from the Syrian war.

He stressed that all Palestinian resistance forces need Iran’s financial, political and military support. He said Iran publicly shows its support for them as a challenge to the United States and Israel, which classify these factions as terrorist groups.

However, Yousef also reiterated Hamas' position not to intervene in other countries’ affairs, noting that his movement does not want to rupture relations with any country.

On Jan. 10, a column in Saudi newspaper Asharq al-Awsat had claimed Iran would “make a generous political and financial offer for Hamas and the Palestinian cause and recognize the movement as a representative of the Palestinian people on the condition that Hamas supports Iran in its conflict with Saudi Arabia.” Iran and Saudi Arabia have cut diplomatic ties.

Hamas rejected the offer, even though it has lost financial and political support from some other countries over internal disputes and bloody conflicts in Arab countries like Syria, Yemen and Egypt. Hamas considers itself closer to the Sunni Arab countries than to the Shiite Iranian state.

Similarly, the Islamic Jihad said that while it considers the sanctions removal a step in the right direction, it doesn't count on the lifting of sanctions to increase support for his movement.

Mohammad Saadi, a member of the Islamic Jihad’s political bureau, told Al-Monitor that despite leaks to the media in early January claiming relations between the movement and Iran have been strained, the two share a good relationship. Iran had largely reduced its support for the Islamic Jihad because the movement adopted a position similar to Hamas’ stance of distancing itself from the Syrian and Yemeni issues.

Despite the yearslong disagreement among Palestinians over the nature and motives of Iranian support, the Palestinian Authority and Palestinian factions agree that it is necessary in this critical period to avoid involving the Palestinian cause in regional conflicts and for Palestinians to remain on good terms with the countries involved.

“Palestinians need to reduce the tension in their relations with countries around the world … as such tension draws the Arab, Islamic and international attention away from the Palestinian cause,” Masarat director Hani Masri told Al-Monitor.

He explained that Iran — through support for Palestinians and groups such as Hezbollah in Lebanon and the Houthis in Yemen — aims to expand its influence in the region. However, easing Arab hostility toward Iran would reduce Iran's need to use such groups for that purpose.

In an interview with Al-Monitor, political analyst Akram Attallah ruled out the possibility of Iran increasing its support for Palestinians despite the financial liquidity it is gaining now that the sanctions have been lifted. As with other observers, he noted that after the Palestinian factions saw that the conflict in Syria and Yemen was becoming sectarian in nature, they favored their Sunni doctrine over Shiite support. Therefore, Iran is more likely to support other parties such as Yemen, Syria and others in heated areas where it aims to spread its influence.

“Leaks claiming Hamas made its final decision and refused to stand by Iran against Saudi Arabia reinforced the hypothesis that Iranian support for the Palestinians would be reduced or suspended,” said Attallah. He added, however, that Iran still sees Hamas' military wing “as an acceptable party to receive support, as it confronts Israel, along with the pro-Iran Harakat Al-Sabireen.”