Is Iran behind spread of Shiism in Gaza?

The people of the Gaza Strip fear Iran’s support for Hamas aims to spread Shiism in the Sunni-majority enclave. 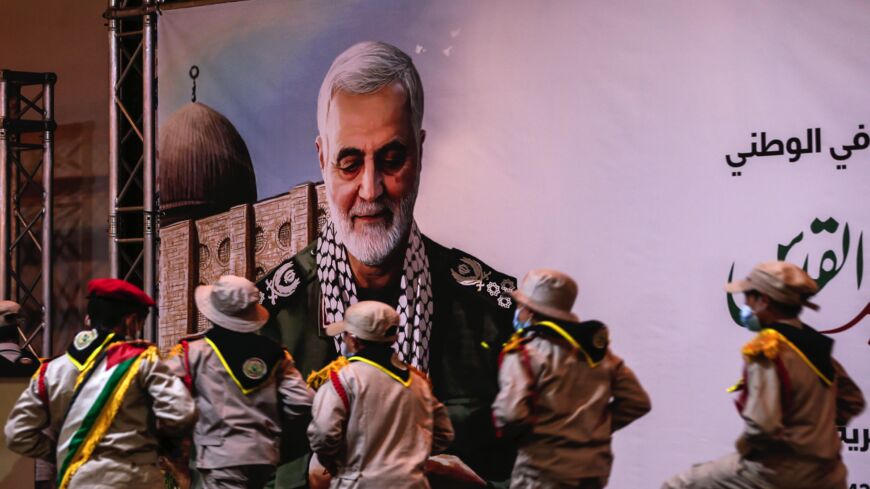 The Gaza Strip's population has long been predominantly Sunni, with almost no presence of Shiism. But growing Iranian support for some small Palestinian groups in the enclave has led to a spread of Shiism among faction leaders.

This is the case with Harakat al-Sabireen (Movement of Those Who Endure With Patience). The Hamas government had banned Harakat al-Sabireen and its activities in Gaza in 2015 but failed to suspend its Iranian-backed charity, the Imam Khomeini Relief Foundation.

The protests caused shockwaves across Palestinian society and were denounced by a number of activists. Some described the protests as being staged in light of Iranian funding; others described them as aimed at promoting Shiism among Gazans.

While Iran is known for its support for predominantly Shiite "resistance" movements throughout the region — including Lebanon’s Hezbollah, the Houthis in Yemen and certain militias in Iraq and Syria — it also supports Hamas and Islamic Jihad, which are Sunni. Less well covered, and less understood, is its support for these and other groups, including foundations, which promote Shiism and may encourage conversion.

Talal Okal, a political analyst and writer for the Palestinian Al-Ayyam newspaper, spoke to Al-Monitor about conversion to Shiism in Gaza. Okal stressed that “religious affiliation is a right for every human being, whether a Christian, Muslim, Jew or Shiite Muslim. Originally, Palestine’s inhabitants were Christians, Jews and Sunnis. However, some are [currently] converting to Shiism for political reasons.”

“Iran has a strong and radical stance toward the Palestinians and [Israel]. It has always supported the Palestinian resistance. Therefore, it is likely for some people [in Gaza] to convert to Shiism. This is all the more true, since the countries of Sunni-majority have almost abandoned the Palestinian cause and some even normalized ties with Israel," Okal said.

“However, despite the political factor that prompted some to turn to Shiism, the phenomenon of Shiitazation in Palestine remains so far limited,” he added.

Okal continued, “We are witnessing harmless individual cases of conversion to Shiism in the Gaza Strip. Those who turned Shiite are limited in number and activity. Meanwhile, Hamas considers itself an independent movement that receives support from Iran just like from other countries that are part of the resistance axis. It therefore refuses Shiite converts whom it accuses of being tools exploited by Iran for political objectives in the Gaza Strip, which can derail Hamas’ political calculations in the conflict with Israel.”

He added, “Hamas is originally part of the Muslim Brotherhood, a transnational Sunni Islamist organization. However, more recently, politics and public interests govern relations, and not religion. Iran has an interest in supporting the Sunni and non-Sunni resistance, and in turn the Sunni and non-Sunni resistance want this support and cooperate with those who stand by it against Israel.”

Saleh al-Raqab, a professor of Islamic faith at the Islamic University of Gaza and a former minister of endowments, told Al-Monitor, “I have published many books on Shiites and Shiitization, because I have noticed the recent attempts to spread the Twelver Shiism in the Arab world, including in the Palestinian territories, specifically in Gaza.”

Raqab explained that “some groups on social media platforms are promoting ideas of Shiism by highlighting Shiite concepts such as the love of the prophet's family, the unjust death of the Husayn and others. These [groups] take advantage of the poor conditions of the Gazans and their weak religiosity to lure them to Shiism. For this purpose, some are even organizing recreational trips and building hospitals and other facilities under the guise of charitable projects.”

He added, “Hamas may have confiscated these groups’ weapons and restricted their movements, but it did not change their ideas nor block their funding from Iran. Next month is Ramadan, and the foundations of these Shiite groups will start distributing food rations with a photo of Ayatollah Khomeini on the packaging.”

Raqab concluded, “The whole world is wrestling over Gaza, and some, including Iran, want Gaza to convert to Shiism. But the internal security apparatus has so far foiled their plan.”

A Gazan who has converted to Shiism, who spoke to Al-Monitor on condition of anonymity, said, “Talk about Sunnis and Shiites is very sensitive and complicated. I probably would not have spoken to you [Al-Monitor’s contributor] if you were inside Gaza. A friend of mine, Mithqal al-Salmi, was killed because he converted to Shiism. He only expressed love for the prophet’s family (Ahl al-Bayt), but he never criticized Islam, as some claim. He only believed in the hadith of the twelve successors, and he never blasphemed against Allah or talked bad about people. Salmi was arrested and tortured by the Hamas government on several occasions before he was killed. Why would they not accept the other based solely on their faith, why would they kill him bases of his beliefs?”

“As for me, I used to share on my Facebook page my thoughts and beliefs about Husayn ibn Ali and Ahl al-Bayt. But the security forces summoned me and a sheikh questioned me and said that I am a Shiite because I believe in Husayn ibn Ali. But Al-Azhar Sheikh Mahmoud Shaltut had issued a fatwa in 1959 recognizing the Shiite Jaafari school as one of Islam’s sects, just like the four Sunni sects,” he added.

There are no reliable figures on the number of Shiites in Gaza. The Shiite convert added that Shiites there “are afraid to express they views in public."