The newly elected members of Fatah’s Central Committee failed to appoint a vice president, as controversy surrounds imprisoned leader Marwan Barghouti, who received the highest number of votes at the movement’s internal elections. 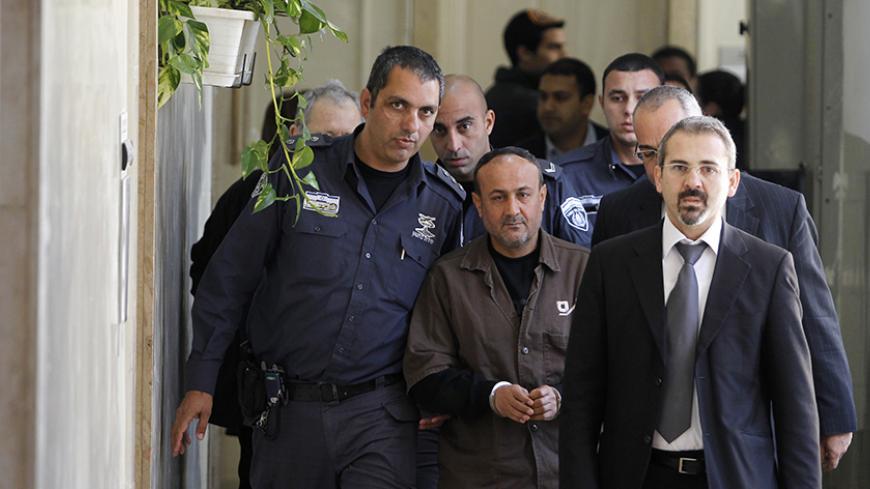 As Fatah's seventh general congress concluded Dec. 4, none of the top vote-getters from the internal elections had been selected for the position. Imprisoned Fatah leader Marwan Barghouti received the most votes in the Dec. 3 elections. Having scored 936 votes, Barghouti is qualified to serve as vice president, while Jibril Rajoub, a member of Fatah's Revolutionary Council, came in second with 838 votes.

Jordanian Al-Ghad newspaper cited Barghouti's lawyer Elias Sabbagh, speaking on his behalf, as saying, "This trust confided in me by my brothers in Fatah, allowing me to score the largest number of votes for the Central Committee elections, makes me hold on to the political path I have taken even more. I will continue working toward national unity … and will restore respect for national liberation and democratic choice."

A source close to Barghouti told Al-Monitor on condition of anonymity that Barghouti believes those who participated at the conference granted him the position. Barghouti thinks he should bear the responsibility that comes with such a position, even from behind bars, the source said.

Central Committee members are discussing the feasibility of that idea and should announce a decision by the end of the month, the source added.

Al-Monitor contacted Rajoub to comment on this issue, but he only said, "Let us wait and see how things develop in the coming days. This issue is not about the position of vice president alone; Fatah's statute will change to adapt to the current developments, to ensure membership and equality between all members."

Article 64 of Fatah's statute stipulates that the Central Committee shall elect a secretary and two vice presidents from among its members. However, the movement only appoints one vice president and the position is currently occupied by Abu Maher Ghneim, who was also appointed secretary during Fatah's sixth general congress in 2009.

"The vice president does not necessarily need to secure the highest number of votes in the internal elections during the congress; he is chosen by the 18 members of the Central Committee following discussions," Azzam al-Ahmad, a Central Committee member, told Al-Monitor.

Ahmad said the committee meeting held Dec. 5 was only for protocol; no tasks were distributed to members and no issue was addressed.

Meanwhile, Central Committee member Tawfiq Tirawi said he prefers Barghouti over Rajoub as vice president, which is not surprising as Tirawi and Rajoub competed for the highest number of votes during the congress. Tirawi told the media Dec. 6, "The person who deserves such a position is the one who had his share in the struggle [for the Palestinian cause] and the Central Committee should choose him."

Barghouti's vote tally stirred the ire of Israeli Prime Minister Benjamin Netanyahu, who told the press Dec. 6, "Barghouti's election [results are] proof of the growing culture of terrorism and extremism and a clear show of support to a convicted terrorist. Not only is Fatah inciting against Israel in schools and naming streets after perpetrators of operations [against Israel], it is flaunting them as its leaders and drifting away from establishing peace."

Barghouti was arrested by the Israeli army in 2002. He was given five life sentences plus 40 years in prison. Israel accused him of leading Fatah in the West Bank and held him responsible for armed operations carried out by Al-Aqsa Martyrs Brigades, Fatah's military wing, that had killed and wounded dozens of Israelis.

Naji Sharab, a political science professor at Al-Azhar University, told Al-Monitor that Barghouti's high number of votes proves he is the person the movement most agrees on, after President Mahmoud Abbas, and thus all those who voted for Barghouti want him to serve as vice president.

Sharab explained that choosing Barghouti to be the vice president would be the first real test facing the elected Central Committee, as it would challenge Israel's political discourse and its stance against Barghouti. However, since Barghouti is in jail, Sharab expects the Central Committee to choose Rajoub, who would then be Fatah's candidate in any future Palestinian presidential election.

Palestinian political analyst Alaa Rimawi told Al-Monitor that Barghouti's issue has become symbolic and Fatah is not seriously considering giving him a real role from behind bars. "Those who want Barghouti to have a true role within the movement should work on releasing him first," Rimawi noted.

Rimawi pointed out that Rajoub is one of the most influential people in Fatah and stands a good chance of becoming vice president, although some figures within the movement, such as Nasser al-Qudwa, believe they deserve the position.

He stressed that the conflict within Fatah and the Central Committee in particular, in terms of choosing a vice president, cannot be easily resolved in light of the intense competition. He also said it is more important for the movement to focus on relieving the stagnation of its political program, which has led Fatah downhill on all fronts.

Most observers believe Rajoub will become vice president, given his good relationship with Abbas, who would not want Barghouti as his vice president because it would incite Israel against the Palestinian Authority.