A proposed bill in Egypt’s parliament that would implement sweeping changes to laws concerning women has sparked outrage as women’s rights activists are calling for its immediate withdrawal. 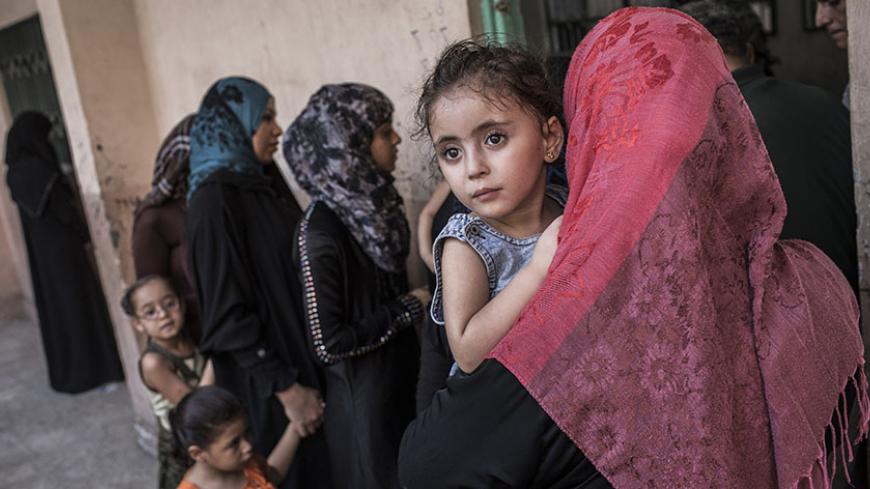 A girl is held by her mother as she lines up to cast her vote at a polling station in Cairo, June 17, 2012. - Getty Images/Daniel Berehulak

According to women's rights activists in Egypt, a new child custody proposal being considered by the Egyptian parliament is a step backward and an affront to Egyptian women, particularly divorced mothers.

Female parliament member Soheir El-Hadi along with 60 parliamentarians have submitted a bill amending Egypt's Personal Status Law 25 of 1929, which regulates all issues related to family, including marriage, divorce and child custody. Hadi's amendments have targeted certain articles on child custody, stirring a hornet's nest of controversy among parliamentarians and citizens.

Another hotly debated article stipulates that if a divorced mother who has custody remarries, child custody will be shifted to the wife of the father if he has remarried. Under the current law, if a divorced mother remarries, child custody is appointed to her mother, her mother-in-law or a sister. However, after several days of public outrage, Hadi released a press statement stressing that the draft law does not include this article.

"This illogical draft law must be withdrawn and canceled out in order not to be resubmitted," Dina Hussein, a senior member of the National Council for Women (NCW), told Al-Monitor, emphasizing that the draft law does include the article that Hadi has denied.

Hussein argued that the draft law "suffocates" mothers and deprives them of their right to remarry, as if they have committed a crime. She also wondered how the father's wife can care about children more than their own mother. "I know the current family laws need to be amended, but not that way."

In a quick response to this issue, the legislative committee of the NCW, the state-run entity that defends women's rights, is currently preparing a comprehensive draft law tackling all issues related to family. "Our draft law will put into consideration all previous proposals in this regard. It will be submitted to parliament soon," Hussein said.

Egypt's divorce rates are on the rise. In 2015, Egypt witnessed nearly 200,000 divorce cases, marking a 10.8% increase in divorces in comparison to the previous year, according to a report issued by the Central Agency for Public Mobilization and Statistics (CAPMAS).

According to CAPMAS, the highest divorce rates are among men who are 30-35 years old and women who are 25-30 years old.

In light of these official figures, Egypt's Personal Status Law has always been a subject of considerable debate. Protecting women's rights after divorce has been and remains the bellwether of this debate. That is why parliament member Suzy Nashed and some of her colleagues call for a total amendment of the Personal Status Law, not only the clauses related to child custody.

"I urge parliament members to postpone the discussion of the bill until the whole law is amended," Nashed, a member of parliament's Legislative Committee that is currently reviewing the draft law, said. "The current law is filled with loopholes that need to be reconsidered."

Regarding Hadi's controversial bill, Nashed said the bill should put clear restrictions and guarantees that ensure the divorced fathers will bring the children back to their mothers. "What will happen if the father abducts the child and travels abroad?" she asked.

Women's rights movements in Egypt are shocked by the child custody bill that, instead of empowering women, adds to their suffering. Much to their surprise, the bill was submitted by a female parliamentarian who should have supported women rather than turning against them.

Women's rights movements have voiced their anger because of the proposed articles and the legislative process, in general.

Eman Bibars, a leading feminist and the chairwoman of the Association for the Development and Enhancement of Women (ADEW), told Al-Monitor, "I cannot believe that bills are being submitted and reviewed without conducting a community dialogue or even resorting to expert opinions. The lack of transparency is hazardous."

Bibars also raised questions about the qualifications of those who submit draft laws, citing the new law of nongovernmental organizations as an example. The law regulating the work of NGOs has been reviewed and approved without involving either legal experts or civil society representatives.

Commenting on the proposed bill, Bibars said its articles are loose and unclear. For instance, it gives fathers the right to spend two days with children on a weekly basis without mentioning the criteria for the place where they are to stay and without ensuring safeguards for the children's safety. Bibars added that claiming the father will be imprisoned in case of abducting the child is not realistic. "There are several cases of abduction, and no one has been held accountable," she said.

Bibars referred to the ADEW study that monitored the situation of around 10,000 divorced mothers in 2014. According to the study, 88% of divorced fathers do not pay alimony and 9% abduct their children. "How can those fathers be trusted to have the right to child custody?"

Nashed, for her part, said the draft law has not been approved yet, adding that the parliament will not approve any bill that may harm Egyptian mothers. "It is just a proposal. It can be approved or rejected. There is no reason for all this hustle."