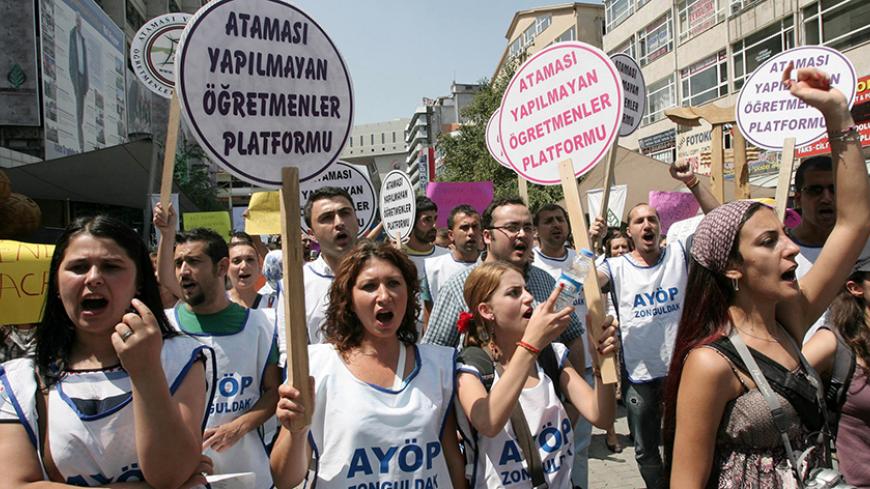 Turkey is currently preoccupied with many obvious problems. But there's one up-and-coming issue that deserves immediate attention, as it has the potential to become a major security risk: What happens when young people can't find jobs?

“I only have 150 lira [$40] in my pocket. I can live on that for 10 more days. Before the [government-Kurdish] clashes, I used to work in a restaurant, but now most of the city is in rubble and I have no job,” 21-year-old A.A., who wanted to be identified only by his initials, told Al-Monitor. He had just returned from Mardin to Turkey’s predominantly Kurdish town of Sirnak.

Asked if there is hope for the future, he said, “What hope? We live day to day."

A public official from Cizre — the town most affected by clashes between Turkish security forces and the Kurdistan Workers Party (PKK) — told Al-Monitor the town is trying hard to find jobs for young people through the state employment agency, but the effort hasn’t been enough.

“Local authorities are painfully aware of the growing youth unemployment in the areas of clashes," said the official, who also asked to remain anonymous. "They are trying to find solutions by creating employment for them in urban reconstruction projects. But this is a problem that cannot be alleviated by day-to-day solutions. It goes deeper. It is structural."

The youth unemployment problem in Turkey can no longer be solved with short-term and makeshift localized solutions. Parallel to the economic slowdown plaguing the country for a year, the unemployment rate has also risen. According to the Turkish Statistical Institute (TUIK), unemployment in Turkey reached 11.3% in August. Since August 2015, the number of unemployed Turks has grown by 435,000 (1.2 percentage points).

For years, Turkey’s youth unemployment rate has been below the European Union average. But in June, for the first time, it surpassed the EU average of 18.5% to reach 19.9%.

“The period of economic slowdown is particularly hard on new graduates who are looking for their first jobs. When we can’t provide employment for the new graduates, instead of a generation of producers we end up with a generation of consumers. Today one of six men ages 15-29 and one in every five women are unemployed,” economist Ozcan Kadioglu of the daily Dunya told Al-Monitor.

Data from the Organization for Economic Cooperation and Development gives an even bleaker picture of youth unemployment in Turkey. About 28% of the 15-29 age group in Turkey are classified as NEET — youth "not in employment, education or training." According to the organization, the NEET group costs Turkey 3.4% of gross national product, about $25 billion.

Of course, some say that a large portion of this group is actually working but unregistered, without social security. Though there is no reliable figure for this supposition, many observers agree this is the case, especially among those in the upper range of the age group.

Why are the 15- to 21-year-olds not in school? In another disturbing finding, the higher the education level, the higher the unemployment rate. In other words, there are more unemployed university graduates than those who have only gone through elementary schooling. The issue of qualified but unemployed young people is becoming more serious.

According to TUIK, as of December 2014, 29.4% of Turkey's 78 million people were aged 17 and under. In the heavily Kurdish southeast Anatolia area, minors make up half the population.

Also according TUIK data, Cizre — the town most affected by the violence — had a population of 120,000 in 2014. Of that number, 70% were below 30 years of age and 40% were younger than 20. TUIK says the average age in Cizre is 19. Many other towns and cities in the southeast follow a similar pattern.

From those figures, about half of the below-30 men (30,0000-40,000) don’t have steady employment. The worst off are those looking for jobs in the service sector.

A public official reached by phone who didn’t want to be identified told Al-Monitor that the town wants to employ these young people in the reconstruction projects coming to the region. “We are organizing accelerated training courses for these young people in construction, tiling, water and electricity installations. We hope they will then find jobs in these fields,” he added.

Kadioglu calls attention to another important dimension of the problem: “Growing youth unemployment means an increase in burglaries, petty crimes, fraud and domestic violence. Unemployed youth envy their peers who have good jobs, and this prods them into illegal endeavors to make money. We are observing a serious increase in [young people] joining organized crime gangs, trafficking narcotics and [committing] burglaries.”

Cizre resident Suleyman G., as he identified himself, has similar observations. “Before the clashes, we didn’t see idle young people hanging about in parks or on street corners in packs. Now in a park next to my house, we have young people congregating freely and displaying their daggers to the public. They are candidates for crimes,” he told Al-Monitor.

According to Kadioglu, the increase in youth unemployment, especially among the educated, is caused in part by misguided education policies.

“Turkey has never been able to establish vocational training schools that prepare the youth to go where the jobs are. Instead they are directed to universities. Most university graduates pursue civil servant jobs,” Kadioglu said.

In addition, he said, schools do not offer adequate foreign language education, and high school curricula are not geared to the needs of the technical sector.

In a nutshell, increasing unemployment among young people is emerging as a serious risk factor in Turkey. In towns and villages that are most affected by clashes with the PKK, youth unemployment has already emerged as a true security risk, encouraging youth to turn to crime or take up arms with the PKK. The issue has been fostering terror in the southeast more than any other factor. Sadly, as Ankara is fully committed to emptying the PKK's ranks by killing the members, no one seems to be studying how Turkey reached the point where its policies have become a rich recruitment tool for that very group.

Shouldn’t Turkey turn off the taps before it tries to drain the pool?