Turkish President Recep Tayyip Erdogan's aggressive foreign and security policies are coalescing into a clear doctrine of pre-emptive action that he seems to be using both to drum up domestic support and for leverage in negotiations with the West. 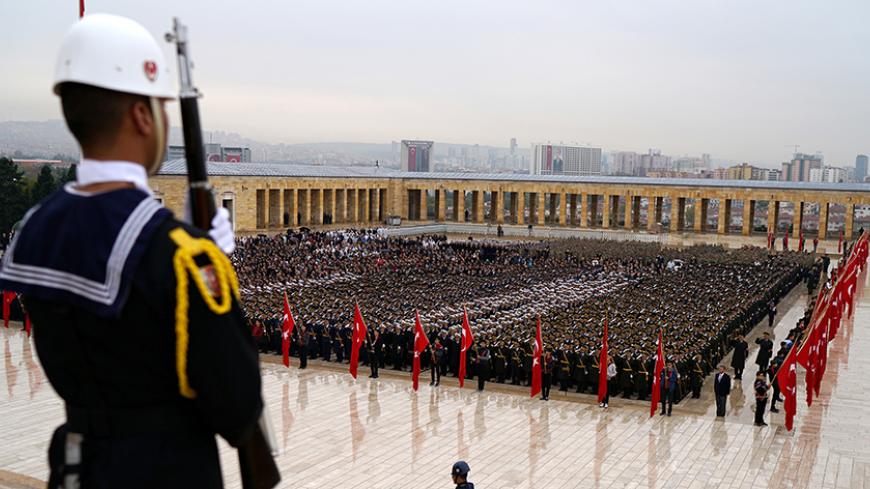 Turkish President Recep Tayyip Erdogan isn't known as a patient man. The new "Erdogan Doctrine" won't do much to change that.

The strategy is turning heads with its proactive stances. Erdogan recently hosted local village headmen at the presidential palace in Ankara. He definitely caught their attention when he said, “After today we won’t wait for border problems to break out. We won’t wait until the last minute, until we fully sink into a morass. From now on, we will confront problems. Is there a problem with terror? We won’t wait for terror outfits to strike us. Wherever they are, we will go find them and hit them hard.”

The core of this new security approach, which was given the Erdogan Doctrine moniker by pro-government media, is that with the external problems and security threats it faces, Turkey must adopt proactive and preventive policies. The doctrine, widely discussed in Ankara corridors and in the media, is a turning point in proactive security and foreign policy. This doctrine actually very much resembles the 2002 definition of then-US President George W. Bush's National Security Strategy: "pre-emption," defined as "pre-emptive and preventive action."

An Oct. 25 article in the pro-government daily Yeni Safak written by Saban Kardas, the chairman of the Ankara-based Center for Middle Eastern Strategic Studies, offers some insight into the doctrine. The strategy involves concepts such as the effective use of military force beyond borders when needed, the possible disregard of traditional alliance relations and taking unilateral action independent of the United States and NATO.

According to Kardas, in Erdogan’s doctrine, the top-priority threats are northern Syria and the Kurdistan Workers Party (PKK), whose effectiveness is increasing in Iraq. Kardas wrote, “When you consider their recruitment potential, advanced weapons and experience, you understand it would be impossible to cope with the PKK and other risks without a security policy that crosses borders.”

Nursin Guney, the head of the international relations department at Yildiz Technical University, wrote in her Nov. 2 article for Yeni Safak: “This change in Turkey's strategic concept is actually a refusal to be encircled, by moving on to offensive from defensive approaches. This is an operational reality. With the Euphrates Shield operation, Turkey has succeeded in eliminating the PKK corridor that was in the works in northern Syria.”

It is interesting and unusual that the new concept is being discussed at length in the Turkish media. One gets the impression the government is working hard to generate support from the Turkish public, which doesn’t usually favor cross-border operations, by promoting the doctrine of pre-emption as the sole method of combating the threats Turkey faces.

Under this doctrine, large-scale military redeployments in Turkey are now seen as routine. The latest such move was the transfer of the Ankara-based 28th Mechanized Infantry Brigade, known as the best-equipped unit in the army that also serves its strategic reserve, to Silopi on the Iraq border. In an Oct. 20 article, I had concluded that shifting major combat units to Silopi would signal Ankara’s serious intention to establish a safe zone north of Mosul. But the redeployment of the 28th Brigade alone doesn’t mean an operation in northern Iraq is imminent.

Security sources in Ankara cite three reasons for this generously reported major redeployment of a top-notch brigade. First, though not voiced, is the decision to move the 28th Mechanized Infantry Brigade away from the capital. We have to remember that the 2nd Armored Brigade units based in Istanbul were relocated to Islahiye on the Syrian border after the July 15 attempted coup. Similar moves to distance military units, especially air force squadrons, away from major cities are reported at other locations.

It is also likely that Ankara decided on widely publicized force redeployments to improve its hand in negotiations with the US administration by moving a strong unit with formidable offensive capability to within 80 miles of Mosul.

Finally, we have to keep in mind that Ankara is grossly perturbed by the PKK’s actions in Kirkuk and the intention of Shiite militias to move toward Tal Afar, which has a majority-Turkmen population.

Ankara clearly wants to have on hand a capable, ready-for-action unit that can be used in case of radical changes north and west of Mosul.

The last word, however, will come at the conclusion of diplomatic bargaining between Ankara and Washington. Unlike the sensationalized, ill-informed reports by some Turkish news outlets, the arrival of the 28th Brigade at Silopi doesn’t signal an imminent operation in northern Iraq.

Although Ankara is trying to prepare the public psychologically for a possible operation in Iraq, the reality isn't that simple. There is a significant disconnect between the narrative, especially the one inspired by the government, and the reality of being able to execute it. We understand from our political echelons, primarily Erdogan, that Ankara has vital interests in Syria: in the Afrin canton, which is controlled by the PKK-affiliated Kurdish People's Protection Units (YPG), nearby Al Bab, and the Kobani canton east of the Euphrates and Raqqa to its south. And in Iraq, he is interested in the Sinjar area, which links Iraq with Syria, and finally the region north of Mosul. Ankara follows developments in all these areas closely and is determined to eliminate the PKK-YPG threat there before it gets too close to Turkey.

Now we are all justified in asking: Can Ankara handle this new concept? A sound analysis is needed to understand whether Turkey’s military capacity is sufficient to back up its ambitious narrative. No doubt there are many in Baghdad and Washington trying to answer this critical question.

And what about Russia? Does it think Turkey can live up to its ambitions? Moscow hosted Turkish Chief of General Staff Hulusi Akar along with Hakan Fidan, Turkey's intelligence chief, from Oct. 29 to Nov. 1 — and probably asked them personally.