What fate awaits Kurds fighting for the Islamic State?

The future seems desolate — and short — for Kurds who joined IS. 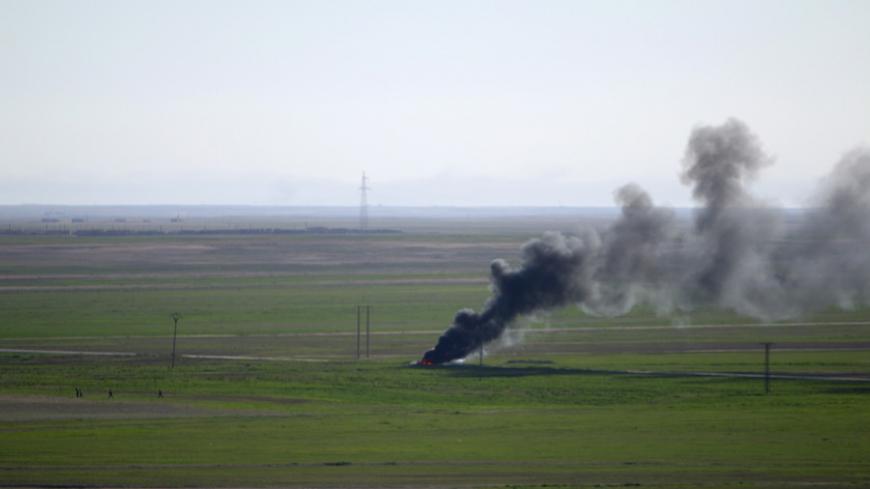 Smoke rises from an Islamic State vehicle near al-Shadadi town in the Hasakah countryside of Syria, Feb. 18, 2016. - REUTERS/Rodi Said

DIYARBAKIR, Turkey — In the battle for Mosul in Iraq, the Islamic State (IS) is losing power and, simultaneously, its Kurdish fighters, as forces spearheaded by the Kurdistan Regional Government (KRG) peshmerga advance.

Like the Kurds of Turkey, in recent years, Kurds in Iraq, Syria and Iran began identifying with IS. After IS turned Iraq into a battlefield, hundreds of Kurds joined. Kurdish young people became interested in IS not only because of the strengthening Islamic movement in the Kurdistan Region, but also because of social and political crises. According to the KRG's Religious Affairs Department, in the past three years more than 500 people ages 11-25 joined IS from Iraqi Kurdistan alone.

More Kurds are believed to have joined from Iran. So far, about 150 Kurds have been apprehended or have surrendered to Kurdish security forces; some remain within the group. IS made an enormous effort to recruit Kurds and even established a battalion bearing the name of an influential Kurdish commander, Salahaddin Eyyubi. However, because their numbers were few and many were killed in operations, the battalion was abolished.

It's hard for many people to understand why so many Kurds joined IS, which has carried out major attacks against Kurds. Though IS has recruited Kurds heavily, it also has released videos and information that would seem to have the opposite effect.

Kurdish communities were particularly resentful of a propaganda video IS released in January 2015. It showed three IS militants guarding a Kurdish peshmerga fighter later identified as Hucam Surci. By the end of the clip, one of the IS militants beheads Surci. Kurdish officials disclosed that the executioner was Mofak Esad Iskender — himself a Kurd. Iskender had run a bakery in the Kurdistan Region area before joining IS with his two brothers after IS captured Mosul in 2014. Iskender was later slain by other Kurds.

Another IS propaganda clip attracted attention as well. It also presented a Kurdish executioner for IS. The Syrian press said this man was known as "The Bulldozer" inside the organization and had executed many people.

Journalist and terrorism expert Cemal Huseyin, who lives in the Kurdistan Region, believes most of the Kurds who joined IS have been killed. And for those still alive, many IS Kurds believe death will be their only option, he told Al-Monitor.

“No Kurd has been given an important post in IS. Moreover, their numbers are insignificant. Most of the Kurds who joined IS are not alive now. Those still alive will have the same fate," he told Al-Monitor. "They have no choice but to stay on and get killed."

Huseyin cited some other reasons Kurds remain in IS ranks.

“Nothing except IS can unite these Kurds. That is why they will stay. Since they don’t have a Kurdish leader in IS, they cannot get organized and act as a group. Only Mala Shwan emerged as a strong Kurd in IS, but he was soon killed at Havice. Today, Kurds in [IS] are scattered all over. Some could split from IS and join Jaish al-Fatah [Army of Conquest]. Al-Qaeda sees itself as an alternate IS and is trying to bring them together under its banner. After [IS leader Abu Bakr] al-Baghdadi is killed, a major segment of IS is likely to join al-Qaeda,” he said.

Marwan Naksibendi, a senior official of the KRG's Religious Affairs Department, also believes the number of Kurds in IS has dwindled significantly, to perhaps 35. He is unsure of their status and told Al-Monitor they might even have fled to Europe.

Of the 150 who either abandoned IS and returned to Kurdistan or were captured, some have finished their prison terms and returned to their normal lives, he said. "Some are still under detention and their rehabilitation continues. In the last year, nobody from the [Kurdistan Region] has gone over to IS. In some cases, families have applied to KRG security agencies … and asked for help to bring their children back. They were given help. Some of those who have surrendered will be set free after investigations, but they will be watched,” Naksibendi told Al-Monitor.

He added, however, that there are still IS sympathizers in the Kurdistan Region, as well as sleeper cells and individuals secretly working for IS.

IS does not trust the Kurds, he said, especially after the blows IS has received from Kurdish peshmerga. “Kurdish security forces have been effective against IS. Our religious people are struggling against IS in mosques. Most Kurds support security agencies. That is why IS has given up on the Kurds in southern [Iraq],” he added.

Naksibendi thinks most of the Kurds in IS are from Iran. He also believes many Kurds who joined IS traveled to Syria via Turkey. Some joined IS in Baghdad and Anbar province in Iraq. Most of the Iraqi Kurds who remain in IS operate in the Iraq areas of Mosul, Hawija, Erbil and Kirkuk, he said.

There have been a significant number of Turkish Kurds who joined IS. At one point, IS formed units made up of Turkish Kurds called Bizanttiye in Tell Abyad, Syria. IS has frequently used Turkish Kurds in suicide attacks inside Turkey. Security sources said many Kurds are recruited from the Bingol and Adiyaman provinces of Turkey, and Halabja in the Kurdistan Region.