The Islamic State is exploiting divides in Iraqi Kurdistan to radicalize youths. 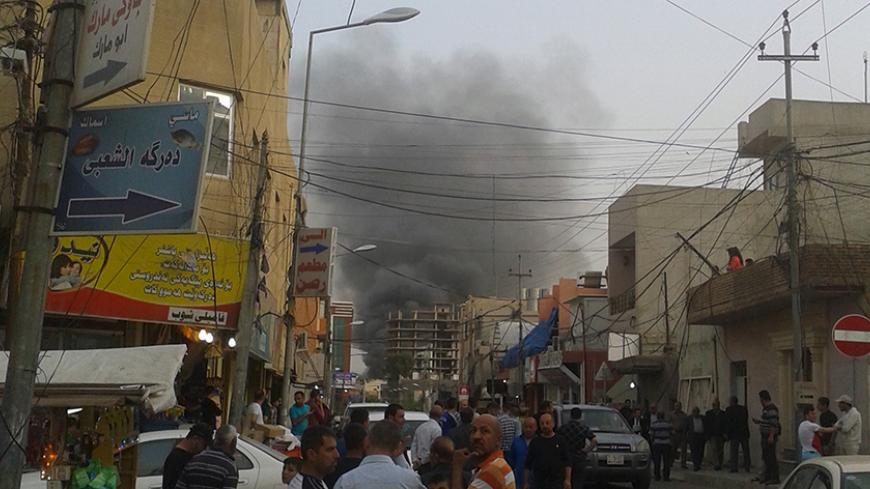 Smoke rises from the site of a bomb attack in Erbil, the capital of Iraqi Kurdistan, April 17, 2015. - REUTERS/Stringer

About two weeks ago, Iraqi Kurdish security forces (asayish) captured another ring of terrorists who were planning a deadly attack on Erbil city. Their ability to effectively obstruct this heinous plot, aided by the brother of one co-conspirer, saved lives and uncovered the identity of the perpetrators: Kurdish residents of Erbil who professed their loyalty to Islamic State (IS) leader Abu Bakr al-Baghdadi and were linked together by a mosque and the Internet. The local roots of the plotters — as well as previous ones — indicates IS’ societal reach beyond the front lines of Iraq’s disputed territories. The terrorist group has been able to feed off and radicalize Kurds not only through extreme Salafist ideology but deep grievances tied to economic and political conditions inside the Kurdistan Region of Iraq.

Since its onslaught on Mosul one year ago, IS has penetrated the Kurdistan Region on different fronts. The most evident has been along the Kurdistan Regional Government’s (KRG) new 1,000-kilometer (621-mile) front-line of the disputed territories, which has become a battlefield between radical Salafist-Sunni Arab nationalists, foreign fighters and Kurdish peshmerga. IS threats have also become embedded in the massive demographic shifts and spillover of Sunni Arab displaced persons into the Kurdistan Region — some 20% of the total Iraqi Sunni Arab population. These external threats have mandated vigilant KRG border security and travel limitations on mainly Arab populations to and within Iraqi Kurdistan.

Yet, IS has also targeted the Kurdistan Region by recruiting and radicalizing Kurdish youth. According to the KRG Ministry of Endowments and Religious Affairs, at least 500 Iraqi Kurdish youths have thus far joined IS to fight on the battleground in Mosul and Syria. One vehicle of local recruitment is the Kurdish mosques, and through local extremist Salafist clerics. Two of the most influential of these cleric-recruiters are Imam Gailani from Sulaimaniyah and Mullah Shwan, a well-known mullah linked to a mosque in Erbil under the auspices of the KRG’s Ministry of Religious Endowments. Mullah Shwan’s defection to IS was particularly shocking because he was considered a moderate religious leader and friend to the KRG Ministry of Religious Endowments.

What explains this turn to IS by otherwise moderate Kurdish Sunni Muslims within the relatively prosperous Kurdistan Region? Radicalization is not a new phenomenon in Iraqi Kurdistan and is as much politically and economically inspired as it is ideologically motivated. It became salient before and during the Kurdish civil war (1994-98), when disaffected individuals and radicalized Islamists took advantage of the power vacuum to expand their influence. Some joined the Islamic Movement of Kurdistan while others turned to the mosques in Erbil where "night classes" were being conducted and in which extremist cells took root — the precursors to Ansar al-Islam. It is during this period that the term “teachers by day, terrorists by night” became popularized and referred to the average local people, including university professors, who became part of the radicalized groups.

Indeed, the two main parties, the Kurdistan Democratic Party and the Patriotic Union of Kurdistan eventually banned the night classes, broke up and expelled radicalized Islamic cells to the Halabja-Iranian border area and later killed some Ansar leaders. They also started to politicize the mosques as a means of controlling Islamic leaders, co-opting Islamic groups and consolidating party patronage networks, particularly as they remained deeply divided in the post-civil war context. One way was through massive mosque construction and support. According to the KRG Ministry of Endowments and Religious Affairs, the Kurdistan Region has more mosques than any country in the world in terms of area and population: about 5,200 mosques for an estimated population of 4.8 million. Mosque construction also came with tax benefits and societal prestige (some localities have several mosques but not a high school for girls). In 2010 alone, local wealthy individuals built 500 mosques in the Kurdistan Region, half of which are in Erbil province. This effort has also included training and influencing mullahs, enforced government-approved sermons that encourage moderation and/or placing party-influenced clerics in charge to assure political support and prevent opposition. (Today in the Kurdistan Region, the term “Salafist” is considered by some as a mullah who supports the KRG.)

Even then, party control of the mosques and mullahs has not entirely prevented radicalization over time. Trends in the Kurdish media indicate that jihadi Salafist leaders are emitting radicalized messages on 10 different radio stations inside the Kurdistan Region. Nor are mosques the main or only source of IS recruitment. Most Kurds who have joined IS have not done so for ideology alone, if at all. According to an Iraqi Kurdish source who is related to and friendly with some Kurdish youths who joined and were killed by IS, none were recruited by the mosques. Rather, they were influenced by Salafist extremists while at university in Erbil and in turn, influenced friends from their hometown in an outlying area. Similarly, the person responsible for the car bomb in front of the US Consulate in Erbil in April 2015 was an engineer and graduate from the University of Salahuddin in Erbil.

Kurdish youths are also being radicalized by social media messaging and reacting to local political and economic conditions. Some have turned to IS because “they have no hopes in the Kurdistan Region.” Whether for ideological, political or financial reasons, many are reacting to the region’s endemic corruption, gross discrepancies in wealth and clear dichotomies that have emerged between the modernizing elites and conservative populations, and the haves and the have nots in Kurdish society. These gaps are being effectively exploited by IS.

The KRG has responded to IS infiltration by asserting greater control over the all Salafist clerics and the mosques, as well as tightening internal checkpoints. It also plans to establish courses to retrain and attempt to "moderate" the nearly 3,000 imams in the Kurdistan Region and to change the Islamic program in public schools, which is under the authority of the Ministry of Education. Many officials and local populations are further seeking to cease Salafist activities altogether, including closing down radical Islamic radio stations.

While these efforts are noteworthy, they do not fully get at the root of the problem. In a region where political grievances, corruption, economic disfranchisement, financial instability and poor education is rampant, Kurdish youth are particularly vulnerable to being brainwashed or enticed by IS and other radical groups. Kurdish and other officials seeking to counter IS should attempt to understand and alleviate the sources of deep and growing opposition to the KRG through effective political and economic solutions: job creation, merit-based education, opportunities for youth and tackling corruption. Without such measures and attention to vulnerable groups, pockets of extremism and IS opportunism will remain a significant threat to the region’s internal stability.