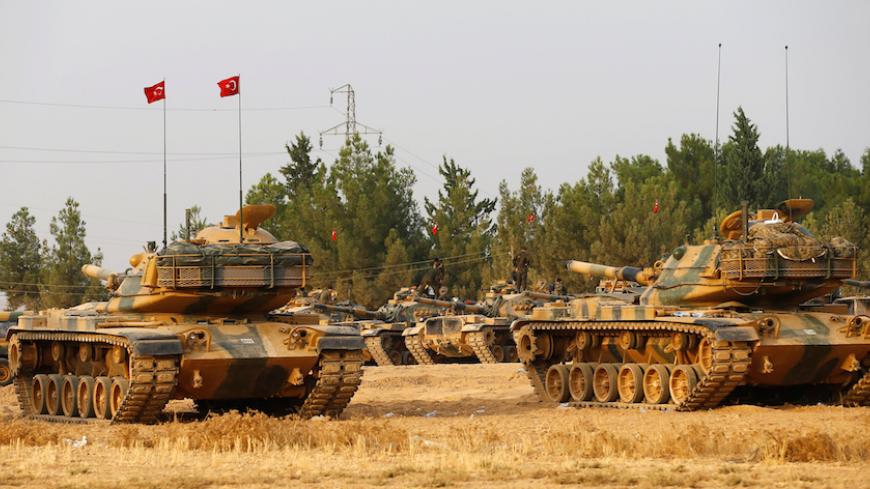 At first it was to clear Turkey’s border of the Islamic State (IS). Then it was to roll back the Syrian Kurdish militants of the People’s Protection Units (YPG). Today brought a brand-new explanation for why Turkish troops entered northern Syria in August to team up with opposition Free Syrian Army (FSA) rebels: “Why did we enter? We do not covet Syrian soil,” President Recep Tayyip Erdogan said in Istanbul at the Inter-Parliamentary Jerusalem Platform Symposium. “We entered there to end the rule of tyrant [Bashar] al-Assad. [We didn’t enter] for any other reason.”

Coming as Syrian regime forces appeared poised to regain control of rebel-held neighborhoods in eastern Aleppo, Erdogan’s comments suggest that Turkey will not be pulling the plug on its Syrian rebel proxies anytime soon. In fact, if his words are to be taken at face value, they signal an even deeper Turkish military engagement in Syria, pitting Turkish forces simultaneously against IS, the YPG and the regime.

This would leave Turkey at odds with the US-led coalition — which considers the YPG its top ally against IS — and with Russia, which wants Turkey to end its support for the FSA rebels. It would also inevitably raise the specter of more body bags coming home to Turkey. Added to all this, Erdogan’s statement belies recent speculation that Turkey was abandoning its long-running campaign to unseat Assad and was sending out feelers to Damascus, if only to join forces against the Kurds.

Since entering Jarablus in August, Turkish troops have succeeded in clearing the border of IS and have pushed further south, capturing the IS stronghold of Dabiq. Over the past month, however, they have — together with their rebel allies — been unsuccessfully struggling to dislodge the YPG from areas around the hotly contested IS-held town of al-Bab. Apparently, Ankara believed it had won Russian backing for that plan. The Nov. 24 deaths of at least four Turkish soldiers near al-Bab, in what the Turkish General Staff initially described as an airstrike by Syrian jets, threw cold water on such notions amid speculation that Russia might have been behind the attack.

Turkish Deputy Prime Minister Numan Kurtulmus announced Nov. 28 that Russian President Vladimir Putin had assured Turkey that its planes had not carried out the attack. Prime Minister Binali Yildirim will travel to Moscow on Dec. 5 to meet with his Russian counterpart, Dmitry Medvedev, and Putin, and Syria is certain to be a topic of discussion.

Meanwhile, Turkish officials speaking on strict condition of anonymity told Al-Monitor on Nov. 28 that they had concluded that the Assad regime was not responsible for the soldiers' deaths either. This, therefore, points to IS, which actually claimed responsibility for the attack. In further alarming news, IS also claimed, on Nov. 29, to have captured two Turkish soldiers in the village of Dana, west of al-Bab.

Coalition officials believe that an IS suicide bomb was the likely culprit for the Nov. 24 attack, but the waters have been further muddied by unconfirmed reports by local sources in northern Syria that an Iranian drone had been spotted in the skies above al-Bab when the attack occurred. Iran has armed drones, and there is video footage of Iranian drones purportedly hitting opposition rebels in Syria.

Historical rivals Iran and Turkey are on opposite sides in the Syrian conflict, but have been at pains to avert a direct confrontation. On Nov. 26, Iran's president, Hassan Rouhani, called for greater cooperation on Syria during a visit by Turkish Foreign Minister Mevlut Cavusoglu.

Still, the possibility that an Iranian drone, intentionally or unintentionally, dropped the fatal munitions on the Turkish forces “cannot be treated as a fantasy,” said a YPG commander contacted by Al-Monitor in northern Syria by phone. “The real fantasy,” he contended, however, “is that Turkey can overthrow Assad by military force.”