Did IS kill Turkish troops in Syria?

The Turkish government is remaining silent while some say the Islamic State — not the Syrian air force, as Ankara claims — was responsible for an attack on Turkish forces in northern Syria. 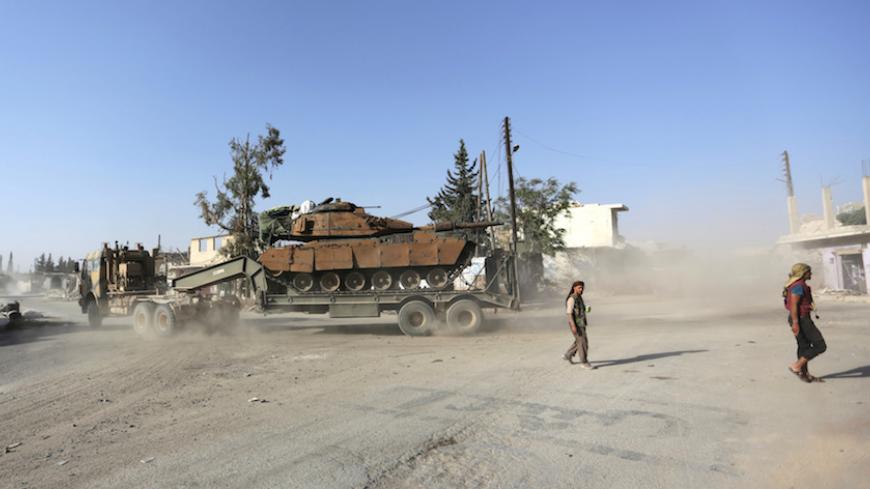 The veil of mystery has yet to be lifted over an alleged airstrike on Nov. 24 against Turkish-backed opposition rebels in northern Syria that left at least four Turkish soldiers dead and several others wounded. The incident, which under normal circumstances would have led to a torrent of indignant chest thumping by Turkish leaders, appears to have been quietly buried, with no mention of it in today’s headlines. Its absence prompts the question, Why?

The strike was said to have been carried out near the town of al-Bab. The Turkish General Staff issued a statement the day of the attack in which it said the Syrian air force had been responsible for the assault, but did not specify the area that had been bombed. If the Turkish claim is accurate, it would be the first time that Syrian regime forces have engaged in a hostile action against Turkey since its forces entered northern Syria in August to battle Islamic State militants and the Syrian Kurdish People’s Protection Units (YPG). The Syrian government has not commented either way.

Of note, Nov. 24 marked the first anniversary of the downing of a Russian jet by Turkey over the Syrian-Turkish border, prompting speculation that Moscow had engineered the affair as an act of revenge. Turkish Deputy Prime Minister Numan Kurtulmus, however, told a news conference today that Russian President Vladimir Putin had confirmed that the aircraft that carried out the attack did not belong to Russia. These assurances were likely relayed during two telephone calls that took place between Putin and Turkish President Recep Tayyip Erdogan Nov. 25 and 26.

The London-based Syrian Observatory for Human Rights, a respected monitoring group, has a different explanation for the attack. It said its information points to an IS suicide bombing. The Wall Street Journal reported that the jihadists had claimed responsibility for the Turkish deaths via one of IS' media arms.

Officials from the US-led coalition fighting IS seemed to back this version of events. “The [coalition’s] air operations has no indication of a flight,” a coalition official told Al-Monitor on strict condition of anonymity. A Turkish official who also requested anonymity insisted to Al-Monitor, however, that a Czech-manufactured aircraft had struck the Turkish forces.

Regardless of who was responsible for the attack, the fatalities highlight the growing risk Turkey faces as it becomes more deeply embroiled in the Syrian morass, with no clear strategy other than to halt the Syrian Kurds’ advance. The YPG is the US-led coalition’s top partner in the battle against IS in Syria, but the group’s close links to the Kurdistan Workers Party (PKK), which is fighting for Kurdish autonomy in Turkey’s predominately Kurdish southeast, has set off alarm bells in Ankara. Once the battle against IS ends, so the Turkish argument goes, the YPG will join forces with the PKK and turn its guns on Turkey.

For nearly a month now, Turkey and its proxies, a hodgepodge of Arab and Turkmen rebels, have been seeking to prevent the YPG from seizing al-Bab. With Russia's apparent blessings — which are vital because Russia controls the skies over much of northwestern Syria — Turkish-backed forces have come within striking distance of the town. So too, however, have the Kurdish and regime forces.

The Syrian regime is bent on keeping the rebels out of al-Bab because it would give them a strategic bridgehead to Aleppo. Meanwhile, Turkey is determined to keep the YPG out because it would allow them to link up Kurdish cantons to the east and west of the Euphrates River.

The coalition’s policy, one official summed up for Al-Monitor, is, that “no moves without coordination" in and around al-Bab. "Move without coordination, then the consequences are yours. That goes for Turkey and the [YPG led-] Syrian Democratic Forces.” A coalition spokesman recently confirmed that the coalition was not supporting Turkish moves to capture al-Bab.

As for Russia, its intentions regarding al-Bab remain unclear. As the official who spoke to Al-Monitor on strict condition of anonymity put it, “The Turks may need to learn that a deal with the Russians is not a deal with the regime.” They may also need to learn something Omer Taspinar, a senior non-resident fellow at the Brookings Institution, recently said: “The remains of martyred Turkish soldiers being returned from [Turkey’s mainly Kurdish] southeast is dramatically different from martyred Turkish soldiers being returned from Syria.”