Why does President Erdogan admire Belarus?

Erdogan prefers the self-styled “democracy” of Belarus and hails it against the failures and double standards of the West. 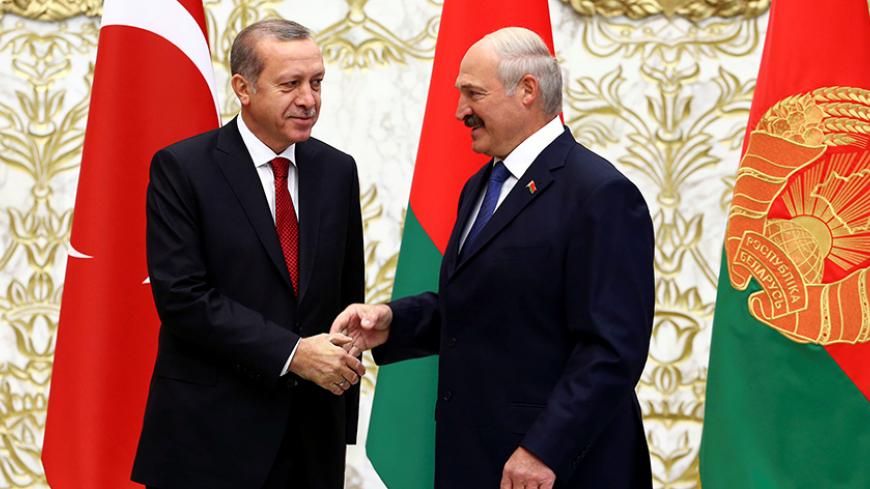 There was a time when Turkish President Recep Tayyip Erdogan was a frequent traveler to Western capitals, where he was welcomed as the leader of a rising and democratizing Turkey. Those days are long gone.

In the list of the Turkish president’s foreign visits in the past year, there were no Western destinations, with the exceptions of NATO or United Nations summits. Rather, the list includes countries like Qatar, Turkmenistan, Saudi Arabia, Chile, Peru, Uganda, Azerbaijan, Guinea, Nigeria, Ghana, Ivory Coast, Senegal, Ecuador, Kenya and Somalia. Since the attempted coup in July, five countries have been added to this list, which are also unmistakably non-Western: Russia, China, Pakistan, Uzbekistan and Belarus.

Could this mere map of Erdogan’s travels indicate that Turkey’s 2-century-old “Western orientation” is now being reoriented? Perhaps. But it is even more helpful to listen to Erdogan himself, who is often rightly proud of not mincing any words and making his views quite clear. It is helpful, for example, to look at the messages he gave after paying an official visit to Belarus on Nov 11.

For starters, Belarus, a republic of the former Soviet Union, is the only country fully placed in the European continent that is not often recognized as a democracy. Belarus itself, of course, defines itself as a democracy, but a democracy “significantly different from the Western concept.” The political system, according to an expert, is a “Soviet model of vertical public administration headed by the president.” There are no significant “NGOs [nongovernmental organizations], media, political parties, trade unions, social organizations,” and the ones that exist are “the state’s ideological pillars.” According to Freedom House, Belarus ranks as “not free,” as its political and civil liberties are on the level of China. It has been defined as the last Soviet Republic, and its leader, Alexander Lukashenko, has been banned from entering the United States and many European countries.

Erdogan traveled to Belarus to “increase mutual trade volume up to $1 billion” and also to attend the opening ceremony of a new mosque in Minsk, which was a step forward for religious freedom. Besides such pragmatic gains, however, the Turkish president also admired the political and legal system of Belarus, which he later defended in a press conference in Ankara. This European nation has the two important things he wants to bring to Turkey — the presidential system and the death penalty — Erdogan emphasized, and they both work nicely. He said:

“I went to Belarus most recently, a European country. The president of Belarus, which is governed by the presidential system, said, ‘My country works very well, crime rates are low, and the nation is happy with this situation.’ But Europe attacks Belarus a lot, asking why you have this [the death penalty]. … Europe also attacks the Belarus president as ‘dictator.’ Why? Because if there is tranquility somewhere, if there is peace, if its economy works well, then the West immediately begins attacking it.”

So Belarus not only had a good political and legal system, but also its president was unjustly “attacked” by the West as a dictator. Erdogan continued this line in another speech a week later in Istanbul, where he declared: “If they [Westerners] call somebody a dictator, that person is good in my eyes.”

This indicates that now the president of Turkey feels solidarity with the leaders of the world who are criticized by Western states, institutions and the media as “dictators.” That is probably also why he is now interested in joining the Shanghai Pact, a club of Asian dictatorships led by Russia and China, while preparing to abandon the European Union.

How did Erdogan — and, by extension, Turkey — come to this point? A part of the answer is Erdogan’s political vision. He is a great champion of “democracy,” but just like that of Belarus, this is a self-styled system quite unlike the liberal democracy common in the West. As Erdogan has reiterated perhaps a thousand times, democracy simply means elections, and the winner of the elections has the right to rule without any “tutelage,” which includes what Americans would call “checks and balances.” In Erdogan’s model, concepts such as free media, free speech, the right to peaceful assembly, limited government, decentralization of power, an independent judiciary or civil society either do not exist or, at best, are only given lip service. A conflict between this hierarchical “democracy” and Western liberal norms was inevitable.

Another part of the answer, however, is Western failures and double standards. Throughout their political journey, but especially in the past three years, Erdogan and his supporters have seen Western behaviors that genuinely convinced them about a major “Western hypocrisy,” adding to their embedded cultural biases. These include the resistance to welcome Turkey into the European Union even when Turkey was at its best and the leniency shown to Abdel Fattah al-Sisi, the dictator of Egypt, when he toppled and brutally oppressed a democratically elected Muslim Brotherhood government. The meek Western reaction to the coup attempt in July, rightly criticized by a few Western politicians such as former Swedish Foreign Minister Carl Bildt, was an additional blow. It seemed to confirm all of the Turkish conspiracy theories about a grand Western plot to overthrow Erdogan.

That is why, right in the aftermath of the failed coup, I was up in arms insisting, “The West must reach out to Turkey.” Otherwise, I wrote, “The result could be a major fallout between Turkey and the West.” A few months later, we seem closer to such a major fallout. Turkey seems, in other words, a bit closer to the Belarusian model.