Turkey is losing precious human capital, as many educated Turks are migrating to the West, scared off by ferocious crackdowns since the July coup attempt. 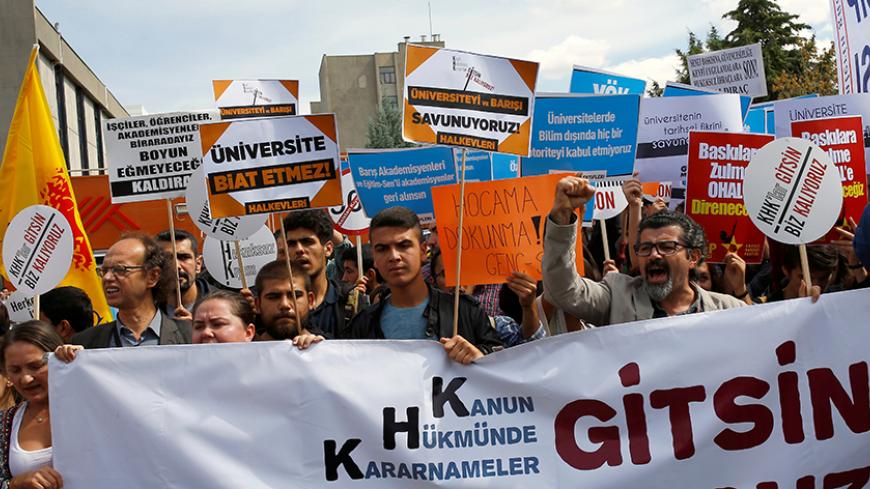 Demonstrators hold signs in front of the High Education Board during a protest against the suspension of academics from universities following a post-coup emergency decree, in Ankara, Sept. 22, 2016. - REUTERS/Umit Bektas

The aftermath of the July 15 coup attempt has sparked a migration flurry among educated Turks amid crackdowns on media freedoms and free speech, arbitrary restrictions on property and work rights, and growing talk of a looming economic crisis and even a civil war. Many of those leaving the country are academics, expelled overnight from universities via legislative decrees, journalists out of work and under the threat of imprisonment, and members of non-Muslim minorities who feel increasingly insecure.

Since the state of emergency was declared soon after the botched coup, 3,500 academics, one-fifth of them professors, have been expelled from universities across the country through two legislative decrees issued by the government. They include scores of scholars who had signed a peace declaration in January, urging Ankara to stop the military crackdown in the mainly Kurdish southeast and seek a negotiated settlement to the conflict. The signatories had already faced probes for spreading “terrorist propaganda,” and some were quick to seek safety abroad before things got even worse after the coup attempt.

One of them, currently employed by a university in the United States, told Al-Monitor on condition of anonymity, “I left Turkey because of threats and fear of imprisonment. I’m still afraid despite being so far away. I’m now worried for my colleagues in Turkey, and have been having sleepless nights since October. Primary and secondary education in Turkey was already finished, now higher education is finished as well.”

Another signatory of the peace declaration attempted to go abroad after being expelled in the wake of the putsch, but was not that lucky. Fearing unemployment and imprisonment, the academic said she sought help from the Scholars at Risk network and was offered a position at a German university. She was unable to go, however, as she was slapped with a travel ban.

International groups helping at-risk scholars have reported a record surge in applications from Turkey. In a report issued in October, Scholars at Risk warned of the far-reaching implications of Ankara’s crackdown on the academic community, saying, “The government's actions, beyond the harm done to the individuals targeted, have already harmed the reputation of Turkey’s higher education sector as a reliable partner for research projects, teaching and study exchanges, and international conferences and meetings. If not promptly reversed, these actions risk greater damage by isolating Turkish scholars, students and institutions from the international flow of ideas and talent, further undermining Turkey’s position in the global knowledge economy and its stature in the world more generally. Turkish officials must honor their obligations, including under the constitution, to protect institutional autonomy and academic freedom. They should reverse the actions taken and suspend further actions against Turkey's higher education institutions and personnel.”

Aysit Tansel, an economics professor at Ankara’s Middle East Technical University who has studied Turkey’s brain drain over the years, said, “Though I have not researched the issue academically in recent times, I hear that [Turkish academics] abroad are unwilling to return and those here want to go.” The expelled academics can hardly find teaching jobs in Turkey now, she said, adding, “They will have to either look for jobs outside academia or go abroad to seek jobs in or outside academia. They have to earn their living somehow. And if they go abroad, the damage will be on Turkey for losing well-educated, qualified people.”

Journalists are another professional group standing out in the migration flurry. More than 100 newspapers, radio stations and television channels have been closed down after the coup attempt, with scores of journalists facing judicial investigations.

Erol Onderoglu, the Turkey representative of Reporters Without Borders, described an unprecedented sense of insecurity gripping journalists of disparate stripes. “For the first time in 40 years, journalists and intellectuals of various, even opposite, leanings feel they are all the target of an oppressive government and emergency rule measures,” he told Al-Monitor. “So, [many] seem to have made up their minds or have already realized plans to live and work in exile, having lost hope of reclaiming their jobs or profession in Turkey.”

Turkey’s tiny non-Muslim minorities also seem to be on tenterhooks. According to the head of the Jewish community, Ishak Ibrahimzade, 250 Jews have left Turkey in the wake of the coup attempt. “In the Armenian community, the figure is not believed to have reached that level yet, but, sadly, migration remains high on the [community’s] agenda,” the Armenian-Turkish newspaper Agos wrote last month.

Brain drain has plagued Turkey since the 1960s. Academic studies indicate that the migration of qualified Turks was triggered by political crises and low wages, and continued throughout the years, though with a lesser intensity. Today, however, the brain drain is coming from people targeted by government policies, with many going abroad after failing to even find a job. This shows the brain drain is no longer an economic phenomenon but an increasingly politicized one. This, in turn, suggests that well-educated and qualified Turks will continue to look for better futures abroad, given the bleak prospects for the country.

In his remarks to Al-Monitor, the Turkish academic in the United States said he wished to return to Turkey “but not to the current one.” And the scholar who made an unsuccessful attempt to migrate said she did so reluctantly. In other words, migration is not a voluntary option. Thus, the brain drain is likely to stop if the government restores constitutional rights and freedoms and lifts the state of emergency with all its extraordinary practices. Turkey, which was already lagging behind the West both in media freedoms and overall academic standards, should give itself a chance to avoid falling further behind.