As Ankara has expanded its crackdown on opposition quarters and crossed some critical thresholds in what now seems a drive to lay the foundations of an autocratic regime, is the country at the ultimate breaking point with democracy? 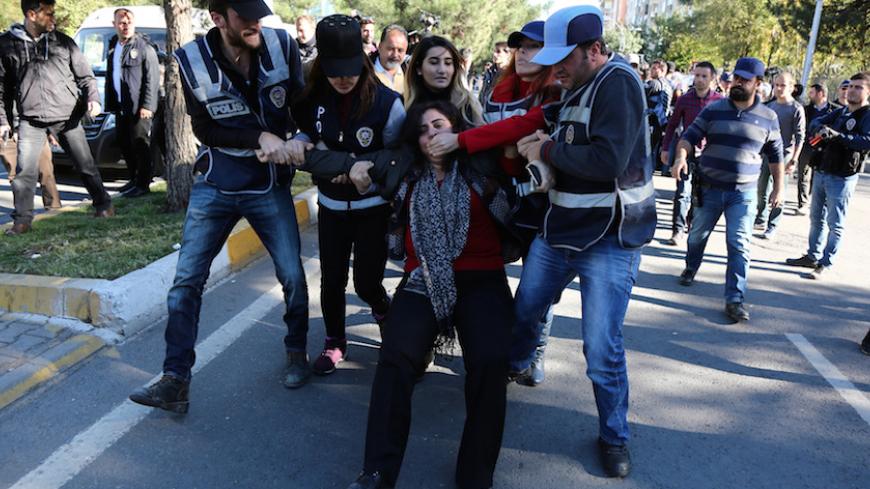 Watching the state of affairs in Turkey, one cannot help but wonder whether the country weathered a coup attempt in July or fell victim to a successful one. This alarming question is fueled by three patterns of action the government has followed after the botched coup, using extraordinary powers made possible by its declared state of emergency.

The first is a purge of the opposition. The judicial and administrative clampdown after the July 15 coup attempt has had as a target not only the putschists, but increasingly the media, opposition groups and the Kurdish movement as well. It's now as clear as day. Writers and intellectuals of various stripes have landed behind bars on arbitrary and trivial grounds. Twenty-four Kurdish mayors have been removed from office and replaced with government-appointed public servants.

Reporters Without Borders ranks Turkey 151st among 180 countries on its 2016 press freedom index, down from 98th place in 2005. The number of journalists behind bars reached 107 at the end of September, with 155 media outlets and publishing houses closed, according to the Independent Communication Network, a Turkish activist news site. About a third of those represent leftist, Kurdish and other oppositional groups, unrelated to the movement of Fethullah Gulen, the accused perpetrator of the coup attempt.

Second, the ruling Justice and Development Party (AKP) has used the purge of the putschists as an opportunity to establish full hegemony over the state. The more than 100,000 civil servants discharged after the coup attempt include both Gulenists and other AKP opponents, and they are being replaced with party loyalists. In the most recent example, a move reminiscent of past military coups, an Oct. 29 legislative decree abolished the right of academics at public universities to elect their rectors and transferred this right to the state, namely President Recep Tayyip Erdogan. As the AKP pushes forward in its quest to monopolize state personnel and institutions, the norms of the rule of law, including checks and balances, are inevitably being destroyed.

A similar process is underway with regard to hundreds of private companies seized as part of the Gulenist hunt. The state body charged with liquidating the companies has begun to transfer them to government-favored businesses.

The third pattern involves a growing arbitrariness in judicial proceedings. Criticism directed at the government and the president — both before and after the coup attempt — has come to be considered a criminal act aimed at discrediting and toppling the government. Individuals, groups and publications supportive of the Kurdish movement or critical of Ankara’s Kurdish policy face similar treatment. The most glaring example in this regard is perhaps the justifications that some courts have used to order arrests. Some journalists, for instance, have landed behind bars on grounds that their reports, columns or interviews included “subliminal messages” backing the putschists or constituted crimes committed “on behalf” of terrorist organizations "without membership" in those groups.

Making things even worse, the crackdown not only shows no sign of letting up but expands further by the day. Two highly symbolic developments in the past several days have perhaps marked a new chapter in Turkey’s authoritarian descent.

On Oct. 31, police raided the left-leaning Cumhuriyet, one of the best-rooted establishments of the Turkish press and a vocal government critic. The paper stands accused of colluding with what Ankara now calls the Fethullah Gulen Terrorist Organization (FETO) as well as the outlawed Kurdistan Workers Party (PKK), which is also on Ankara’s terror list. According to a statement by the prosecutor’s office, Cumhuriyet executives were “supportive of FETO and the PKK.” The paper’s coverage ahead of July 15 “legitimized” a military coup, and the suspects “committed crimes on behalf of the FETO and PKK terrorist organizations without being members of those organizations.” In other words, the paper’s criticism of the government was deemed an activity aimed at paving the way for a coup. The move signals that authoritarian boldness and audacity in gagging the opposition and suppressing criticism have now crossed a certain line.

The other critical development pertains to the Kurdish movement. First, Gultan Kisanak, the mayor of Turkey’s largest Kurdish-populated city Diyarbakir, was detained Oct. 25, along with her co-mayor, Firat Anli, on charges of membership in a terrorist organization. A public administrator was appointed to head the municipality as a trustee. An iconic figure in the Kurdish movement, Kisanak had been elected with 55% of the vote in 2014. Her arrest and replacement with a trustee signaled a serious drive to push legitimate representatives of the Kurdish movement out of the political realm, put Kurdish politics under full state control and further close the door to political dialogue to solve the Kurdish question. Soon after, on Nov. 4, police rounded up lawmakers of the Kurdish-dominated Peoples’ Democratic Party (HDP), the third-largest force in parliament, in midnight raids on homes and party offices. Those detained included the HDP's co-chairs, Selahattin Demirtas and Figen Yuksekdag, as well as Sirri Sureyya Onder, a central figure in settlement talks with Ankara until last year. The roundups signify the crossing of another threshold and the advent of a new phase, in which the legitimate and legal political realm is being criminalized.

So, where does this all put Turkey in terms of democracy? Whatever the reasons and pretexts, whatever the need to purge putschists from the state, one has to concede that Turkey’s bond with democracy today hangs by a feeble thread that grows thinner by the day. All those authoritarian moves have emerged more as the tools of building a new order and less as measures prompted by security needs, redolent of a drive laying the foundations of autocracy rather than an exceptional or transient violation of democratic norms.

Indeed, Turkey seems to be on the road to Erdogan’s ideal model of governance, which rests on three pillars — an obedient society, a docile press and unity of power. What comes next, transition to a presidential regime? Probably. The AKP’s alliance with the Nationalist Action Party, which has traditionally embraced authoritarian politics, is deepening by the day, and the constitutional amendment that would install the executive presidency Erdogan wants is no longer a distant prospect.

In sum, the purge of Gulenists from the state retains its vital importance for Turkish democracy, but the outlook emerging in the course of the purge speaks of an equally if not a more serious threat to democracy.