While President-elect Donald Trump took a strong stance against Islamists during his campaign, his openness to Turkey’s Justice and Development Party-led government shows that the coming administration’s approach to Islamists is still unknown. 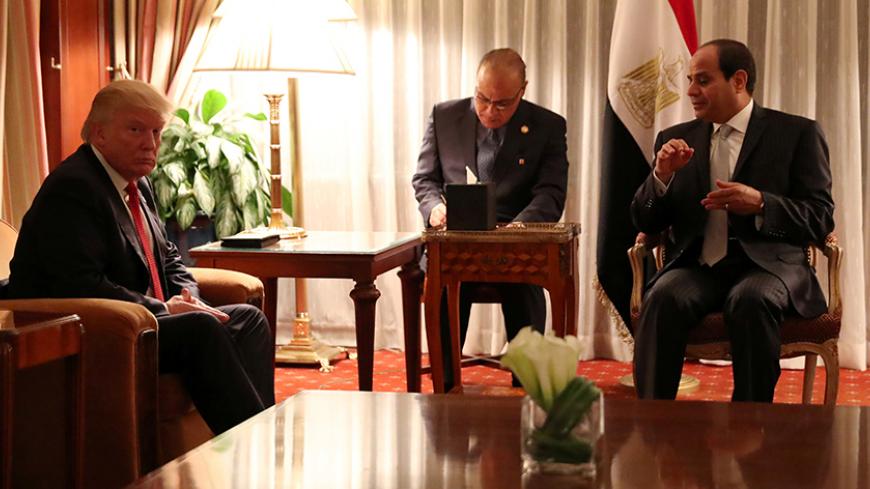 The upset that few expected has happened — Donald J. Trump, who ran on a platform of bigotry in a variety of fashions, has won the US presidential election. One of the first international leaders to call him with congratulations was Egyptian President Abdel Fattah al-Sisi. In policy circles in various Western capitals and in the region, the way in which a Trump presidency will deal with political Islamism, an issue both Trump and Sisi feel strongly about, is piquing curiosity.

Trump has made it clear that he regards the Obama administration as having been soft on Islamist extremism, even though it was under the Obama administration that al-Qaeda leader Osama bin Laden was eliminated. Trump’s main argument seems to be that Obama has been too cautious when describing Islamist extremism; Obama was careful not to claim Islamic authenticity for that extremism. Rather, as Obama's administration was keen to repeat, Islamist extremism was an aberration. This was a religiously heterodox approach to the religion. Such nuances are basic for much of the counterterrorism establishment and for subject-matter experts in academic circles and policy — but not, it seems, for large parts of the Trump camp.

The question is what Trump will now do on that file. Trump has been very clear that he regards Sisi to be a good model of a Muslim leader in the Arab world, despite serious criticisms by Democrats and Republicans of Sisi's record on fundamental human rights. Sisi’s administration is likely hoping that a Trump administration will label the Muslim Brotherhood, as Sisi did in Egypt, as a terrorist organization — and there is a great deal of support for that within large parts of the Trump camp.

If the synergies within a Trump administration do coalesce around the notion of outlawing the Muslim Brotherhood, they will have to contend with a number of obstacles within a cross-party counterterrorism establishment in Washington. Many of America’s allies in Europe also do not feel comfortable with the Muslim Brotherhood for a variety of reasons — ranging from Brotherhood sectarianism, to various Brotherhood organizations' providing platforms for incitement to violence and suspicions that various Brotherhood-linked groups have certain elements involved in violent activities. But the consensus in Europe has been that the bulk of the Brotherhood universe is a non-terrorist one — though there are continued discussions about this issue, particularly around the Palestinian Hamas and the Brotherhood's affiliate in Libya.

When it comes to political Islamism, there has been a tendency from different parts of the left and the right to generalize to the point of obfuscation and uselessness. On the one hand, there is the tendency to define the Brotherhood as basically al-Qaeda lite — a monolithic and ultimately radical extremist terrorist outfit. On the other hand, there is the tendency that largely presumes that the Brotherhood universe en masse is basically the Arab-Muslim version of the European Christian Democrat phenomenon — a claim that cannot be substantiated.

As Trump moves forward in his presidency, he is going to have to cope with several competing voices in this regard. Within the Republican camp, whether its members be "ultra-Trump" figures or traditional Republicans, there is little to no love for Islamists in general and the Muslim Brotherhood in particular. Indeed, much of the pro-Trump media were intent on smearing Hillary Clinton by claiming (falsely) that one of her aides was secretly a Muslim Brotherhood member, and claiming (again, falsely) that outgoing President Barack Obama had relied on Muslim Brotherhood "operatives" within his administration.

However, it is not just Republicans whom Trump is going to have to contend with as he maneuvers through various political arenas on this issue. Within the State Department, there is far more nuance than what the Republican mainstream would advocate on such issues — and while such voices can be overruled, the question is whether they will be effectively overruled or not. Internationally, there is also far more nuance from other Western governments on the file, even if such nuance is far more rare within the various governments of the region. It is ironic indeed that the Turkish administration, which is closely aligned with the Muslim Brotherhood in a number of arenas, was apparently one of the first to contact Trump to congratulate him — and to ask that Fethullah Gulen, whom President Recep Tayyip Erdogan has accused of masterminding a deadly and catastrophic coup attempt earlier this year, be repatriated to Turkey forthwith.

The reality is that the Brotherhood universe in particular, and political Islamism in general, is a varied and multifaceted one, with nuances and differences stretching across groups and geographies. It is important to understand all their different faces without reducing them to a simple characterization one way or another. Alas, it doesn’t seem, at least thus far, that a Trump presidency is likely to take that lesson on board.