As Egyptian President Abdel Fattah al-Sisi arrives in Washington to meet US President Donald Trump, a previously unpublished document reveals the behind-the-scenes efforts made by the Muslim Brotherhood to keep from being labeled a terrorist group in the United States. 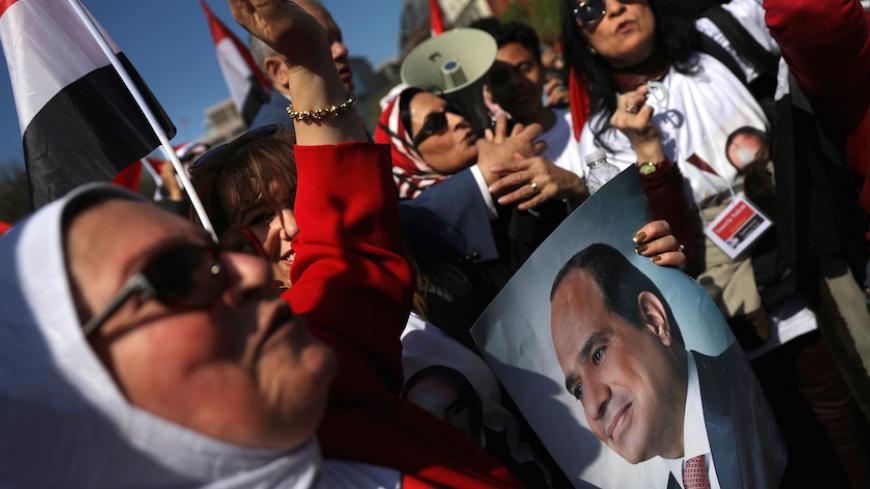 Supporters of Egypt's President Abdel Fattah al-Sisi gather outside the White House prior to his arrival for a meeting with US President Donald Trump in Washington, April 3, 2017. - REUTERS/Carlos Barria

Ever since it was announced in late March that Egyptian President Abdel Fattah al-Sisi would be coming to Washington April 3 to meet with President Donald Trump and hold a series of meetings with US decision-makers, there has been talk about a number of things on his agenda. Although Sisi and his accompanying delegation will likely discuss many issues during their visit to the US capital, one of the most critical and important issues for Cairo will be attempting to persuade the new administration to classify the Muslim Brotherhood as a terrorist organization. Attempts at getting the US Congress to slap this label on the group during former President Barack Obama’s term were not successful, after bills proposed in both the House and Senate in early 2016 failed to garner enough support. The Senate bill was proposed by former presidential candidate Ted Cruz, a Republican from Texas.

Statements from the parliamentary and political delegation accompanying Sisi, whose members arrived in Washington on March 30-31, show that they will be focusing on communicating with congressmen who voted in favor of the aforementioned bills, along with other legislators, in an effort to get congressional support for labeling the Brotherhood a terrorist group.

During this visit, concerns about the Muslim Brotherhood will be a top priority, unlike the past. In the era of former Presidents George W. Bush and Hosni Mubarak, the group was a secondary concern to Cairo when it came to bilateral ties with the United States, and under Obama no real progress was made in this regard.

The Muslim Brotherhood, it turns out, is not standing idly by. The group has been making efforts to confront these attempts since February 2016, when calls for labeling the group took a serious turn domestically in the United States.

The Muslim Brotherhood in Egypt, however, has responded in light of its conflict with the Egyptian regime, particularly since it is the primary target of Cairo’s efforts to have the group labeled a terrorist organization.

Al-Monitor reviewed the means used by the Muslim Brotherhood to confront the regime’s lobbying in Washington, which involved contacting decision-makers in the US Congress, State Department and White House, and has obtained an official document issued by the group laying out its response to the terrorism label. An active Brotherhood member in Egypt told Al-Monitor that this document has been sent to people in the US administration and government decision-making circles after Trump took office, specifically in recent weeks, in preparation for Sisi’s visit.

The Brotherhood member, who spoke on condition of anonymity out of fear for his personal safety, said the document was prepared in March 2016 as a primary means of defending against accusations directed at the group. He said that the document is the official response used by the Muslim Brotherhood, and “the most relied-upon [means] among the leadership for officially defending the group.” He said, “It’s difficult for the Brotherhood leadership to take action at the individual level within the United States to defend the group in Egypt, especially after the arrival of Trump.”

The source, who is affiliated with the so-called historical leadership represented by Mahmoud Hussein and Mahmoud Ezzat, said that this document was also sent to some official agencies in London in response to an investigation opened in the United Kingdom into the Brotherhood’s position on the issue of violence and terrorism. According to the source, the document played a role in freezing the investigation and preventing the group from being labeled as a terrorist organization in the United Kingdom. He added that a law firm and academic studies center helped prepare the text, yet declined to name them for security reasons.

Below, Al-Monitor examines the most important points laid out in the 69-page document. It includes legal, historical and political commentary, in addition to the text of the bill proposed in Congress last year that promoted the document’s drafting.

In the first part of the document, titled “Responding to the Draft Law of the US Congress to Include the Brotherhood on the List of Terrorist Organizations,” the group refutes what is stated in the bill from its point of view, specifically the reasons the bill relied upon for listing the group. The first part of the document is divided into five sections: first, the listing of the group as a terrorist organization in Syria, Egypt, Saudi Arabia, the United Arab Emirates (UAE) and Russia; second, the establishment of the Muslim Brotherhood in Egypt in 1928 by Hassan al-Banna and its growth throughout the world; third, the group’s religious principles, especially those that talk about “dying in the way of Allah” (which those proposing the US bill considered to be evidence the group forced religion through “jihad”); fourth, responding to the bill’s claim that because al-Qaeda leaders follow the Brotherhood this means the group targets the United States; and fifth, accusations that the Brotherhood committed violent crimes against the Egyptian government in 2015.

In the first section, the document relies on historical narratives to address the reasons the Brotherhood was labeled a terror group in each of the countries listed. For example, in Russia the issue was attributed to the Brotherhood’s support for Muslims of Bosnia and Herzegovina during the Serbian war in the mid-1990s. In the UAE and Saudi Arabia, it argues the group was targeted due to the Arab Spring revolts and fears that the revolution would be exported there. For Egypt and Syria, it refers to the former coups in those countries and the Brotherhood’s opposition to the regimes that emerged from the coups.

In the second section, the document stresses the legality of the establishment of the Muslim Brotherhood at the time, referring to the establishment of other “Islamic and Christian associations.” It notes that the group is not the only one with a religious background formed in the 1920s. While it claims the establishment of branches outside Egypt has been legal, it does not go into details in this regard.

The third section, focusing on the concept of jihad, is the longest section of the document’s first part. The main idea of this section is that the Brotherhood’s concept of jihad “does not depart from the conventional concept of war and the right of legitimate defense based on international humanitarian law and the United Nations Charter.” It notes that Banna formulated the concept of “constitutional jihad,” i.e., confronting autocratic rulers with peaceful and legal methods, whereby elections are the path to change.

It is worth noting in this regard that the document says there are “groups” comprising the Brotherhood, therefore it is not a standalone organization.

“It is not a single organization, but rather many organizations and groups in each state. They are linked by an intellectual and cultural framework, not a regulatory one. Each group is independent, depending on the circumstances of each country,” the document notes. It adds that Brotherhood members are estimated to number “tens of millions in sixty countries, including the United States.” Cooperation with the “mother” group in Egypt happens “in a general cultural-political framework that respects the independence of each state.” The document bases its defense on the idea that the Brotherhood seeks a democratic environment, and that is the reason for fighting despotic Arab regimes.

As for its relations with al-Qaeda, the document cites attacks made by al-Qaeda leaders such as Ayman al-Zawahri against the Brotherhood, also writing that the Islamic State has considered it an “infidel” group. The document claims these omissions are a “deliberate concealment of facts” by the Senate bill’s drafters.

In the fifth and final section of the first part of the document, the Brotherhood denies that it committed the violence attributed it, claiming instead that the current Egyptian regime has committed crimes against the group and its members. It recounts a number of incidents, foremost what took place at Rabia al-Adawiya Square and Fatah Mosque in August 2013. It concludes with the group’s vision on elections, the constitution and the law. The document clearly refers to the so-called Neda’a’ Kenana Statement that emerged in the summer of 2015 and was a source of great controversy and concern among Western circles about the future of the group. The Brotherhood defends this statement, saying that it spoke of the right to legitimate defense and was reviewed by religious scholars in nearly 20 countries — it also says it was not aimed at calling for violence.

The second part of the document, titled “Peacefulness in the thought and behavior of the Muslim Brotherhood,” addresses similar issues to the first part, but goes deeper into the group’s history to explain how the Brotherhood has dealt with other religious communities. It clarifies the group’s position on the Egyptian regime in the mid-20th century, quoting the speeches of Brotherhood founder Banna, and addresses its position on the Sept. 11 attacks. The document then responds to what it calls “individual incidents” in its history, such as the killing of Mahmoud El Nokrashy Pasha by young Brotherhood members in the 1940s.

This part of the document addresses what happened in Egypt since the January 25 Revolution until last year, discussing “arrests, forced disappearances and torture,” in addition to other matters the group considers violations against the Egyptian opposition.

The document claims that Congress or the US government supporting the Egyptian regime would threaten US national security, saying that “authoritarian regimes manufacture terrorism” that threatens America.

The Muslim Brotherhood concludes the document by saying it remains “the strongest [group] on the Egyptian political scene, and is still capable of engaging in any democratic political competition despite all the deadly blows it receives.” The group will soon return to the scene, it notes.

This document reveals the large role played by the historical Brotherhood leaders and shows that the group, as represented by this stream, is ready to return to work in the Egyptian political arena once it has the opportunity to do so. It also shows the Brotherhood is still counting on major powers to support this return.

One major question will be raised through Sisi’s visit: Which side will be able to best convince the US administration, decision-makers and politicians? And can Egypt succeed in having the Brotherhood in Egypt classified as a terror group if it is not able to get the worldwide group as a whole labeled as such? The coming days might reveal the answers, as the conflict between the two sides continues in the political corridors of Washington.

Editor’s note: Quotations from the Brotherhood document have been translated by Al-Monitor from the original Arabic version.