The president-elect and his advisers take a dim view of the Muslim Brotherhood and its cousins, but could shutting them out end up hurting America the most? 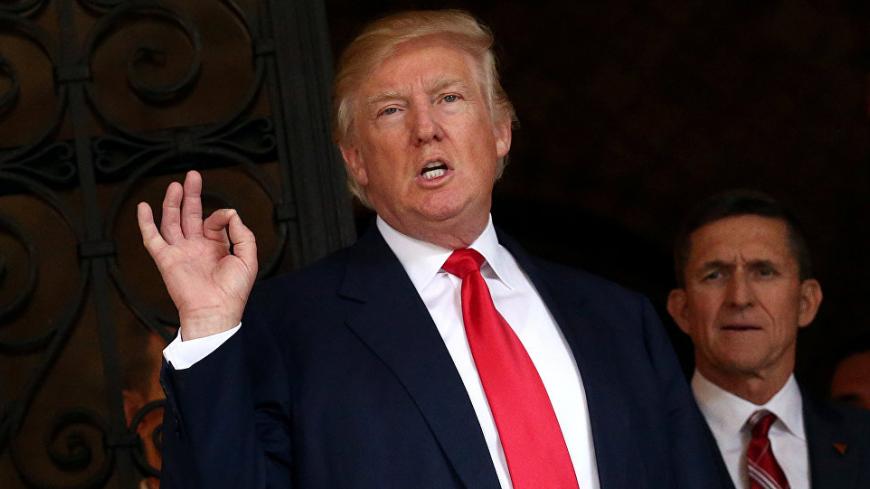 US President-elect Donald Trump talks to members of the media as retired US Army Lt. Gen. Michael Flynn stands next to him at Mar-a-Lago estate in Palm Beach, Florida, Dec. 21, 2016. - REUTERS/Carlos Barria

From Washington to London to Istanbul, the broad spectrum of so-called political Islamists are bracing for what many fear is becoming a witch hunt that threatens to undo the few gains they were able to secure post-Arab Spring. For the past several weeks, they’ve been debating how best to convey their beliefs to an incoming US administration that’s skeptical if not outright hostile of any effort to shake up the Middle East’s authoritarian establishment.

At its heart, their argument is that by bowing to domestic Islamophobia and foreign autocrats, the United States risks alienating millions of mostly young people who still believe that peaceful transitions of power are both possible and desirable. That in turn could delay Islamists’ democratic evolution, undermine US allies that have worked to incorporate them into the political structure, prolong the region’s conflicts and ultimately fuel more terrorism.

“What needs to be understood is that the most important element of that broad spectrum of political Islam in my view is the pro-democracy element. That is the element that was part and parcel of the revolution in Tunisia, and Egypt, and Libya, and Syria. It’s the element that is mobilizing and motivating voters,” said Anas Altikriti, the chairman of the Muslim Association of Britain, which is ideologically close to the Muslim Brotherhood. “You’re not talking about fringe parties. You’re talking about real major political players who have, regardless of whether you agree or not with their ideology … rejected violence and espoused democracy.”

Getting that message through to the new administration and the incoming Republican-led Congress could prove a tall order.

Trump’s choice to be national security adviser, Lt. Gen. Michael Flynn, has called Islam a “political ideology” that “hides behind this notion of it being a religion.” House Homeland Security Committee Chairman Michael McCaul, R-Texas, has made it clear he’s gunning for legislation that would push the State Department to label the Muslim Brotherhood a terrorist organization.

Even Trump’s generally nuanced choice for secretary of defense, Gen. James Mattis, has spoken ominously about the movement’s goals.

“Is political Islam in the best interest of the United States?” Mattis asked at a forum at the conservative Heritage Foundation in 2015. "I suggest the answer is no, but we need to have the discussion. If we won't even ask the question, how do we even recognize our side in this fight?"

Political Islam’s defenders respond that there’s now a well-documented record of their time in power for anyone curious enough to look. From Morocco to Tunisia to Jordan and Kuwait, Islamic values-based political parties have openly served — and even led — in parliament and government since the 2011 revolutions. 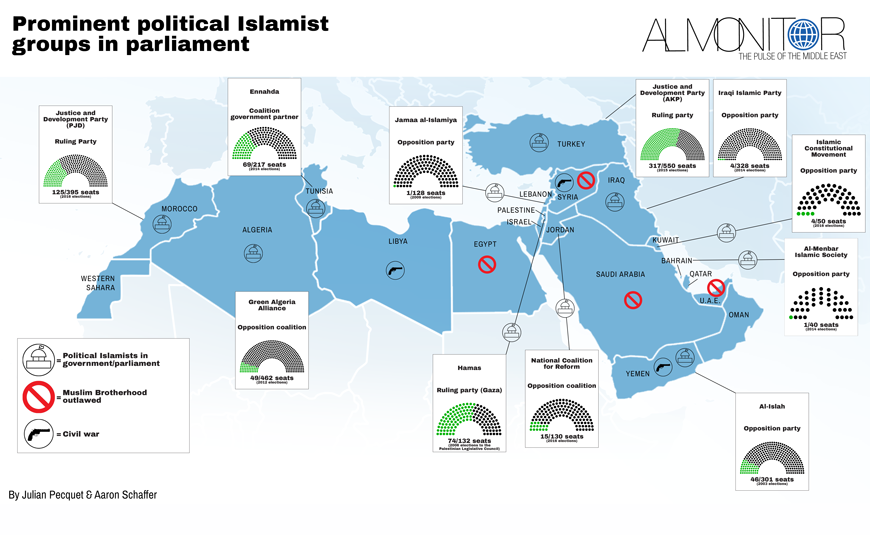 (Click here to view a PDF version of this chart)

​Alarmists “are doing a disservice to the American public, and even to American interests in the region, by lumping all these groups in one category,” said Mongi Dhaouadi, a senior program officer at the Center for the Study of Islam and Democracy, a think tank that advocates for better US relations with political Islam. “Many of them now have been in government. So look at what they have done — what they have achieved, or failed to achieve, and base your decision on that. If there is evidence that these groups have engaged in any kind of terrorist activities or terrorist language or anything, just say so, but designate that group, don't cast a wide net on everybody else.”

If anything, Altikriti argues, that experience governing has often tempered political Islamists’ goals and expectations. While the Egyptian Muslim Brotherhood’s incompetence and authoritarian tendencies during its short stint in power under President Mohammed Morsi offers a cautionary tale, that group operated in the shadows for decades after being banned for the first time in 1948.

“It’s a good thing that we draw people out from underground and allow them a chance — if they win elections — to actually take their turn,” Altikriti said. “And we will find that their narrative, as well as their practice, will be tempered, will be moderated by the brutal truth of [the] reality [of governing].”

Dhaouadi pointed to last year’s British parliamentary inquiry into political Islam as a model that the United States could emulate in its deliberations.

After hearing testimony from a number of Islamist leaders and experts, the House of Commons opined in a 60-page report that Britain should judge Islamist parties — as well as all other foreign political actors — based on their commitment to democracy, human rights and nonviolence. It concluded that the Muslim Brotherhood should not be designated a terrorist group.

“Political Islamists self-identifying as democrats have embraced elections as a mechanism for contesting and winning power,” the report concluded. “They should be allowed to freely participate in democratic processes, and the [British government] should use the ability of political Islamists to take part as one of the key criteria for defining free elections in the MENA [Middle East and North Africa] region.”

That report in turn sparked a 10-page admonishment from the Egyptian parliament, which has been effectively neutered by President Abdel Fattah al-Sisi since he deposed Morsi in 2013.

“We are surprised by the new generation of European radical liberals and progressives who defend political Islam and thereby give cover for Islamist movements that claim victimhood to spread across Europe and create a fertile ground for Islamist radicals there," Ahmed Said, the head of the Egyptian Foreign Affairs Committee, told reporters in November. "These groups want to Islamize the entire world, and they only differ on when and how these objectives should be implemented."

In sharp contrast with the UK model, the US House Judiciary Committee hardly debated the issue at all before voting last year to recommend that the State Department designate the Muslim Brotherhood a terror group. In lieu of hearings on the matter, the bill from Rep. Mario Diaz-Balart, R-Fla., cited the group’s banishment in Syria, Russia, Egypt, Saudi Arabia, the United Arab Emirates and Bahrain as grounds for a US ban.

Tacit US endorsement of such authoritarian regimes’ justification for banning the movement is exactly what worries even some political activists who have nothing to do with political Islam. Bassam Barabandi, a former Syrian diplomat who’s now a political adviser to the Syrian opposition's High Negotiations Committee, told Al-Monitor that Syrian President Bashar al-Assad is all but certain to use such a designation for his own ends.

“It will play into the narrative of the regime, which is that people who are against me are Islamists, and Islamism is terrorism by US decision,” Barabandi said. “If they go that far here, the Assad regime will use it.”

Barabandi argued that for now many rebels and civilians are siding with whatever group can offer them money and protection, with ideological consistency an afterthought at best. He said the United States should wait for the situation to stabilize before making decisions that could impact the lives of people who have never had a chance to decide for themselves what their values and beliefs really are.

“The rhetoric here is pushing me to a place where I don’t want to be,” Barabandi said. “The Arab Spring was an opportunity to move one step forward in identifying who we are. And it was killed. Purposefully, it was killed.”

Indiscriminate labeling of Islamist groups as terror threats could also make it harder to resolve conflicts in Libya and Syria by shutting out key actors, argued Dhaouadi.

“Some of these groups that … align themselves with the Brotherhood are part of the landscape. You can't ignore them. They will be — and they have to be — part of any political settlement to move forward,” he said. “So if you by law designate them as a terrorist organization, then you can't deal with them, they can't be part of any political solution, or at least any process that the United States is involved in.”

Ultimately, Altikriti argued, it’s the United States that stands to lose the most from a policy of nonengagement. Political Islamists are used to being shunned, he said, even under the Barack Obama administration, and will continue to exist with or without US support.

“We disengage to our peril,” he said. “How many people are we not listening to right now who in the foreseeable future will become statesmen and we will have to invite and listen to because they’re part of the political construct?”

If there’s a silver lining, it’s that renewed scrutiny on political Islamic groups may yet force Washington to take a clear-eyed look at what various political Islamist groups really aspire to — if the US political system is up to the task.

Juan Zarate, a former deputy national security adviser to President George W. Bush and a frequent witness on Capitol Hill, told Al-Monitor that Bush was right to focus on the ideological undercurrents that fuel Islamist terrorism. The Obama administration, he said, has de-emphasized that line of inquiry in favor of a more tactical focus on al-Qaeda and related groups.

“I think it’s important that we actually think long and hard about how we define the problem and who’s onside and who’s not,” he told Al-Monitor. “This is a moment for people to be very clear about how they’re countering this ideology and what it means to not just terrorism but also international norms and principles.”

“I think actions speak louder than words, and I think any group should be judged by how it’s operating and with whom it coordinates and how it acts,” Zarate said. “To the extent that in Tunisia, Morocco, Kuwait, these are groups that are actually contributing to the way that the government is functioning, they’re legitimating the [legal] order, they’re not trying to undermine it, that should be taken into consideration … when we’re thinking about our policy with respect to each country and then with respect to the group at large.”