The Ministry of Education and Higher Education in the Gaza Strip warned companies, offices, libraries and others against selling ready-made academic research papers and projects for undergraduate and graduate students in a recent statement. 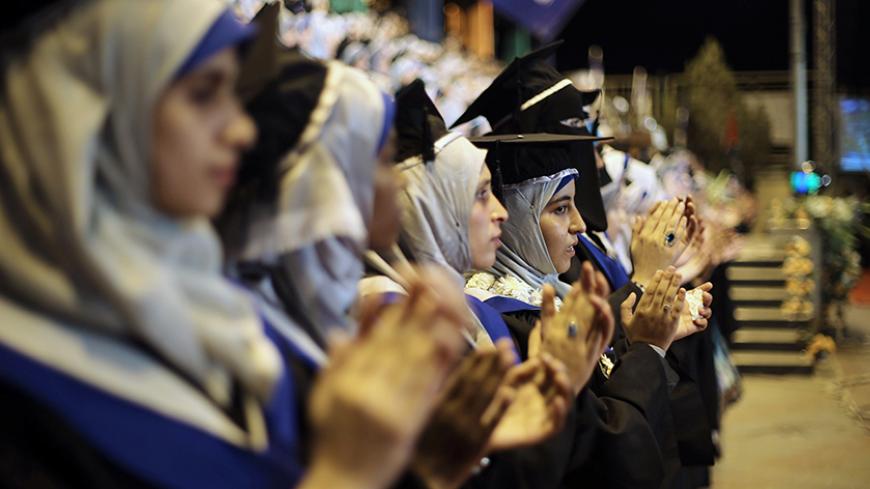 GAZA CITY, Gaza Strip — In a statement Oct. 12, the Ministry of Education and Higher Education in the Gaza Strip warned companies, offices, libraries and others against selling ready-made academic research papers and projects to undergraduate and graduate students. The statement, which did not include any accurate relevant figures or statistics, came in light of the rampant phenomenon of buying ready-made academic research papers and projects among students in Gaza.

In Palestine, 15 universities are accredited by the Ministry of Education and Higher Education, five of which are in Gaza, and offer dozens of undergraduate and graduate degrees in a wide variety of majors.

After they register for the graduation research project course, students are offered ready-made research papers by the staff of bookshops and libraries that operate in the vicinity of the universities across the Gaza Strip.

A sale and marketing employee in one of the bookshops spoke to Al-Monitor on condition of anonymity, saying, “It is no surprise that a library located in the vicinity of a university campus is selling ready-made research papers and projects for 600-1,000 shekels [$200-$300] for a research paper and 3,000-3,500 shekels [$800-$900] for a master’s thesis.”

He added, “Most of these ready-made graduation projects aimed at undergraduate students are downloaded from the internet or are updated graduation projects of former students and edited to suit the research subject required. The master’s theses on the other hand are produced in collaboration with specialized researchers in return for a commission to be set in advance for each project.”

A female student told Al-Monitor on condition of anonymity, fearing legal prosecution, that she bought her graduation project for 500 shekels (around $130) and was able to obtain a bachelor’s degree in economy and administration. She said she sought to buy the paper because she lacks academic writing skills and ways to find sources and references.

She added that the graduation project is a mere routine administrative procedure, which is accorded minimal importance by professors during discussions. She concluded that there was no need to spend hours working on such a project after attending a number of discussions on graduation projects submitted by students who graduated before her from the same department.

The purchase of ready-made university research papers and projects has become common in Gaza, to the extent that it is openly advertised with announcements and ads in the windows of libraries and bookshops near university campuses. In addition, local newspapers have been reporting on this widespread phenomenon in the Gaza Strip.

There are two main reasons for the spread of the phenomenon of trading university research papers and projects. The first is the lack of knowledge by many students of the academic research methodologies as well as the lack of seriousness by the students and universities in regard to these papers and projects. The second reason is the increasing number of unemployed graduates in Gaza, with many deciding to sell their research papers and graduation projects to make some money.

A 2014 graduate from the information technology department at the Islamic University in Gaza, who has been unemployed since his graduation, told Al-Monitor on condition of anonymity that he was forced to write programming and design graduation projects for IT students from different universities, which he sells for up to $500 per project.

He said this is his only source of livelihood to cover his personal and family's expenses in light of the difficult economic situation plaguing the Gaza Strip.

The current applicable legislation in Palestine was issued in 1924 by the British Mandate government and has yet to be updated or amended by the parliament. This law is not deemed efficient to curb the sale of research papers and graduation projects since this law does not explicitly tackle this relatively recent phenomenon.

Given the extent of this problem, institutions and individuals involved in the sale of academic research papers and projects could soon be legally prosecuted for having committed fraud and deception.