US President Barack Obama wants to leave a practical legacy to his successor in the form of a Security Council resolution rejecting West Bank settlements, yet this might have to wait if Hilary Clinton wins the presidential elections. 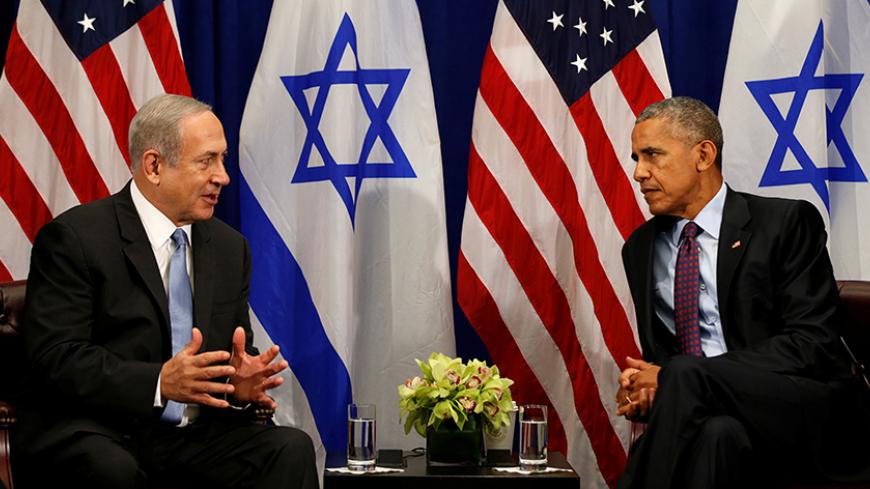 Reportedly, Israeli Prime Minister Benjamin Netanyahu told West Bank Amona settlers (whom the Israeli High Court of Justice decided need to relocate) that US President Barack Obama still constitutes “an existential danger’’ to the Israeli settlements. The settlers leaked this information to the Israeli media. While overstating his case, as usual, Netanyahu was referring to a possible UN Security Council resolution declaring the settlements illegal and asking Israel to avoid all settlement expansion. Sometime between Nov. 9 and Jan. 20, the US administration might agree for such a proposal to be voted on.

This concern is not just the usual Netanyahu paranoia, but is based on the assessment of the Israeli ambassador to Washington. A senior Israeli Ministry of Foreign Affairs official told Al-Monitor on condition of anonymity that Israel fears that Obama will want to leave a practical legacy to his successor in the form of a Security Council resolution rejecting the settlements in the West Bank. He said, “Obama is obsessed by an objection to the settlements and by his criticism of Netanyahu."

The above was confirmed in essence to Al-Monitor by a senior US diplomat in Tel Aviv. Obama and Secretary of State John Kerry consider the Israeli settlement policy the main reason for the failure of Kerry’s 2014-15 mission and the main obstacle to a two-state solution. Washington believes that if the Israeli settlement policies are allowed to continue undisturbed until the next administration has a Middle East team and clear Middle East policy in place, the situation on the ground could become irreversible in terms of denying a viable Palestinian state.

This is the reason White House spokesman Josh Earnest has used very strong language lately when criticizing the Netanyahu government on its settlement policy. On Oct. 6, Earnest accused the Israeli government of betraying the administration, saying, “We did receive public assurances from the Israeli government that contradict the announcement [of constructing 300 housing units on land that is] far closer to Jordan than it is to Israel.” Earnest warned that Israel’s decision to relocate — considered by settlers as a necessary compensation for dismantling Amona — jeopardizes the already distant prospect of Middle East peace as well as Israel’s own security.

On Oct. 21, the issue of a Security Council resolution in the months to come was raised at the European Council of Foreign Ministers in Brussels.

A senior official close to Federica Mogherini, the EU high representative for foreign affairs and security policy, told Al-Monitor that the European Union is conveying to Kerry the importance and urgency of a concrete policy move against Israeli settlement expansion. Such a resolution would, according to the EU official, include strong wording on the settlements as an obstacle to a two-state solution (taken from the July 2016 Quartet report), as well as a demand that Israel stop all settlement expansion and a call to the parties to immediately renew negotiations on a two-state solution based on previous Security Council resolutions. France and Egypt would likely advance the resolution before the end of 2016.

The Palestinian leadership is welcoming this possible development even though it does not satisfy their political claims. A senior PLO official also told Al-Monitor that Ramallah is in close contact with the French and Egyptian foreign ministers on this issue. The Palestinians are unhappy with the lack of terms of reference for Palestinian statehood and suspect that the US administration might veto the Security Council proposal.

It is now up to the White House to decide on the issue after the elections. There is no doubt that Obama will have to discretely consult with Hillary Clinton, the likely winner of the upcoming elections. A veteran US diplomat who was part of Secretary Clinton’s foreign policy team told Al-Monitor that, while this issue is not being discussed at the moment with the Democratic presidential candidate, it is unlikely that Clinton would want to see such a US policy move before taking office — as it would taint a Democratic administration with anti-Israeli colors.

Therefore, it is more likely that Obama will ultimately opt for a policy speech expressing his outrage against the settlements and the necessity of a two-state solution based on the 1967 lines. A Security Council resolution — in the time frame between the elections and the next president taking office — is therefore more possible in case Donald Trump becomes the next president.

A Security Council resolution on a settlement freeze is important and essential, given the Netanyahu settlement expansion policies and the vacuum created by the US election and transition period. But as important as it might be, this likely has to wait for quite some time.