Is Israel's reputation in decline?

The United States and the European Union once regarded Israel's occupation as a temporary evil, but now its settlement expansion is perceived as no less detrimental to the peace process than Palestinian terror. 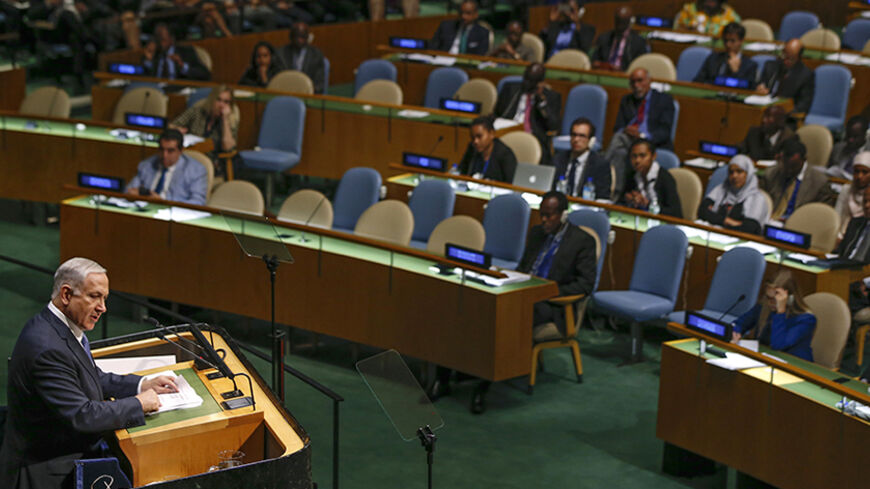 A senior Israeli Foreign Ministry source shared with Al-Monitor on condition of anonymity his concern for Israel's growing international isolation: "I've never experienced such an avalanche of criticism on Israel's policies as in the period since the war."

Indeed, Israel is under diplomatic fire. The biggest bombshell came from the White House immediately after Prime Minister Benjamin Netanyahu's last visit to the US capital, over the Jerusalem settlement expansion in the Givat Hamatos neighborhood.

The conflict worsened with the White House's reaction to Netanyahu's blunt accusation that the United States is not living up to its values: "It’s American values that have led us to fund an Iron Dome system," said White House spokesman Josh Earnest — verbally slapping the prime minister in the face. This is probably the lowest point in the relationship between the Oval Office and Israel since former US Secretary of State Henry Kissinger’s 1975 policy reassessment.

The European position is even worse, as far as Israel is concerned. Sweden has already announced that it will recognize the Palestinian state.

This announcement was followed by the British Parliament's vote to this effect, and other European Union members will probably follow suit, either through their governments or by parliamentary vote. All this criticism is a symptom of a more profound change in attitude toward Israel, with possibly severe policy repercussions in the future.

The Israel-friendly international community (namely the United States and the EU) is frustrated with Israel's leadership and policies. This is no longer a tactical dispute over the peace process. Western governments have changed their views on what Israel is or has become.

For years, Israel was an object of admiration by the West for its dramatic rebirth, its military and technological ingenuity, its democracy despite war and its humanity after the Holocaust. All this is gradually being replaced by a perception of Israel as a colonial power with racist tendencies, theocratic practices and a good deal of paranoia and xenophobia. Israel is also no longer the underdog of the conflict; it is simply too strong.

Most importantly, the occupation of the Palestinians, once viewed as a temporary evil, is now seen as second nature to Israel. Its settlement expansion is perceived in most European capitals as no less detrimental to the peace process than Palestinian terror.

While the international community is fighting the Islamic State (IS), both the United States and the EU expect Israel to appeal to Arab public opinion through moderate policies on the Palestinian issue. Dogmatic policies on the Palestinian issue weaken the anti-IS alliance, in their view. A senior source at the French Foreign Ministry told Al-Monitor privately that inside the ministry, there are voices in favor of tougher measures against Israel, such as boycotting settlement products or even sanctioning other Israeli companies that do business beyond the Green Line.

Netanyahu and Foreign Minister Avigdor Liberman tend to brush off the dangers facing Israel in its isolation and accuse the world of hypocrisy and double standards. Their response can be heard in the sphere of "hasbara" — Israel's targeted public diplomacy — not through policy changes. They count on Washington to bail Israel out again and again. If not the Barack Obama administration, there is always the Republicans and the Amerian Israel Public Action Committee. Their approach stems from a belief under which any criticism is anti-Semitic.

This situation is dangerous for a country so dependent on its place in the family of nations. Israel is strategically dependent on the United States and on its trade with the EU. As a small country in a globalized world, you are either in or out, either South Korea or North Korea. The gates to a slippery slope toward boycott and sanctions have opened with the collapse of the peace process and the building of about 14,000 housing units in the West Bank during the talks with US Secretary of State John Kerry (August 2013-April 2014). There is talk in Europe about a "new Israel," the Israel of Economy and Trade Minister Naftali Bennett. Never since 1967 has Israel been so isolated due to its own policies.

Sources in the US peace negotiations team who asked not to be named told Al-Monitor that Kerry is extremely worried about the way Israel is perceived around the world. The United States does not want to take on its partners in the fight against IS and in the negotiations with Iran for the sake of preventing UN resolutions or punitive measures regarding Israel's "settlement first" policy.

These sources express hope that after US midterm elections Nov. 4, the Israeli government will accept what Kerry proposed to Netanyahu during his last Washington visit: to restart the peace negotiations based on the 1967 lines with mutual land swaps and security measures for Israel. That would, at the very least, delay unilateral Palestinian activity for statehood at the UN Security Council and General Assembly. On the other hand, in the inner sanctum of Israel's decision-making process, there is a quiet hope that after Nov. 4, Obama will become a lame duck president with the Republicans controlling both houses of Congress.

As long as Israel cannot utter "1967," its acceleration toward becoming an apartheid South Africa-like state will continue. This may become the central theme of Israel's next election campaign. Israelis who care little today about a two-state solution do care about their place among the nations and their quality of life.