The constant attacks by the Israeli government against the US administration are slowly weakening the US Jewish community's traditional support for Israel, especially among the younger generation. 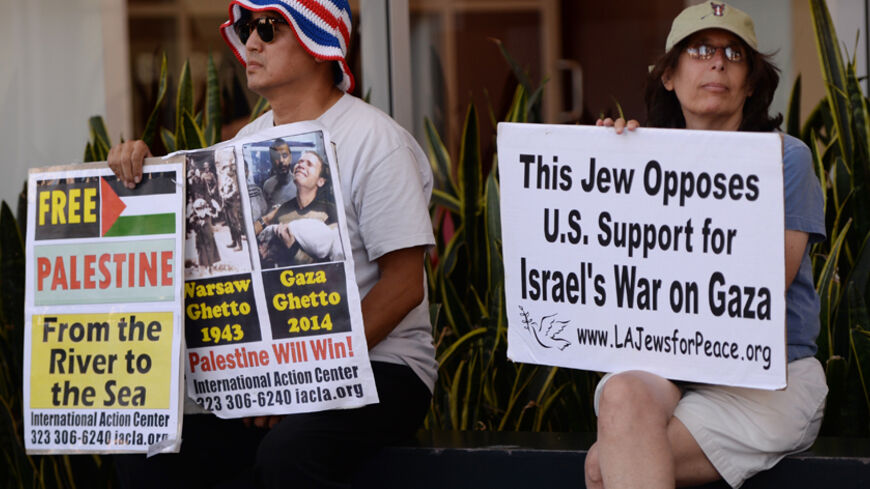 A Jewish peace activist (R) watches a rally by Palestinian Americans and their supporters during a protest march against the conflict in the Gaza Strip in Los Angeles, Aug. 16, 2014. - MARK RALSTON/AFP/Getty Images

The public quarreling between Prime Minister Benjamin Netanyahu and US President Barack Obama continues to break new records, as Netanyahu persists in shooting poisoned arrows at Israel’s greatest ally. My colleague Ben Caspit so aptly wrote Oct. 7 in Al-Monitor, “Netanyahu gambles on Israel’s future and here, in his country, they applaud him.”

The Israeli public — whether it applauds Netanyahu or feels distinctly uncomfortable about his needling of the Americans — believes that Netanyahu and Obama do not much like one another. In fact, mutual loathing and contempt would more precisely describe their feelings. Israelis are convinced, however, that the relationship between the superpower and its Israeli ally is firm and steadfast, resting on common interests and unaffected by the messy relationship between the two men. So what, they ask, if Netanyahu needled Obama about his “American values”?

Israelis living within the boundaries of their own country are not always sensitive to or even aware of nuances involved elsewhere. But Israel’s prime minister — who lived in the United States, studied at a Philadelphia high school and eventually served as Israel’s ambassador to the United Nations — is expected to be deeply familiar with them. Saying of the US president that he does not act according to “American values” is almost tantamount to accusing him of treason. That blow to Obama was so aberrant and painful that White House spokesman Josh Earnest hurried to disdainfully reply that those same American values were, among other things, underwriting the Iron Dome air defense project.

Although Obama is not viewed as an especially popular president, at least according to some polls, American public opinion is unforgiving when it comes to unbridled criticism from the outside. What is permissible on one’s home turf is inappropriate coming from a prime minister of a foreign country. This was no longer criticism “between friends,” but wild exaggeration. The seeds of calamity being sown by Israel now will not wither on the day a new president moves into the White House.

The messy relationship between the White House and the prime minister is not the only issue that should worry the Israeli public. For many years, American Jews have been undergoing a dramatic and extensive transformation — namely, they no longer feel bound to support Israel’s actions under all cirumstances or at any price, as had been de rigueur in the past.

Six years ago and against this backdrop, J Street, a new Jewish lobby organization, was founded. Its mere establishment provoked an outrage within the American Israel Public Affairs Committee (AIPAC), the veteran American Jewish lobby. As far as J Street is concerned, Israel can be criticized in regard to the peace process. The organization's leaders support the two-state solution and advocate a concept whereby one can care for Israel and support it while also supporting the Palestinians' right to an independent state. Thus, it has gathered momentum, especially among young American Jews.

This crack in blind support of Israel is reflected not only in the political schism among Jewish organizations, but also in the significant changes taking place among young American Jews, the third generation in the United States, and their attitude toward Israel. Israel no longer shapes the identities of this generation of the American Jewish community.

Professor Steven Cohen of the Hebrew Union College-Jewish Institute of Religion (Jerusalem campus) has been researching the US Jewish community for many years, and in particular the processes they have been undergoing and their changing relationship with Israel. In his studies, Cohen explains the processes producing the trend of alienation and estrangement toward Israel among the younger generation. He also conducts an intergenerational comparison with regard to Israel.

Cohen explains that the older generation, the Holocaust generation, had an experiential linkage with Israel. Even its children, who experienced the 1967 Six-Day War and the pro-Israeli mobilization for the country, developed a strong sense of connection to it. A large part of these first and second generations generally viewed (and continue to view) Israel as a socially advanced, peace-loving country, competent and democratic.

Today, however, Israel is viewed in a less positive light through the eyes of the younger generation. The trend Cohen revealed is getting stronger and expanding. American identity among young American Jews is much more significant than the common denominator that united their parents and grandparents — the State of Israel. This third generation was raised on American values, essentially comprised of human rights, equality, democracy and acceptance of the other. These values are empathetic and considered almost sacred in the United States, a society eager to erase the shame of slavery and discrimination toward African-Americans. The trend among young Jews has not gone un-noticed by Jewish Zionist organizations.

In an interview with Al-Monitor, Cohen said that the phenomenon of Jews distancing themselves from Israel will continue to grow over the years for two reasons. The first is the moral environment in which young American Jews are growing up. It is an environment where the American left criticizes Israeli policy and supports the Palestinian position. The second reason is mixed, inter-religious marriages.

“Before the Gaza war,” said Cohen, “we witnessed a growing trend of distancing from Israel among Jews under 30. I have no doubt that after Operation Protective Edge this trend has been even more reinforced, although we don't yet have the surveys or indexes to prove that.”

Now we get back to “American values,” the ones that Netanyahu questioned in light of the US administration’s opposition to the advancement of construction plans in Jerusalem’s Givat Hamatos neighborhood.

Persistently and determinedly, the wonderful alliance between Israel and the United States is gradually cracking. An atmosphere of mistrust is taking control of a relationship that was once stable, but is now glaringly uncertain. We saw this during Operation Protective Edge and the insulting, unprecedented attack on Secretary of State John Kerry, and it continues. Again and again, Israel has viewed the alliance with the Americans as something it can take for granted, but it is not reading reality correctly.

While the noose of international isolation tightens around Israel, and most of the European and Scandinavian countries adopting a one-sided and sometimes an anti-Israeli policy, the last thing we can allow ourselves is to lose Israel’s great friend and ally, the United States.

Every blow aimed at the US administration from the outside, every confrontation between Obama and Netanyahu, above and below the belt, embarrasses the American Jewish community. Especially in regard to the younger generation, such criticism only strengthens their American identity at the expense of their identification and solidarity with Israel.

Therefore, those who believe that the American Jewish community will serve as Israel's Iron Dome, to defend Israel from the US administration, are not correctly reading the bold writing on the wall — the wall of support that has cracked.