Will Israeli-Palestinian conflict escalate in December?

Both Israel and the Palestinians are using the period of international deadlock at the end of 2016 to consolidate their support bases instead of advancing dialogue initiatives. 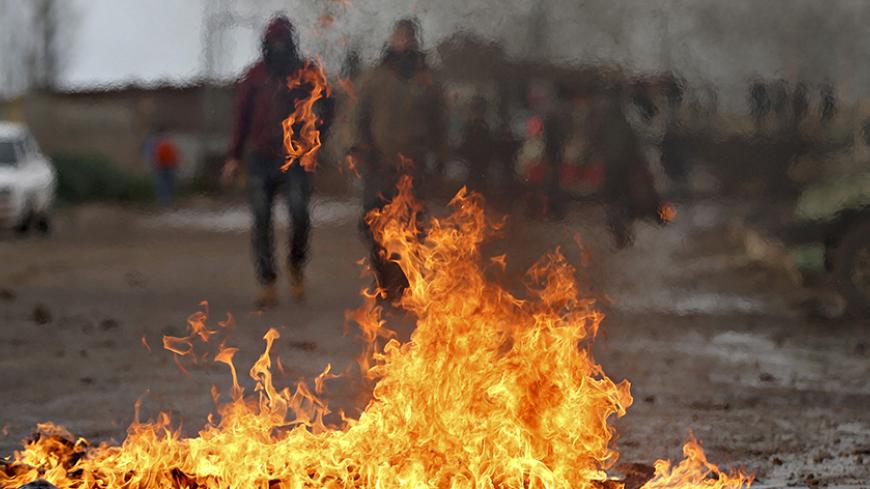 Palestinians are seen behind flames from burning tires during clashes with Israeli troops in Qabatya, near Jenin, West Bank, Feb. 22, 2016. - REUTERS/Mohamad Torokman

While rumors are floating in the media about a possible Abbas-Netanyahu summit in Moscow or Cairo, in reality, Israeli and Palestinian parties are preparing to consolidate their domestic hard-line positions in order to prepare for a period of deadlock and a possible wider outbreak of violence toward the end of 2016.

Israeli Prime Minister Benjamin Netanyahu is interested in headlines on such a summit with Palestinian President Mahmoud Abbas to protect himself from American and European pressure to advance the two-state solution and to stop settlement expansion. Under the cover of this upcoming summit, the Israeli government continues to build in the West Bank, undisturbed by the international community.

At the same time, both the Israeli and Palestinian leaders are preoccupied with fortifying their internal coalitions.

In the Palestinian camp, there are voices predicting outbreak of an armed intifada before the end of 2016.

For now, Palestinian political energies in the West Bank are focused on the municipal elections slated for Oct. 8 this year, which were recently suspended under Palestinian court order. A senior PLO official in Ramallah told Al-Monitor on condition of anonymity that in the West Bank Fatah should have — when and if elections take place — the upper hand. The official noted that in the Gaza Strip, on the other hand, Fatah feared that Hamas will manipulate the results in its favor, despite the economic crisis. In addition, he alluded that a compromise between Abbas and his bitter enemy former Internal Security Chief Mohammed Dahlan might be in the making, as Al-Monitor has recently reported.

In any case, the PLO official said that in 2016, Fatah will be focused on consolidating its power in the Palestinian Authority, as no two-state solution process is possible.

In Israel, there is a mirror image. Netanyahu understands that, given the American transition, this is the time to fortify his right-wing base. His main vehicle for this, besides spreading rumors on an eventual meeting with Abbas, is to expand settlement construction and legalize settler outposts. On Aug. 31, the government decided, through the Israeli civil administration in the West Bank, to authorize additional settler units in the Jerusalem area, to retroactively legalize 178 settler units just outside the Green Line and to advance plans for a 234-housing unit project in the Elkana settlement.

The US administration was dismayed by this decision. White House press secretary Josh Earnest expressed these sentiments by saying, “This significant expansion of settlement activity poses a serious and growing threat to the viability of a two-state solution.”

And so, the issue of retroactively legalizing illegal outposts erected by Israeli settlers is greatly distressing. It leaves the expansion of the settlements in the hands of the settlers.

Both the Israelis and the Palestinians are using this period of international deadlock to consolidate the base of their political support in order to prepare for another year of political stalemate. By focusing on mutual hostilities (as a way of consolidating public support), both parties are most probably leaving the door wide open for the more violent extremist elements on both sides.

The PLO official said that much like 1987, with the first intifada breaking out in December that year, “December 2016 could, given the desperation of Palestinian public opinion, witness the beginning of the third intifada.” He analyzed this eventuality also from a more strategic political point of view. He, a well-known pragmatist who took part in previous peace negotiations, today believes that an armed intifada, led possibly by Abbas and Dahlan, could be the only way to awaken the international community and the next US administration to the necessity of Palestinian statehood.

Concerning this Palestinian threat, an Israeli Foreign Ministry official noted that Israeli intelligence is aware of the growing tendency within Fatah to prepare for an armed intifada: “These are veiled threats. An intifada will quickly turn against Abbas and his corrupted regime,” he argued. The Israeli strategy for the last part of 2016 is to emphasize to the United States and the European Union the rejectionist violent nature of the Abbas regime, to defend Israel’s national and civilian interests in the West Bank, to curtail the assistance of international aid organizations whose finances are used to arm Hamas and to prepare for the American transition.

And so, with none of the sides sincerely contemplating an initiative to break the diplomatic deadlock, the Israeli-Palestine horizon, even in the foreseeable future, is filled with dark clouds of possible violence.