Perhaps in retaliation for its successive defeats by the Iraqi army and despite wide efforts to maintain security, the Islamic State is still bombing areas recently liberated from its control. 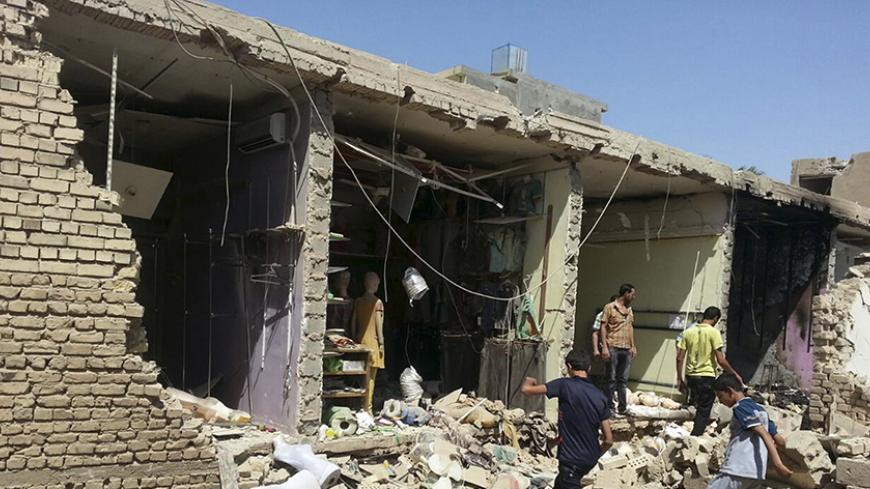 Residents inspect a market after a bomb attack in Fallujah, Iraq, Aug. 3, 2014. - REUTERS

BAGHDAD — The city of Fallujah is being hit by car bombs once again, five months after Iraqi Prime Minister Haider al-Abadi announced its liberation. Car bombs are not common in the northern and western cities of Iraq, as most attacks occur in Baghdad and the south of the country.

The latest attack happened Nov. 17, when a car bomb struck a wedding party held in Amiriyah Al-Fallujah, in Anbar province. The city has been the scene of fighting between the government forces and the Islamic State for two years now.

A video of the explosion quickly spread on social media. It showed dozens of guests dancing the traditional dabke at the wedding, celebrating the end of years of suffering under al-Qaeda and IS rule. But the bomb crushed the celebration and turned the wedding into a funeral, killing 17 people and wounding 30.

IS claimed responsibility for the attack in a statement, saying it targeted what it calls “Sahawat al-Radda,” groups funded and sponsored by disbelievers and apostates. According to the statement, a booby-trapped car had been parked near the wedding party.

The local Anbar government considers the attack a retaliation for the military operations led by the government forces against IS in Mosul.

Rajee Barakat al-Issawi, a member of the security committee of the Anbar provincial council, told Alsumaria TV Nov. 15 that there are more unexploded devices and car bombs in the city of Fallujah. He added, “There are locations that the security forces have yet to search.”

The day after the wedding attack in Amiriyah Al-Fallujah, the security forces in Anbar province arrested seven people in connection with the attack. The investigation is ongoing.

IS had been expected to continue to use its cells in the liberated areas to destabilize the security situation there.

Iraqi President Fuad Masum said in a Nov. 18 press statement that the attack will not go unpunished. But Massum’s statement is similar to those of Iraqi officials who promised to punish the perpetrators of other terrorist attacks and did not follow through.

The security situation in Anbar province is deteriorating despite the security alert and intense surveillance on the province’s borders to prevent possible IS attacks. That the violence has not halted means that IS cells remain active inside the province and the area has not been completely cleansed.

The wedding attack, a major and tragic incident, pushed Iraqis to vent on Facebook. Fallujah, where there is a heavy presence of security forces, had expected such attacks to end after its liberation from IS. However, the wedding attack in Amiriyah Al-Fallujah was not the first in the area since its liberation. On Nov. 14, two car bombs exploded near a government building in Al-Fallujah district, killing nine people and wounding 26.

The wedding attack came two days after Issawi promised that the Nov. 14 attacks would not be repeated. Such unfulfilled promises are deepening the mistrust between Iraq's security officials and its citizens.

Following the twin car bomb attacks in Fallujah, a state of alert was announced in other cities of Anbar province in anticipation of further attacks.

According to the Anbar provincial council, the attacks in Fallujah are the result of the city's going easy on terrorists. The council stressed the “need for a force from inside the province to impose the rule of law” in a city where families of IS members are cooperating with the group.

Before the Fallujah attacks, the city of Tikrit, in Salahuddin province, was struck multiple times. A car bomb killed seven citizens and wounded 15 others Nov. 6. An explosive device detonated in the nearby city of Samarra near a parking lot that is frequented by Shiites, killing 10 Iranians.

The attacks targeting the areas liberated from IS are an attempt by the group, which still believes these areas are still under its control and considers the residents its followers, to destabilize the security situation there.

Iraqi security officials expect new attacks in these cities, suggesting that the authorities may have information about potential IS military operations. They will need to establish a new security plan that can meet Iraq's changing security challenges.