The head of Egypt's Consumer Protection Agency has called on citizens to refrain from buying basic commodities for one day in an effort to drive prices down in a boycott that analysts say will be far too short to work. 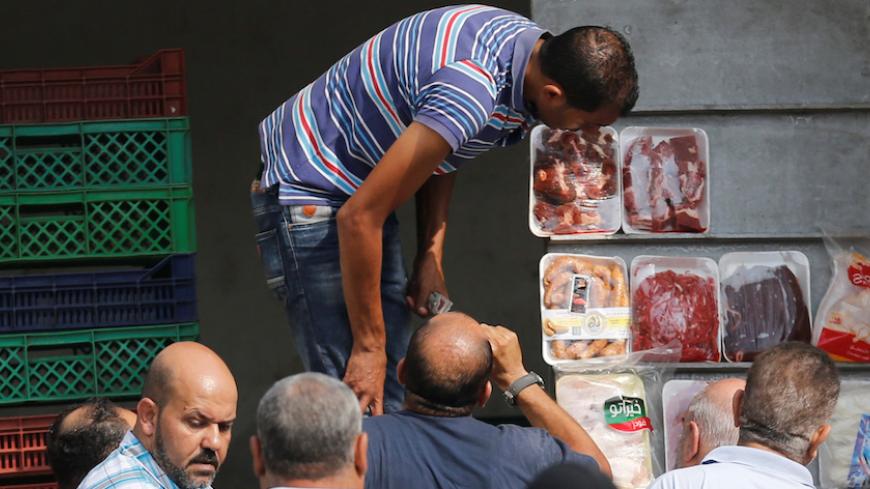 A man asks for the price of subsidized food in a popular market at Abdeen Square in Cairo, Egypt Oct. 20, 2016. - REUTERS/Amr Abdallah Dalsh

CAIRO — “A day without buying,” a bizarre campaign launched by Egypt’s state-run Consumer Protection Agency (CPA) on Nov. 16, is a rebuke to traders after the state failed to rein in runaway inflation caused by the floating of the Egyptian pound and price manipulation by retailers withholding basic goods from the market.

CPA head Gen. Atif Yaacoub said in a Nov. 12 statement to Al-Hayat TV that the first protest, set for Dec. 1, would be a total boycott of all products, not just basic goods.

“The first day of every month will see consumers’ purchasing power boosted, and by refusing to buy goods on this day, they will send a message to retailers that consumers are able to boycott and control the market,” he said.

He explained that the one-day symbolic boycott will be a warning of further escalation if there was no response. He threatened to blacklist retailers and shops that were exploiting price hikes. He also threatened boycotts of specific products that perish if they go unsold.

In another statement to Youm7 on Nov. 17, Yaacoub called on consumers across the country to take part in the boycott on Dec. 1 to push prices down and force retailers to charge normal rates. He said the prices of many goods had risen unjustifiably after the pound was floated. The public should protect its rights and demand lower prices, especially while personal incomes are stagnant, he said.

The campaign is not the first of its kind created by the CPA head. On Aug. 26, he suggested a return to using the qirsh (a hundredth of the Egyptian pound) to drive down prices.

“I support the theory of the qirsh and I say it should be used again, even if I am mocked,” he said. But the qirsh did not return to circulation, prices kept rising and the exhausted public did not respond to Yaacoub, an official who seemed to have forgotten his main job of protecting the consumer.

Asked about the protest, Yaacoub told Al-Monitor, “This is a domestic issue, and I cannot speak about it with a foreign media outlet.”

However, in statements to Masr Al-Arabia on Nov. 16, he said he had proposed the initiative as a private citizen, not as a government official, and that the aim was to fight inflation moving forward. He called on civil society organizations to support the campaign and invited the public to report retailers who do not provide receipts with the accurate price, for tax purposes.

Boycott campaigns have a long history in Egypt. In the 1980s, the prices of meat skyrocketed and President Anwar Sadat decided to punish traders by banning the slaughter of livestock for two months. The move was successful, forcing butchers to cut their prices.

But 2016 is a different era. Goods are in short supply and sell for well over their true value. Some products such as sugar, rice and oil have virtually disappeared from Egypt's stores due to merchants’ attempts to monopolize the market and raise prices, or because of smuggling to neighboring countries.

Yaacoub’s remarks have been criticized by economists and members of parliament, who said the campaign would have no effect on prices.

“The public will not support the initiative, nor will it have any economic benefit or impact on prices — it’s an illogical idea that shows a lack of expertise among those in charge of the CPA,” said Ahmed Sheiha, head of the importers division at the Cairo Chamber of Commerce. “You can’t stop the public from buying what they need. If this initiative were serious and well thought out, it would target specific companies and overpriced products, making up a list and announcing a long-term boycott— not just for a single day — until they cut the prices of those specific products,” he told Al-Monitor.

“The CPA cannot protect the public, but needs protecting itself, as it has no authority over markets,” Sheiha added.

Reactions on the Egyptian street have been mixed. Some citizens back the boycott campaign, hoping it will lower prices. Others worry that they can’t refrain from buying food even for one day.

One citizen told Al-Wafd Nov. 14, “I strongly reject the initiative,” while another said, “How can I boycott buying? Does this mean we have to deprive ourselves of food?”

A woman told Al-Wafd, “I sold my land so I can provide a living for my children. … Life has become extremely difficult.” Meanwhile, another citizen told the paper he hoped the campaign would succeed and achieve its goals.

Salah Fahmy, an economics professor at Al-Azhar University and frequent economics contributor, said the campaign could have benefits. But, he told Al-Monitor, “The public needs to take serious steps rather than simply demonstrating.”

Fahmy continued, “Retailers need to know that consumers control the market and the movement of sales. When the pound fell against the dollar, traders were greedy and kept raising their prices, putting their hands into the public’s pocket. It’s time to rebuild a society of compassion and solidarity,” he said.

Ali Al-Musaylehi, chair of the parliamentary economics committee, told Sada al-Balad Nov. 15, “Refusing to buy goods for a single day will only have a symbolic impact rather than actually harming retailers. This kind of initiative will not lower prices or tackle inflation — although it sends traders a message that we are able to boycott.”

He added, “High prices can only be addressed with serious measures such as using receipts, making sure products are available in the market and tightening oversight of the markets.”

Amru al-Gohari, undersecretary of the parliament's economic affairs committee, told Parlmany Nov. 16 that the initiative would not benefit the public.

“How can you stop people buying food for a day or several days?” he said. “The public might agree to buy what they need a day in advance … but that means that retailers will simply make two days’ sales in one day, which is an acceptable yield for any retailer. Some traders are powerless, as prices have risen because of the pound’s fall against the dollar and the rising price of fuel,” he said.

“How can we demand the public stop buying food when many people buy food from day to day? The role of the CPA is to monitor prices and provide markets with essential strategic commodities for public consumption. If the government provided six months' worth of essential goods, merchants would not be able to raise prices above those of government goods,” Gohari added.