Already rocky relations between Turkey and the United States are likely to worsen if the White House approves an expected Pentagon request to provide more weapons to the People's Protection Units. 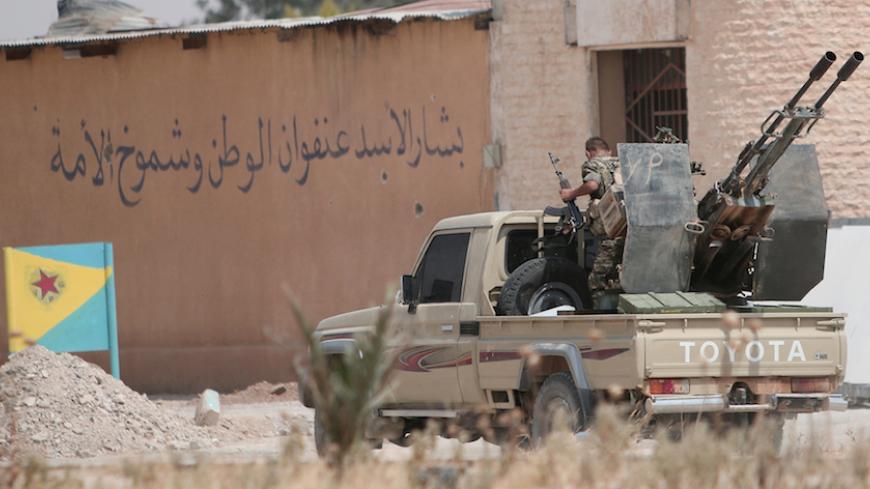 A Kurdish fighter from the People's Protection Units rides on a pickup truck mounted with an anti-aircraft weapon in the Ghwairan neighborhood of Hasakah, Syria, Aug. 22, 2016. - REUTERS/Rodi Said

Turkey’s fraught relations with the United States over the US alliance with the People’s Protection Units (YPG) in the war against the Islamic State (IS) in Syria have taken another turn for the worse as the Pentagon considers providing more arms to the Syrian Kurdish militia while continuing to spurn Turkish demands for armed drones.

Turkish President Recep Tayyip Erdogan aired his displeasure in remarks at an Istanbul conference, saying, “You ask the United States for an unmanned aerial vehicle. … The answer you get is that the Congress didn’t approve this. This is the situation that we are constantly faced with. Hey, aren’t we supposed to be strategic allies?”

Burhan Kuzu, a veteran member of the Justice and Development Party and an Erdogan adviser, struck a similarly anti-American tone in an interview with Sozcu. Kuzu claimed that the botched coup attempt in Turkey in July had aimed to “create a Kurdish state in eastern Turkey” according to a plan hatched by Israel and Great Britain and “approved” by the United States.

Turkish Defense Minister Fikri Isik took things a step further, charging that the United States had “other plans” for Syria and that it was “stubbornly backing” the YPG.

News that the Department of Defense (DOD) wants to provide more arms to the YPG first appeared in The New York Times more than a week ago, sparking a fresh barrage of anti-American invective from Ankara.

The arms would strictly be light weapons and combat gear for use in a planned offensive against the IS “capital” of Raqqa, in which the YPG and Arab allies assembled under the umbrella of the Syrian Democratic Forces are expected to take a leading role. The DOD has yet to formally seek White House approval for the weapons’ transfer, but is likely to do so in the coming days.

The arms package aims in part to appease the YPG after Washington’s refusal to back the group's plans to connect the territory it controls to the east of the Euphrates with another Kurdish-run enclave, Afrin, that lies to the west of the river.

The Kurds’ effort to join their “cantons” was disrupted when Turkish troops unexpectedly moved into northern Syria in August to drive IS from its border and also to push back the YPG. Turkish fury over Washington’s relationship with the YPG stems from the organization's intimate ties with the outlawed Kurdistan Workers Party (PKK), the rebel group fighting for Kurdish autonomy in Turkey.

Washington publicly maintains the fiction that the YPG and the PKK, which is on the State Department’s list of terrorist organizations, are separate. Administration officials acknowledge, however, in private that they are one and the same and have sought the YPG’s assistance to persuade the PKK to call for a unilateral cease-fire to fighting in Turkey, but to no avail.

The PKK sharply escalated its attacks after the breakdown of a two-year cease-fire last July and is increasingly relying on improvised explosive devices. At least two Turkish soldiers died in the southeastern province of Hakkari Oct. 3 after a roadside bomb planted by the PKK struck their vehicle.