Turks love their language, but also fight over it

Turks proudly celebrate their language, but they have always fought over it. 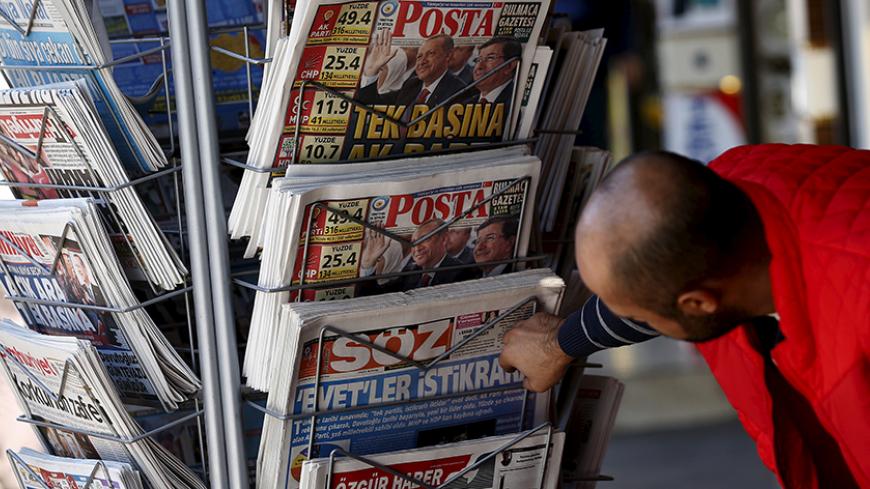 A man looks at Turkish newspapers at a kiosk in Diyarbakir, Turkey, Nov. 2, 2015. - REUTERS/Stoyan Nenov

Each year on Sept. 26, Turkey proudly celebrates its annual Turkish Language Day with conferences and festive ceremonies around the country. This year was no exception, with many leading politicians issuing statements calling on the Turkish people to continue their efforts to cherish the Turkish sensibility of language for future generations. President Recep Tayyip Erdogan said that Turkish is an “assurance of our people’s unity and solidarity.” Prime Minister Binali Yildirim hailed Turkish as a language that is among the most important and prevalent ones in the world, in terms of its geographical spread, the number of people who speak it and its richness. Kemal Kilicdaroglu, the leader of the Republican People’s Party, extensively praised the heritage Mustafa Kemal Ataturk’s reforms produced for the Turkish language.

As a foreigner who learned Turkish as a fifth language, let me tell you that the Turkish mother tongue is quite difficult to learn — as an example, how about "Cekoslovakyalilastiramadiklarimizdanmissiniz" as one word — but also very beautiful and captivating. What is even more fascinating, though, is the political wars that are waged over the language.

One of the most important fronts in these wars is between the “old” and the “new” Turkish, and the ideologies that both symbolize in Turkish minds. The former reflects loyalty to the Ottoman past, while the latter refers to Ataturk’s so-called language revolution. Today, proponents and opponents of historical changes of the Turkish language continue clashing on the legacy left from the early Republican era.

The root of the problem is modernization. There was no strict language policy in the very diverse and multilingual Ottoman Empire. But in time a huge problem arose, as minorities — allowed to speak their own languages — could not understand Turkish people who spoke folk Turkish, perceived as a nomad language at the time. Moreover, the Ottoman language, a “higher” Turkish with strong influences of Persian (seen as the language of science and literature at the time) and Arabic (for its importance as the language of the Holy Quran), was spoken by the privileged ones in the palace. Something had to be changed. This first came with the Tanzimat (Reform) era that began in 1839. So by the late 19th and early 20th centuries, attempts for language simplification aimed at a “New Language” (Yeni Lisan) that everyone would understand were well in place.

When Ataturk came to power, he launched a “language revolution” as one of the most important tools for homogenizing the nascent nation. In 1928, the Arabo-Persian Ottoman script was changed to the Latin alphabet. Moreover, the Turkish Language Institute (TDK), founded in 1932, engaged in an effort to create “pure Turkish” (oz Turkce) by purging foreign elements and then standardizing to assimilate local dialects and languages. As academic Yilmaz Colak said, “It was one of the constituent parts of the planned secular conversion from the imperial religious to national secular culture.”

As a result of that “linguistic engineering,” speakers of today’s Turkish can choose between different words with the same meaning. Usually, this reflects one’s education, political orientation or background, so that a more religious Turk and practicing Muslim will prioritize usage of Ottoman-, Arabic- or Persian-influenced words. On the other hand, one who is more secular and republican nationalist will probably use “pure” Turkish words introduced by the language reform — or merely use Western words. For example, the words “mustesna,” “ozel” and “spesifik” mean the same thing, but they reflect traditionalism, Ataturkism and Westernism, respectively. One study confirmed how Turkish politicians also choose words attentively and “borrow their words from the languages they associate with their political orientation.”

Erdogan is one such politician who is careful about language. Last year, he stated at the opening of a private university, “It would be more beautiful if we say ‘kulliye’ [Ottoman architectural concept] instead of 'campus.'” It is also not surprising that Erdogan and his Justice and Development Party (AKP) deputies and followers praise Ataturk as a Gazi when they refer to him. Yet Mustafa himself had dropped that title — a word of Arabic origin — when the parliament gave him the name Ataturk (“Father of Turks”) in 1934, soon prohibited by law for any modification or use by anyone else. Expectedly, today the secularists use Ataturk — and rarely ever Gazi — when referring to him.

Another aspect of Ataturk’s language revolution was to force non-Muslims and non-Turkish Muslims (such as Kurds) to speak Turkish. This had a role in the making of “the Kurdish question,” and Kurds rightfully demanded the right to use their language in public, which was banned by Turkey’s past linguistic illiberalism. The list of positive steps that the AKP has taken while in power to offer more freedom for Kurds to practice Kurdish in public is not short. Unfortunately, the Kurdish demands do not end with those related to language, but extend to political claims that the government is unwilling to accept.

The main parties seem united on this matter, but the Nationalist Action Party is more hawkish than others. Its leader, Devlet Bahceli, used Turkish Language Day this year as an opportunity not only to panegyrize the Turkish language, but also to criticiz the government for any accommodation of Kurdish demands like education in their native language as a “wrongdoing” and a “sin.” Bahceli said, “Turkish is an oath; Turkishness is an honor. … Let’s not forget, the dream we saw is Turkish, our ideals are Turkish, our country is Turkey, and the hope and horizon of all of us is Turkey.”

New battles over the Turkish language have lately been added to existing tensions. Since July, Turkey has been traumatized by a failed military coup that the government blames on the Gulen community. Hence, the Foreign Ministry is doing its best to prevent festivals and cultural activities previously organized by the Gulenists from being held.

There are even controversies about patriarchy and misogyny transmitted through language. Earlier this year, the TDK's definition of the word “dirty” caused a flood of anger, because it gave as an example a “[woman] who is menstruating.” Similar reactions occurred earlier for the word “musait,” a Turkish word of Arabic origin meaning “available,” because the TDK explained it as a “[woman] who is available to flirt with and who can easily flirt.” Despite harsh criticisms, the TDK defended itself by claiming these definitions exist among people. Unfortunately, as critics rightly point out, “Through its many proverbs and expressions, the Turkish language has for decades allowed certain ideas about women to normalize actions of violence against them.”

Furthermore, critics complain that every new rule the TDK comes up with only creates more complications in the language. Linguist and writer Feyza Hepcilingirler said, “Instead of dealing with punctuation rules [related to freshly publicized changes for writing names of institutions], [the] TDK should [take] steps [to preserve the] Turkish [language] from degenerating tendencies and attacks from English.” Haberturk daily’s writer Murat Bardakci harshly criticized these changes as “nonsensical, unnecessary and confusing,” suggesting that no language in the world has probably been as pillaged or suffered as much as Turkish. Again, the TDK responded combatively to media criticism for publishing news without consulting them first, stating that this is not a new decision and “even primary school kids know [these punctuation rues].”

But while the TDK receives tough love for its decisions, others successfully promote interest in language and inspire interest for words both new and old. The forgotten words and their beautiful meanings that Banu and Onur Ertugrul have passionately shared on their Lugat 365 social media accounts since 2015 have become a sensation in Turkey, regardless of fans’ identities. The couple intended to popularize words that are no longer used among younger generations — their effort became so popular that the couple’s initiative has spread to a published book and on posters, bags, artistic objects and widely sold T-shirts. Separately from the commercial side, the enthusiastic Ertugruls successfully transmitted their appreciation for the value of old words into meaningful and attractive treasure.

So many different divisions continue to plague Turks. If only the Turkish language, with all its beauty, did not have to suffer from language battles its speakers bring upon themselves.