Despite his policies in polar opposition to those of founder of modern Turkey Mustafa Kemal Ataturk, President Recep Tayyip Erdogan has touted him as a brother whose memory is only served by his own ruling party. 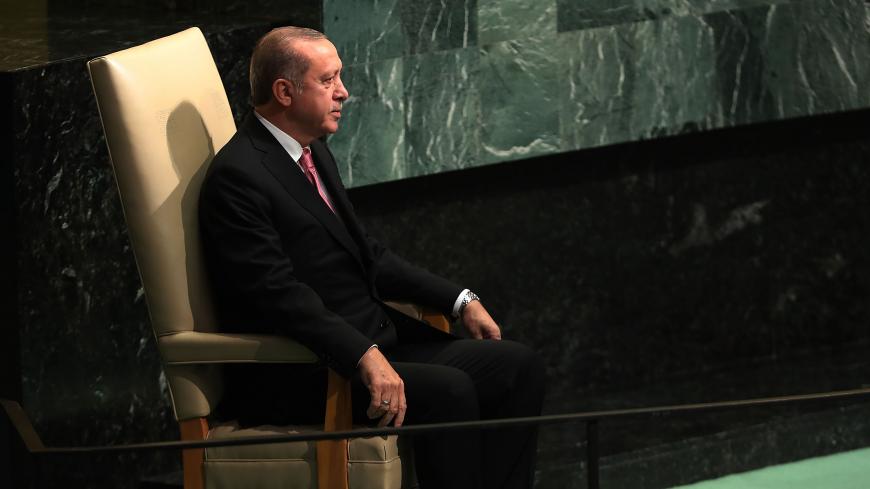 “He was Dictator in order that it may be impossible ever again there should be in Turkey a Dictator,” concluded the benign interpretation of H.C. Armstrong, who was among Mustafa Kemal Ataturk’s first biographers, in his short and controversial account of the founder of modern Turkey, “Grey Wolf.”

Even a casual observer of contemporary Turkey would glean that if this truly was Ataturk’s goal, he has failed. Turkey’s President Recep Tayyip Erdogan is regarded as one of the most dictatorial leaders to guide the country since the great man himself. What's more, after a career spent in an Islamist movement erected in opposition to Ataturk’s steamrolling push to secularize Turkey and turn its back on its former Muslim dominions, Erdogan, a professionally trained Muslim cleric, has set about making Ataturk all his.

This astonishing volte face was detected early on by Al-Monitor columnist Mustafa Akyol, who explored some of the parallels between the autocrats despite their polar-opposite worldviews.

But nothing prepared Erdogan’s pious base for his latest and very public embrace of Ataturk on Nov. 10, the 79th anniversary of his death. Erdogan breezily claimed that the ties between the late leader and the pro-secular main opposition Republican People’s Party (CHP), which Ataturk founded, had ended on the day that he died. Coup plotters and assorted others “hostile to the history of our homeland and the values of our people” had only invoked his name.

“Are we going to leave [Ataturk] to the hands of those fascist circles with their Marxist rhetoric?” he thundered. “We will not allow a shapeless party such as the CHP to steal Ataturk from our people.”

Pro-Erdogan scribes hastily adapted to the times. “The Erdogan revolution was never against Ataturk, but without doubt was against Kemalism, which was fabricated in his name,” wrote Rasim Ozan Kutayhali in the pro-government Daily Sabah.

Some Islamists remained unswayed. “Look at how [Erdogan’s Justice and Development Party] branches are struggling to prove they are the foremost [defenders] of Ataturkism … Is championing Ataturkism left to [them]?” wrote Hakan Albayrak, a respected Islamist columnist in the mildly oppositionist daily Karar.

Ataturk means “father of the Turks.” The moniker was bestowed on him when the parliament adopted the Surname law, making it mandatory for all Turks to pick a last name in line with Ataturk’s westernizing reforms. Until recently, Erdogan and his fellow Islamists determinedly referred to him by his first names, Mustafa Kemal, to air their disapproval. Pro-Islamist screeds would peddle rumors that Ataturk was a crypto-Jew, his mother Zubeyde a woman of loose morals and his Anglophile wife Latife a harridan.

The consensus among Erdogan’s critics is that his newfound love of Ataturk is meant to justify his bloated monopoly over power in the wake of last year’s bloodily botched coup. Just as Ataturk had to keep an iron grip on the young and struggling republic to ensure its survival in the face of myriad enemies, so too does Erdogan, according to this reasoning. Thus jailing tens of thousands of citizens on thinly supported terror links and using military force to snuff out Kurdish nationalism is de rigueur.

Others say that as with fellow Muslim Brotherhood travelers, Erdogan's experiment with political Islam — tarred by rights abuses, rampant corruption and a sputtering economy — has run out of steam. Ataturk is a handy substitute.

Jenny White, a widely acclaimed author and anthropologist at Stockholm University’s Institute of Turkish Studies, told Al-Monitor, “[Erdogan] has long represented his new Turkey as the outcome of a ‘second war of liberation,’ thereby refashioning the story of the birth of Turkey with himself as father of the nation.” White noted, “The image of the stern yet protective patriarchal father has deep resonance in Turkey society even today and has been a mainstay of political rhetoric, claimed by politicians as well as the military. In times of chaos and uncertainty, Turks have turned to the strong father figure, whether the army, the state or in the polls.”

Nicholas Danforth is a historian and senior policy analyst at the Bipartisan Policy Center. He agrees that there is nothing novel about Erdogan’s approach. Danforth told Al-Monitor, “Even the most revolutionary regimes often end up co-opting powerful historic symbols instead of replacing them. After overthrowing the Ottoman sultanate, Turkey’s republican government began to selectively appropriate the glorious achievements of Ottoman history to bolster their nationalist narrative.” Besides, Danforth added, “constantly hearing Ataturk described as being ‘pro-Western,’ it's easy to forget that he earned the popular mandate to carry out his ‘westernizing’ reforms through a series of military victories against hostile Western powers.”

Since 2015, Erdogan has turned his back on the Kurds in the hopes of gobbling up the base of the far-right Nationalist Movement Party (MHP). He may well have turned his sights on disillusioned CHP voters to bolster his standing ahead of the critical municipal, parliamentary and presidential elections scheduled to be held in 2019.

The results of a trusted opinion poll shared with Al-Monitor suggest that Meral Aksener, who broke away from the MHP to form her own party and run against Erdogan, is drawing most of her support not as predicted from either the MHP or the AKP, but from the CHP. The same survey indicates that Erdogan remains the country’s most popular leader, with half of respondents saying they support him, and that the neophyte Aksener trails the CHP leader by a mere seven points with 20% of the vote.

It thus perhaps makes sense for Erdogan to target the CHP base.

Either way, in Danforth’s words, “It's easier for Erdogan to embrace Ataturk now that he’s the one who gets to decide what version of Ataturk he will embrace.”