Soner Cagaptay and Tyler Evans write that Turkey need not recognize the Kurdish language in a new constitution, but over time could develop a provision for public services in Kurdish. 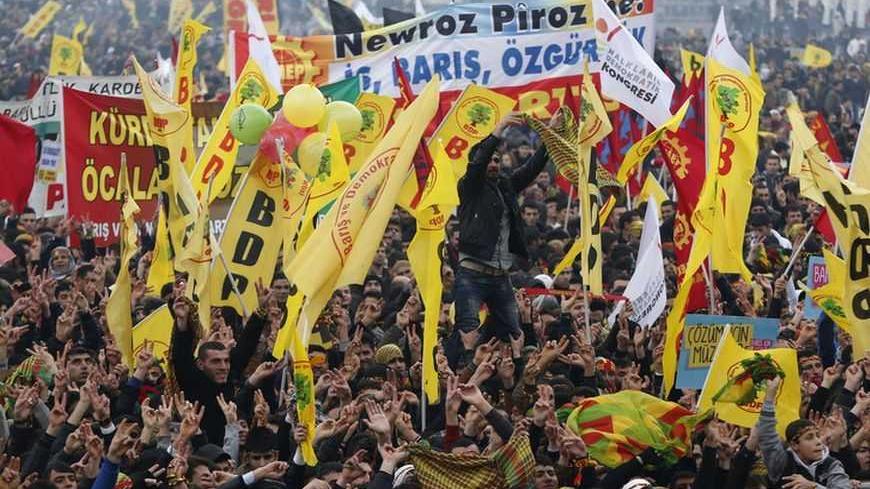 The European Union’s (EU) February 28th decision to restart membership talks with Ankara breathed life into Turkey’s EU accession prospects. And this mood of cautious optimism has only blossomed as Turkey’s government moves forward on its negotiations with the Kurdistan Workers Party (PKK). As a precursor to the talks, Ankara has demonstrated its seriousness by pushing through a number of reforms allowing the Kurdish language into the public sphere: last month a court decision removed restrictions on using Kurdish in political campaigns, and Turkish courts have begun allowing testimony in the Kurdish language. To get back on the road toward peace, democratization, and perhaps even EU membership, Turkey’s leaders will need to forge ahead on these reforms. But it won’t be easy.

Turkey is a multi-ethnic, predominantly Muslim nation that is home to Muslims of Turkish and Kurdish ethnicity. And, unbeknownst to many outsiders, it is also a tapestry of many other ethno-linguistic groups. Featured in the mix are millions of descendants of émigrés from the Ottoman Balkans, such as the Bosnians, and from the Black Sea basin, such as the Circassians. Because Ottoman rulers classified their subjects based on religious affiliation, rather than ethnicity, these Muslim groups fused into a single political entity, coalescing around the Turkish nation, as the empire collapsed. Hence, the old joke that “if you scratch a Turk, you’ll find a Circassian.”

This historical legacy has bestowed upon Turkey a mindset that is open to religious group differentiation, but resistant to notions of ethnic separateness among Muslims. This makes Turkey’s Kurdish language reform agenda unprecedented, and also a risky political wager for the ruling Justice and Development Party (AKP). Influential currents in Turkey’s political debate are already accusing the AKP of rending the very fabric of the Turkish nation.

If Europe has one lesson to offer, it is that there is no one-size-fits-all approach to language reforms. Tellingly, the EU does not have a common language policy. The clearest articulation of common European principles with regard to linguistic rights is codified in the European Council’s European Charter of Regional and Minority Languages (ECRML). This charter aims to promote “the recognition of the regional or minority languages as an expression of cultural wealth” (Art.7-1a). The heterogeneity of Europe’s language policies is manifest in the structure of the agreement, which leaves many provisions optional and encourages parties to customize regulations "according to the situation of each language."

And even with this flexibility, many countries in Europe—namely, Belgium, Bulgaria, Estonia, France, Greece, Ireland, Italy, Latvia, and Lithuania—have not acceded to the charter. This non-convergence on language policy is in large part a consequence of the political sensitivities surrounding the topic of language diversity in Europe. But even European countries with especially onerous historical hang-ups associated with language reform have been able to accomplish much in past decades.

This has often been achieved through compromises that secure minority language rights without directly treading on sensitive political grounds. France and Bulgaria stand out as especially instructive case studies for Turkey in this regard.

Like Turkey, neither country is a party to the ECRML. And in both countries the topic of language is politicized in a manner that bears certain similarities to Turkey. In France, Corsican nationalists have challenged the central authority, sometimes using violence in a manner somewhat analogous to the PKK’s violent campaign against Turkey’s centralizing tendencies. And in Bulgaria, nationalist groups such as the ATAKA party have become a grassroots force against reform, recalling Turkey’s ultra-nationalists who stand in vehement opposition to greater minority rights (incidentally, the major minority language in Bulgaria happens to be Turkish).
Yet both of these European countries have managed to accomplish significant reforms that open the public sphere to minority languages.

In 2008, after lengthy debate, the French legislature amended the constitution with a provision that officially recognized the existence of regional languages in France, describing them as “belong[ing] to the heritage of France” (Art. 75-1). In this landmark amendment, France officially recognized its ethnic and cultural diversity, although it stopped short of explicitly granting any concrete rights. At the same time, in practice France provides ample room for minority languages to flourish in local contexts. Indeed, there are 400,000 French students learning minority languages or receiving part of their curriculum in these tongues. Bilingual education, in which French and the regional language are given equal time, is offered in Breton, Occitan, Corsican, Basque, Catalan, and German. And this education is sometimes supported by public funds.

Bulgaria is a useful reference for Turkey as well. Drafted during Bulgaria’s transition from communism, the Bulgarian constitution is the result of an unsteady balance between liberal reformers and resistant nationalists. Consequently, the document does not recognize any particular minority groups; however, it does contain protections for individual cultural expression for those who identify with cultural or ethnic groups. For example, Article 54 recognizes the individual’s right “to develop his own culture in accordance with his ethnic self-identification, which shall be recognized and guaranteed by the law.”

Education in the Bulgarian language is compulsory for all citizens. However, Bulgarian Turks cannot be prevented from receiving education in Turkish alongside their Bulgarian coursework. Proposals from the Bulgarian Ministry of Education have even envisioned making Turkish part of the required curriculum in Turkish-majority areas and an optional subject in areas where Turks are a minority. In practice, Turkish is generally taught as an elective or an extra-curricular subject. The state has granted limited funding to Turkish language and literature courses and trains teachers in Turkish curriculum (Turkey often provides course materials, which Bulgaria requires be free of any Turkish state-centric patriotic sentiment).

To be sure, no combination of models from Europe can form an exact template for Turkey. Most importantly, reformers must pay careful attention to Turkey’s Ottoman legacy, which makes ethnic differentiation among Muslims an especially dicey subject. In this respect, enshrining collective rights for Turkey’s Kurds could provoke a backlash that reformers can avoid by simply taking an approach based on expanding individual rights. For instance, new constitutional provisions guaranteeing the right to education and expression in “an individual’s language of choice” while maintaining Turkish as the country’s official language, stand a much better chance of finding broad support than articles bestowing Kurdish with an official status, or granting the Kurds collective rights.

Even leading Kurdish nationalists seem to concede that specific references to Kurdish need not be included in a new constitution. Instead, sides could agree on a general clause that recognizes Turkey’s cultural diversity as well as the saliency of the Ottoman legacy in shaping national identity, while looking to the French or Bulgarian approaches for implementation. This could be supplemented by enshrining individual rights to linguistic expression, without mentioning specific languages, and while upholding Turkish as the sole official language.

The same approach can be used to reform state policy in Kurdish-majority regions in Turkey, again taking cues from the Bulgarian and French examples in education. An early step in this direction could be as simple as providing legal assurances to local politicians who communicate with constituents in Kurdish or print Kurdish road signs alongside Turkish. Such steps could develop into the provision of public services in Kurdish, although this would probably only occur in a semi-official manner, á la française.

Europe has indeed many lessons for the Turks, including some in Kurdish.

Soner Cagaptay, a fellow at the Washington Institute for Near East Policy, is the author of the forthcoming "Turkey Rising: 21st Century's First Muslim Power." Follow him on Twitter @sonercagaptay

Tyler Evans is a research assistant at the Washington Institute.