Turkey’s Laz people are awakening to their language and culture, though it is still premature to speak of a “Laz Renaissance.” 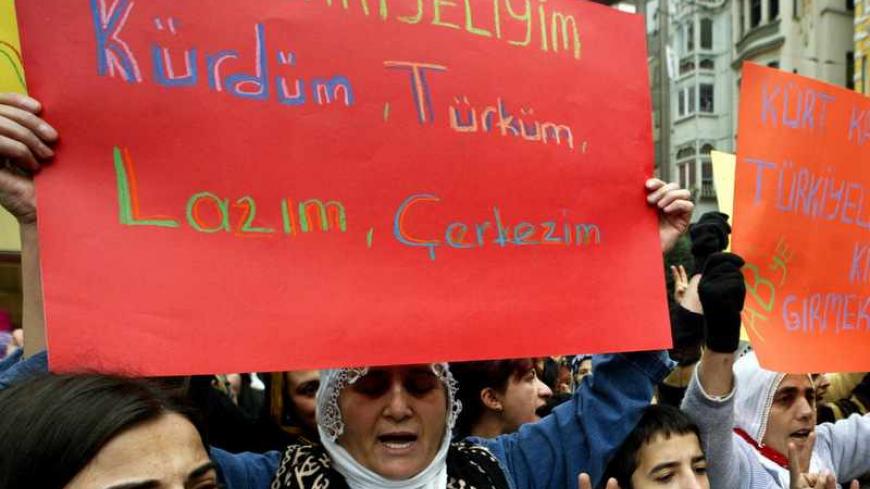 Demonstrators shout slogans as they hold up banners while staging a protest in central Istanbul Dec. 11, 2004. Banner at left reads in Turkish "I am Turkish, Kurdish, Circassian and Laz from Turkey." - REUTERS/Fatih Saribas

What could speak best of a minority’s cultural tragedy? “We are recovering the lost Laz words,” professor Mehmet Bekaroglu, the head of the Laz Institute, told me when I asked him about the cultural revival of the Laz people. Lost words? They are the words that have disappeared from the daily language after decades of disuse.

Amid the reform process in Turkey, the Laz, too, have embarked on a journey to rediscover their culture. In the eastern Black Sea towns of Pazar, Ardesen, Camlihemsin, Findikli, Arhavi, Hopa and Borcka, the population swells three or four times during the summer as natives of the region return home. The uplands come alive with the sound of kemenche and the rhythm of horon. The hazelnut crop is shelled and legends told. In the autumn, the traditional grape molasse pekmez is boiled. Each stage — the placing of the large saucepans, the mashing of the grapes, the lighting of the fire and the removal of the saucepans — is performed with special sayings.

The publishing realm has also come alive. The Lazika Publishing Collective has printed 35 bilingual Turkish-Laz books since its founding in 2010. In 2011, Lazika also began publishing a magazine, Tanura (Luminary). The first Laz magazine, Ogni (Understand, Hear) — launched in 1993 and banned after six issues — had marked a turning point for Laz culture. It was followed by Mjora (Sun) and Skani Nena (Your Language, Your Voice), with two issues each. The Laz rock band Zugasi Berepe (Children of the Sea), begun in the 1990s, set another milestone.

On Sept. 11, Turkey’s first Laz newspaper, the bimonthly Agani Murutsxi (New Star), was launched. Its name is a salute to the world’s first newspaper in the Laz language, Mç’ita Murutsxi (Red Star), published in Abkhazia in 1929 by Iskenderi Tzitasi. The paper’s owner says its aim is “to take the Laz language from the villages to the cities” and warns, “Otherwise, the Laz language will be dead in 50-60 years.”

Only a third of the Laz speak their mother tongue, but a growing number are interested in learning it. Songs in Mingrelian/Laz such as "Didou Nana," the hit by Kazim Koyuncu (the early-departed founder of Zugasi Berepe), have helped popularize the language.

A first step for teaching the mother tongue

Erkan Temel, editor of a Laz website, sees the growing activism as the outcome of links set up with the Caucasus as well as Turkey’s democratization process, while dismissing the “Laz renaissance” label. “The opening of the Sarp border crossing in 1988 by [then-Prime Minister] Turgut Ozal was a milestone, if not exactly a turning point, for the revival of Laz culture. Ogni also contributed in raising the Laz identity awareness in Turkey,” Temel told Al-Monitor. “The recent growth in cultural publications is linked to the democratization efforts in Turkey, which have stoked the Laz people’s interest in their culture.”

Founded on May 17, the Laz Institute held a promotion event on Nov. 23 that was attended by about 1,000 people. The institute’s primary mission is to lay a foundation for education in the Laz language and support Laz publishing activities. It has already assumed the major task of drawing up a Laz language curriculum after elective courses in minority languages were allowed in schools. In a small but encouraging step, Laz language classes were launched this year in Arhavi and Findikli with a total of 130 students.

Many obstacles, however, exist in the education field. Here is how Bekaroglu depicts the situation to Al-Monitor: “There are serious problems concerning the Laz language. Out of 600,000 Laz, [only] a third speak the language. A fourth of the Laz live outside the region, scattered in Istanbul, Duzce, Sakarya and Yalova. Even kids living in the Black Sea region do not speak Laz. The opening of Laz language courses [in schools] requires a certain number of students and teachers. People went from door to door to promote the Laz classes. The [minimum number of] applications, however, could not be met. There is a shortage of Laz language teachers, but no faculty exists to train such teachers. Moreover, a curriculum is needed. As an institute, we are working on that. There are also difficulties concerning the alphabet, and we are planning to organize a congress on that. The Latin letters are inadequate for the Laz language. And because all efforts on the issue are individual, different letters are often used to denote the same sound. Moreover, the [Laz] in Turkey are using some Turkish words and those in Georgia some Georgian words. All those words have [Laz] equivalents but they have been lost! Efforts are underway to recover them.”

Another debate among the Laz pertains to why the state overlooks them or why they fail to raise a loud enough voice for cultural rights. In 2004, when the government launched Kurdish-language programs on the state-run TRT broadcaster, it launched also symbolic broadcasts in Arabic, Circassian and Bosnian, leaving the Laz language out. The exclusion could hardly be explained by a lack of demand or the community’s advanced level of integration. Barring the Kurds, the other peoples in question had voiced no serious demand either, and the Bosnians even deemed the move unnecessary.

Temel says, “The Laz language was sacrificed to Turkey-Georgia friendship,” adding, “The state has no policy on the Laz. And one can hardly speak of a state policy on the Laz when the state in question has no steady policy on the Caucasus.” He said, “Ethnic deportations destroyed the multicultural fabric of Ottoman Lazistan. The state should rid itself of suspicions and concerns over the region and adopt a policy embracing all Black Sea peoples. Yet, I don’t think the government could make a Laz opening in the current circumstances.”

And here is how Temel explains why the Laz are not assertive in demanding rights: “While the Roman and Persian empires fought for centuries to control the Black Sea basin, the Laz people struggled for their survival. Then, as a result of the ‘Islamization’ policy of the Ottoman Empire and the ‘Turkification’ policy of the Republic of Turkey, the Laz lost to a great extent their ethnic identity and linguistic sensibilities. They have grown averse to making ethnic demands due to a combination of reasons, including the sway of Turkish ultra-nationalism in the eastern Black Sea region, traditional loyalty to the state and the nation, a sense of wariness against earning themselves the label of ‘separatists’ in the climate created by the dirty war against the PKK [Kurdistan Workers’ Party], their high education levels, the demographic erosion in their indigenous homeland due to intense emigration, and economic problems prevailing over cultural concerns. The overwhelming majority of the Laz have integrated strongly into Turkey’s social and political life. In this context, the prevailing political leanings of the Laz could be described as being pro-status quo or a conservative statist stance.”

Bekaroglu, for his part, says the Laz identity was shaped during the Ottoman-Russian War (1877-78) when the Russian invasion sparked an exodus to the Marmara region, engraved to present day in collective Laz memory with the “Sunne” requiem song. “The Laz region has always had a dissident streak. Rightist parties have failed to take a strong root there. The statist label for the Laz is inaccurate,” Bekaroglu said.

Little attention is also paid to the fact that the Laz people’s problems involve not only the Turkish state but also Georgia. The community’s bonds with the Caucasus are not really strong. Just as the Laz in Turkey, their cousins in Georgia, the Mingrelians, have been subjected to assimilation. “There is no radio station broadcasting in the Laz language in Turkey, but there are eight in Georgia, sponsored by the Georgian Church. It’s Orthodox propaganda 24 hours a day. They propagandize the Laz people as a sub-branch of the Georgians. The Georgian nation-state is a serious problem. More than one million Mingrelians live in Georgia. The Georgian Church is involved in television broadcasting as well. The Mingrelian/Laz language is under a threat emanating from Georgia,” Bekaroglu said.

Temel, too, highlights the role of the Georgian Church in assimilation. “The prevailing policy is the Tbilisi Orthodox Church’s policy of denial of Mingrelian identity, language and culture. The church is repressing the Mingrelians, using the card of religious belonging,” he said. “The Tbilisi government closely follows the developments in Turkey and worries that the Mingrelian people would also raise cultural demands.”