Turkey’s Circassian groups have found themselves in the crosshairs of nationalist parties after complaining of assimilation. 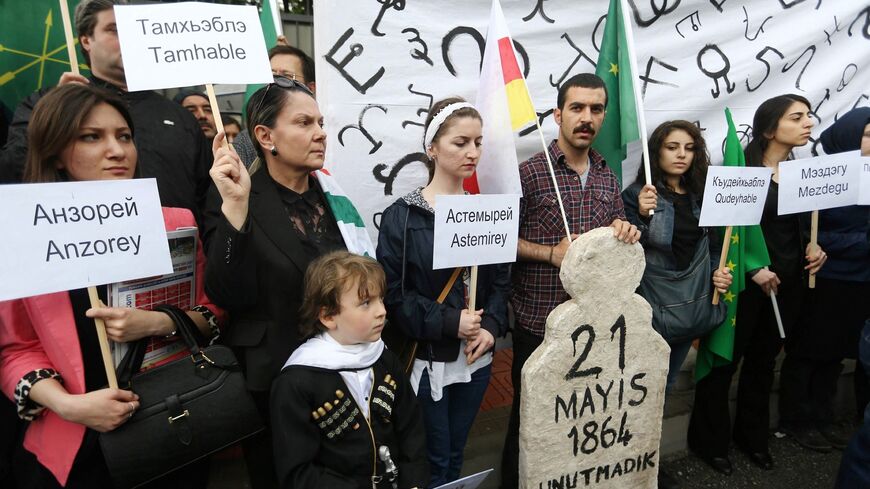 Turks of ethnic Circassian origin protest with a banner outside the Russian embassy in Ankara on May 21, 2014, on the 150th anniversary of the mass deportation and killings of ethnic Circassians by Tsarist Russia in May 1864. The north Caucasian ethnic group native to Circassia were displaced in the course of the Russian conquest of the Caucasus in the 19th century. - ADEM ALTAN/AFP via Getty Images

Turkey’s Circassian community has come under fire from nationalist quarters after complaining of assimilation against the Circassian identity.

The controversy began with a video story by German public broadcaster Deutsche Welle. In the 12-minute segment, Fahri Huvaj, a Turkish author of Circassian descent, claimed that Circassians have been a victim of assimilation in Turkey, which hosts the world’s largest Circassian population. Huvaj said that only a fifth of Circassians in Turkey could speak their mother tongue and that Circassian language and culture was on the brink of extinction in Anatolia.

Huvaj’s claims set off a frenzy in the Turkish media. Some news reports have accused Circassian groups of being “duped by foreign powers.”

The ruling Justice and Development Party (AKP) have also spoken against the video. Some other Circassian groups with close ties to the government have been encouraged to speak up against the DW’s story. The ruling party’s reaction was particularly bizarre, as it often points at the “Circassian example” to refute claims of assimilation campaigns against minorities.

“As the Circassians in Turkey, we never accept German DW television’s claims against Turkey,” the account called “Circassian Forum” wrote on Twitter.

Presidential Spokesman Ibrahim Kalin’s reaction was similar. “We will never let those who seek to ignite a fratricide and conflict in Turkey. Let our unity and solidarity be their greatest fear,” he wrote on Twitter, also citing Circassian Forum’s tweet.

A board member of the Turkey-based Caucasian Foundation claimed that the DW’s story was “a character assasination” attempt against Turkey, In an article published by Turkey’s official Anadolu News Agency, Yusuf Tuncbilek argued that the DW’s timing “was telling” and claimed that there was a political motive behind the story.

In a climate where conspiracy theories involving “foreign powers” are promoted by the government, a narrative seeking a “hidden agenda” behind DW’s story has garnered some supporters.

Yet until his alliance with nationalists in 2014, Turkey’s President Recep Tayyip Erdogan also acknowledged the assimilation Circassians had faced.

“The era of denial, rejection and assimilation has ended forever. The steps we took have ensured our siblings speak, learn and teach in their mother tongue,” Erdogan wrote in 2014 in a message marking an anniversary of the expulsion of Caucasian communities from their homeland by Russians in the 19th century.

After the AKP’s de facto alliance with nationalists, the dominant narrative in Turkey has shifted to demonizing those who criticize Turkish policies toward minority groups.

Some, meanwhile, have argued that the video was aiming to insert a wedge between Turkey’s some 4 million Circassians and the government.

“The government should be very careful,” Mehdi Nuzhet Cetinbas, a founding head of the Caucasus Association, wrote. “An olive branch to be extended to the Circassian community [by the main opposition] could tear off a significant amount of votes from the AKP," he added.

Cetinbas also conveyed his experience on assimilation “During the one-party rule [1923-1945], the elderly who could not speak Turkish were almost imprisoned in their houses. People who were speaking Circassian on streets had been arrested and fined,” Cetinbas argued. “I, as someone who was born in 1954, am the closest witness of this assimilation. I was beaten by a teacher until blood came out of my mouth and nose just because I spoke Circassian with my friend at the school yard,” he added.

“Circassians made Turkey their homeland and fulfilled all of their civic duties,” KAFFED head Umit Dincer wrote. “Yet, it is a fact that in Turkey, which hosts some 4 to 7 million Circassians today, the Circassian community has experienced assimilation,” he added. Circassians of Turkey were the most assimilated group in the Circassian diaspora, Dincer opined.

The article has further fueled the controversy. Ultra-nationalist media in Turkey accused the KAFFED of “attempting to sow a discord” in Turkey. The Federation of Circassian Associations, an umbrella organization of 13 associations, condemned the accusations, supporting Dincer.

According to Circassian intellectuals several factors have been at play in the assimilation process. First and foremost, Circassians who were expelled to the Ottoman empire in the 19th century were resettled in different parts of the empire.

Secondly, Circassians’ influential role before and during the Turkish republic's independence war came at a price. Their increasing influence fueled the fears of the founding elite, setting off a purging campaign against powerful Circassian figures including Ethem Dipsheu, an Ottoman soldier and militia leader. Dipsheu who had been awarded a medal due to his contributions to the independence war, was later accused of treason and expelled from Turkey along with many other influential Circassian figures. In addition to the expulsions, several Circassian communities were dispersed. Mass punishments led to suppression of the Circassian identity.

The “Citizen, Speak Turkish!” campaign in the 1930s effectively prevented minorities from speaking in their mother tongues in public. Circassians were even unable to hold traditional wedding celebrations. Village names were Turkified. The use of Circassian names and family names was barred, along with other minority names.

Some of these bans were abolished by the ruling AKP in 2004 during Turkey’s now-stalled European Union accession process. Turkey’s public broadcaster TRT introduced Circassian-language broadcasts one hour a week. Circassian literature and language programs were launched in two different universities, and Circassian elective courses have been introduced in middle schools.

Circassian communities in Caucasia, meanwhile, enjoy greater liberties today. In three autonomous republics within the Russian Federation — Adyghe, Kabardino-Balkarian and Karachay-Cherkessia — Circassian is a co-official language along with Russian, with television and radio channels broadcasting in Circassian.