A heated debate has erupted in the Circassian diaspora over calls to establish a Circassian battalion against Russia in Ukraine. 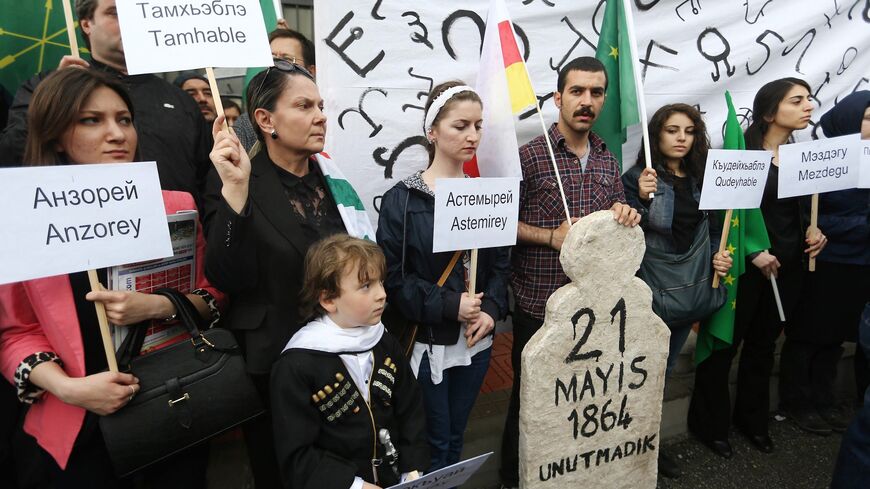 Ukrainian efforts to woo support from Russia’s ethnic peoples and stir them against Moscow have divided the sizable Circassian community in Turkey, where many see the moves as a Western-backed attempt to “open a new front” on Russia.

While the International Circassian Association, based in Russia’s mainly Muslim North Caucasian republic of Kabardino-Balkaria, has acted as a mouthpiece of the Kremlin, some Circassian exiles appear willing to support Ukraine, despite the danger.

Following its invasion by Russia, Ukraine easily secured support from pro-independence Chechens, who fought Russia in the 1990s and early 2000s. Several Chechen units have been fighting for Ukraine, including a battalion announced in May by Akhmed Zakayev, the head of a Chechen government-in-exile, while Ramzan Kadyrov, the Moscow loyalist heading the Chechen Republic, has contributed troops to back the Russian invasion.

Enlisting Circassian support, however, has proved more difficult. Russia’s Circassians are concentrated in the Adygea, Kabardino-Balkaria and Karachay-Cherkessia republics, while a much larger Circassian population lives outside Russia — the legacy of mass expulsions of Circassians from their Caucasian homeland in the 19th century, when they last fought the Russians.

In June, a group of Ukrainian lawmakers led by Olexiy Goncharenko formed a committee called “For a Free Caucasus” to press parliament to recognize that imperial Russia committed genocide against the Circassians during wars in the 18th and 19th centuries.

In October, the Ukrainian Parliament recognized the independence of Chechnya, while the Circassian genocide draft has yet to be taken up, apparently due to doubts over what position the Circassians will take. Goncharenko returned disappointed from an international Circassian conference in June in Istanbul, where he failed to address the gathering due to objections by some of the organizers.

Back in Istanbul on Nov. 25, Goncharenko visited the Confederation of Circassian Associations, which had supported him speaking at the conference, to touch base with the diaspora. Tweeting about his visit, he wrote, “These people want to see their homeland free from the Russian dictatorship. Circassians deserve the whole world to recognize the genocide that Russia started against them, they deserve to live on their land. The Russian Empire must be destroyed!”

In a separate Facebook post, he appealed, “Circassians, rise up and fight for your freedom. Ukraine is extending you a hand and will stand by you in this struggle.”

A few days earlier, Ibrahim Yagan, a dissident from Kabardino-Balkaria who has taken refuge in Poland, announced the formation of a “mobilization and technical support center” for a “Free Circassia” with the help of Ukraine’s military. “I’m calling on Circassians to create a Circassian Volunteers Battalion. That battalion will lay the foundations of Free Circassia’s free army in the future,” Yagan said. He offered an online application form and called also for donations.

Yagan and Zakayev were among online speakers who addressed a forum of “the occupied peoples” of the Caucasus, held in Kyiv in October.

The call for volunteers has fueled apprehension among Circassians that it could throw enthusiastic young people into peril and damage the diaspora’s ties with the homeland.

A petition circulated on social media and signed by nearly 600 people as of early December denounced “intensifying efforts by actors in the global power struggle to draw [the Circassian] people into proxy wars,” which it said were similar to “schemes scripted by the United States via Georgia in the past” and involved Ukraine and Poland today. “We have to keep away from proxy wars and their instigators. War and war rhetoric carry grave risks that might set off the process of our people’s destruction and are in no way an option,” it warned.

Some criticized the statement as legitimizing Russia’s aggression.

The Ankara-based Federation of Caucasian Associations, an umbrella for more than 50 groups, condemned both Russia’s disproportionate recruitment of soldiers from the North Caucasus and the call to volunteer against Russia. Neither regional peoples nor the diaspora have anything to gain from war, it warned.

It also criticized the International Circassian Association for whitewashing Russia’s policies and polarizing Circassians by claiming that they all stand by Russia and branding anti-war activists as traitors.

Georgia had similarly tried to play the Circassian card after its defeat against Russia in the 2008 war. Tbilisi hosted a conference on Russia’s “ongoing crimes” against North Caucasian peoples in 2010 and its parliament recognized the Circassian genocide the following year. Such moves, however, were met with little enthusiasm in the Circassian diaspora not only because it had backed Abkhazia’s secession from Georgia but also because of Tbilisi’s use of Circassian causes for its own political interests.

The Ukrainian efforts could fail to engage the Circassian diaspora for similar reasons.

Also, Russia’s brutal suppression of Chechnya’s independence quest has taught Circassians bitter lessons. The conflict has had disastrous fallout such as the birth of extremist Islamist movements targeting traditional Circassian culture, a deepening of Russian surveillance activities across the North Caucasus and the demise of civilian politics.

Thus, a strong sentiment has emerged against a conflict with Russia. Still, the enduring scars of historical enmities could drive some Circassians into a score-settling adventure against Russia.