Palestinian civil employees are worried that the new Palestinian government decision to ban holding a second job will cut their monthly income, as they can barely make ends meet in light of the harsh living conditions. 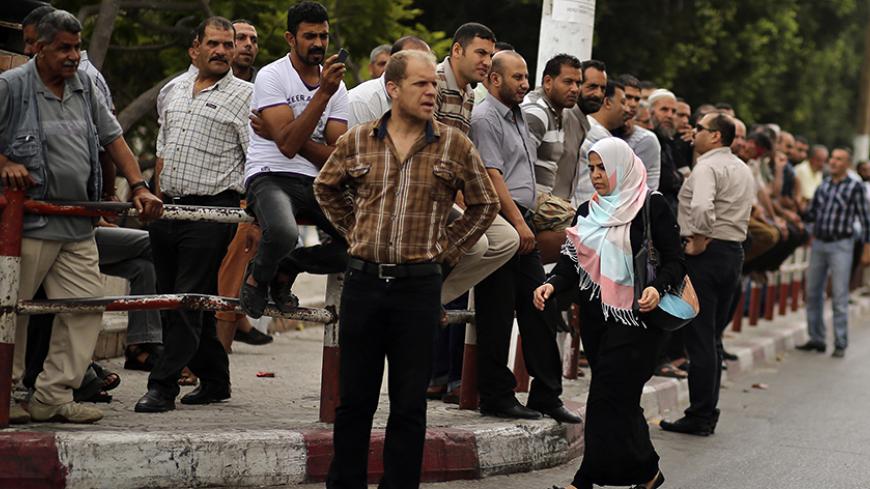 Palestinian employees paid by the Palestinian Authority wait to receive their salaries outside a closed bank after a scuffle with employees appointed by Hamas since 2007, in Gaza City, Gaza Strip, June 5, 2014. - REUTERS/Mohammed Salem

GAZA CITY, Gaza Strip — Palestinian experts discussed the government decision forbidding a second job for civil employees at a workshop organized by the Coalition for Accountability and Integrity (AMAN) on Oct. 19. They criticized the lack of a clear government policy and plan for the decision’s implementation, which would affect marginalized groups especially.

The decision did not include an increase in the salaries of public employees, who can barely make ends meet amid the rising living costs, and thus poverty levels are expected to rise further.

On Sept. 27, the Palestinian consensus government issued a decision to forbid civil and military employees to hold two jobs starting in 2017, to fight corruption and curb unemployment.

Palestinian Bar Association Secretary Rubhi Qatamesh criticized the decision and told Al-Monitor, “The decision should have been based on a sane economic equation that entails increasing the salaries to be in line with the consumption rates so that everyone can conform to the law.”

Qatamesh said that the second paragraph of Article 67 of the Civil Service Law No. 4 of 1998 states that a public employee has the right to work outside official working hours. Article 85 of the same law details the terms and conditions of the jobs that an employee can perform outside official working hours, provided it does not conflict with the main job and its requirements. He noted that the current decision forbids employees to take on any job outside the framework of public work.

He said, “The law was never implemented, and 90% of public employees have other jobs because the salary in public service is not enough to satisfy their needs.”

Qatamesh added that the new government decision should apply to everyone without exception. He expressed his doubts that public employees would abide by the decision and would evade it and take on another job. He also said that unemployment can be solved through social and economic development projects.

Buthaynah Salem, the head of the legal department at the Ramallah Ministry of Labor, said that the ministry does not know the circumstances that led to issuing the decision. She told Al-Monitor that the decision took away the ministers’ right to grant exceptional permission for their employees to take on another job, by completely banning employees to have two jobs.

Salem said that the decision also annulled the executive provisions stipulated in Article 85 of the Civil Service Law, saying that it is more important to monitor previous laws because the Civil Service Law guaranteed an employee the right to work two jobs only within strict frameworks and in specific cases. However, Salem did not deny the Ministry of Labor’s support for the decision that would curb unemployment in some sectors, and she said that its effects will only be tangible in the long run.

Yasser Khayat, a technician at the Ministry of Health in Ramallah, told Al-Monitor, “I had been working as a driving instructor outside my work hours for years, in compliance with the Civil Service Law — which allows public employees to have another job on the side after obtaining permission from the relevant authorities. But under the consensus government, the minister of health refused to grant me permission [to continue my work as a driving instructor], as he considered this an interference in matters falling within the scope of the employer's direct discretionary power.”

Khayat said that the Ministry of Transportation has been refusing to grant him permission to resume work as a driving instructor for three years without the permission of the Ministry of Health. He said that he had to work without the approval at his own peril, and he expressed his anger at the government’s decision to ban additional employment completely.

He wondered how he could continue to support his family of six without working extra hours.

An inspector with the Ministry of Health, who is married to two women and has three children, told Al-Monitor on condition of anonymity that the decision is harmful given the current circumstances. He said that public salary payments are interrupted and could be completely cut any minute. Besides, he argued, prices are soaring and the ministry is imposing salary cuts on civil servants. As a result, financial hardship is taking its toll on employees' living conditions.

He added that he started public work in 2000, but he only took on a second job four years ago without official permission. He justified his action by saying that his salary is not sufficient, and that he would continue to work illegally even if the new law is implemented in early 2017.

A teacher at a public school in Jenin who supports a family of six, including a child who needs medical treatment that costs $150 each month, said that he has been working as a cleaner at a wedding hall in Jenin for three years. He makes roughly $750 as a teacher and earns $13 per day to clean the hall; the bank loan for his house is $345 each month.

Majdi Abu Zeid, CEO of AMAN, told Al-Monitor, “The decision is part of the government’s attempts to reform public jobs and rationalize expenditure, especially under the prevailing austerity phase due to decreasing foreign grants.”

Abu Zeid said that AMAN recommended in its report about rationalization and austerity in public spending to fix the situation of employees who still hold a private job in addition to their public employment.

He noted that the decision in its current form presents several legal problems: the government did not mention how it would be implemented, the working groups it would include (in terms of job position and salary) and the nature of the second job. Is it limited to associations or does it involve freelance jobs, too? He added that the decision needs to be imposed on all groups in society, especially since some civil servants hold two positions in public institutions: Some employees work full-time at a ministry and part-time at a university, for instance.