Why the March of Hope inspired few Israeli politicians

Many Israeli politicians chose to ignore the March of Hope for fear of being branded "leftist," although participants spanned the spectrum. 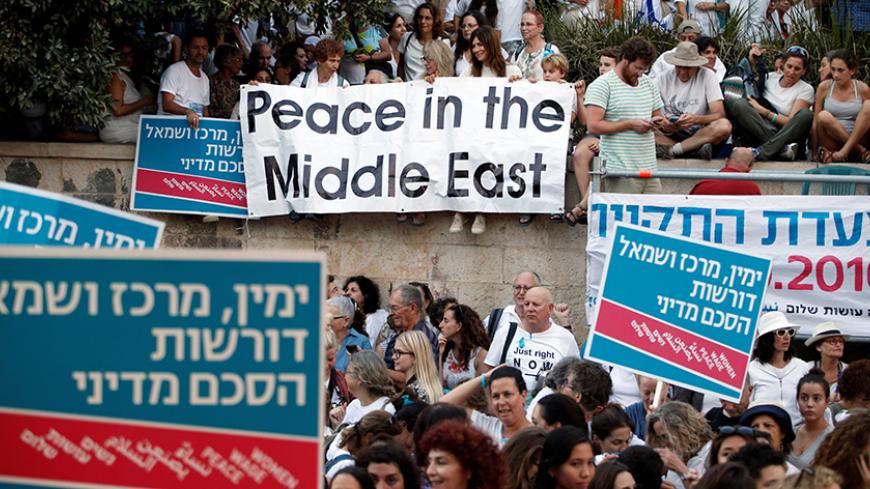 The biggest peace event of the past few years in Israel received a lukewarm reception from the media and evasive responses from the country’s ministers and most of the Knesset members invited to participate. Organized by Women Wage Peace, the March of Peace left Rosh HaNikra, on the border with Lebanon, on Oct. 4, and ended about two weeks later, on Oct. 19, with a rally outside the prime minister’s residence on Balfour Street in Jerusalem. At that final event, thousands of Israeli and Palestinian women, all dressed in white, demanded a diplomatic agreement to end the Israeli-Palestinian conflict.

They marched the length of Israel in 15 days, pausing to hold a series of events intended to send the message that peace is not the exclusive purview of the left and that there is a partner on the other side. The women represented the Israeli left, center and right as well as Palestinians. Some were religious, and others were secular. They had been preparing for this event for the past two years, since the founding of their movement right after Operation Protective Edge.

Despite the intensity of the experience for the women who participated, most Israelis, even those who support a diplomatic agreement, chose to remain at home. It is doubtful that they even heard about the march in the first place.

The two major factors that should have drawn public interest remained indifferent, to put it mildly, leaving some of the women participating with bad tastes in their mouths. The first was the media, which offered very limited coverage of the march and the inspirational events that accompanied it. The organizers were initially excited that thousands of Palestinian women had joined them to deliver their message and that Nobel Peace Prize laureate Leymah Gboyee of Liberia came to offer her support. In the end, however, they were disappointed when they realized how hard it would be for them to break through the established media’s firewall. Even on social media, most of the people who followed the event were from the peace camp or were people who tend to focus on relations with Palestinians on a day-to-day basis.

For some reason, the Israeli public still tends to identify the Israeli media with the left, but the media failed to provide support for this initiative. In contrast, when the Four Mothers movement was founded in 1997 to convince the government to withdraw from Lebanon, the media provided it the impetus that resulted in a snowball effect that ultimately swayed decision-makers. Three years later, Prime Minister Ehud Barak ordered Israel Defense Forces (IDF) troops back to Israel. Having achieved its objective, the movement disbanded.

Another reason the Four Mothers' message was effective was because their movement was created right after the helicopter disaster on Feb. 4, 1997, in which 73 IDF soldiers were killed on their way to active duty in Lebanon. The futility and steep cost of Israel’s presence in Lebanon, with no end in sight, suddenly got the public's attention. In contrast, after the second intifada and Barak’s announcement after the Camp David summit in 2000 that “there is no partner for peace” on the Palestinian side, peace became an unpopular brand, with its value continually decreasing. Even if most polls show that most Israelis want to reach a diplomatic agreement, the belief that such an agreement is feasible has been worn away over the years, so that they no longer believe it is possible — at least at present.

The second factor was the political class. As Israelis have grown more distant and alienated from peace, politicians have distanced themselves from it too, including those who should be leading the charge. Since Prime Minister Benjamin Netanyahu returned to power in 2009, Israelis have become far more skeptical about the possibility of reaching an agreement. Messages conveyed by his successive right-wing governments have rebranded “peace” as an offensive concept, identified with a naive and dangerous left.

After suffering blow after blow in the last few elections, the left preferred to stay at home, wallowing in depression instead of taking a stand. The result is that politicians like Yair Lapid of Yesh Atid, who regard themselves as potential candidates for prime minister, do everything they can to distance themselves from anything that could tie them to the left. They act as if the left is radioactive.

Most of the seats that polls predict Lapid could win — more than 20, according to several polls in recent months — are from constituencies that want to see an agreement with the Palestinians and peace. Nevertheless, the Yesh Atid chairman prefers to distance himself from such issues as a potential diplomatic agreement with the Palestinians or a possible partitioning of land. He would rather focus on statements condemning the BDS movement and anti-Israel boycott.

That is why it is not at all surprising that Lapid politely declined the organizer’s offer to take part in the March of Hope and that he was not the only politician from the center-left bloc to do so. Former Labor Party leader Shelly Yachimovich also declined. Among the few who attended were current Labor Party leader Isaac Herzog, Meretz leader Zehava Gal-On and Joint List leader Ayman Odeh. Invitations were also sent to every government minister, but not one considered lending their support or attending. For one thing, they are part of a right-wing government that does not have a diplomatic arrangement on its agenda. At the same time, participating in the march would constitute an enormous political risk. Being branded a leftist, especially for politicians from the center and the right, comes with a steep electoral cost.

Efforts were made to ensure that participants were not identified with the left. One of the speakers at the demonstration outside the prime minister’s residence was Naama Froman, a religious woman from the Gush Etzion settlement on the West Bank who was stabbed by a Palestinian. Nevertheless, the media still covered the March of Hope as an event held by women on the left.

The movement’s steering coordinator, Tammy Yakira, told Al-Monitor, “We are aware of the difficulty in recruiting politicians to the cause and of how difficult it is to market peace as a brand.” Yakira, the mother of two small children, is a Tel Aviv attorney who specializes in human rights. She joined the movement about a year ago and quickly became one of its more active members.

Yakira asserted, “Even if it doesn’t look that way from the outside, we can see and feel that we have managed to break through various circles, from the frustrated and depressed left — which sequesters itself at home because ‘there is no chance’ — to women from the periphery and Samaria, from the right, settlers and Palestinians. We are a grassroots organization, active throughout the country on a day-to-day basis. We have succeeded in convincing people that we are not a political organization and that we do not accept the notion that the left has a monopoly on peace. The right also wants a diplomatic arrangement. At the march, it was important for us to feature a poster of [the late Prime Minister Menachem] Begin and [the late Egyptian President Anwar] Sadat shaking hands in order to convey that very message. We intend to be here until a diplomatic agreement is finally reached.”