Is this man Israel's next prime minister?

Yesh Atid head Yair Lapid is building up his campaign for prime minister, stealing the center-left electorate away from the Zionist Camp party. 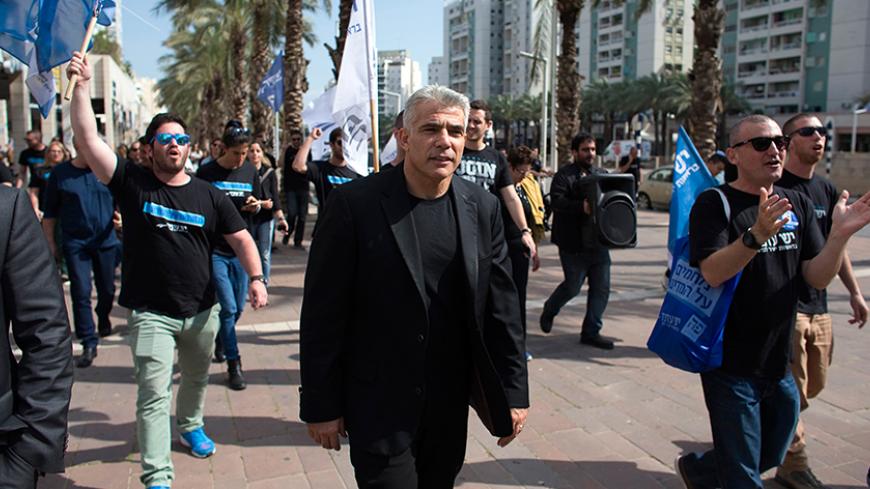 At Washington’s annual Saban Forum on Dec. 10, Yesh Atid Chairman Yair Lapid was seen keeping close to the American Jewish political strategist Mark Mellman. Actually, Mellman has been by Lapid's side ever since the 2013 elections. Lapid didn’t have to come all the way to Washington just to consult with him. The two men speak daily, even when the former finance minister is in Israel. Still, this was a great chance for the two to sharpen Lapid’s messages for the Israeli public and hone the campaign intended to lead Lapid right into the prime minister’s office. Ever since he returned to Israel, Lapid’s precise objective, as set by Mellman, can be clearly identified: He is trying to win the votes of the moderate right, or in other words, Likud supporters who opinions are more closely aligned with the political center — Israeli patriots.

Over the past few days, Lapid has managed to attack Haaretz for removing the Israeli flag when senior Palestinian official Saeb Erakat addressed a conference it hosted in New York. He has found time to unleash a resounding attack against leftist nongovernmental organization Breaking the Silence, which collects and exposes the testimonies of Israel Defense Forces combat troops who served in the Palestinian Territories, and he has cast aspersions on the far left, claiming that they have lost any sense of national pride, when confronting the current wave of Palestinian terrorism. To Lapid’s credit, he is leaving the impression that he has learned to enjoy his position in the opposition, even if he spends most of his time on public diplomacy trips overseas and on criticizing the left.

On Dec.14, the chairman of Yesh Atid launched a campaign against the boycott, divestment and sanctions movement. The campaign had already been brewing for a long time. Always a well-disciplined and diligent campaigner ready for a fight, Lapid showed up in Ben Gurion Airport’s departures lounge with a few dozen Yesh Atid activists to try and recruit Israelis headed for an information campaign against anti-Israel boycotts. The activists handed out pamphlets with arguments that Israeli travelers could use when discussing the issue overseas.

“We cannot abandon that front to people who hate Israel. We must defend Israel’s reputation in the world. We are being slandered, and we are being reviled. It is time for us to respond,” he reportedly explained to the press. He also used the occasion to laud a senior Likud official, Transportation Minister Yisrael Katz, for allowing him to bring a group of party activists to the airport so that they could engage in this important work, benefiting Israel’s public diplomacy campaign.

While confronting Breaking the Silence, Lapid also came out favorably in support of a Likud minister. He posted on Facebook, “I congratulate Defense Minister [Moshe] Ya’alon on his decision to ban members of that organization from participating in any activities in the IDF."

Lapid’s praise of certain Likud officials is no chance occurrence. It was intended to win over the support of the moderate right. It is a backhanded approach that makes a lot of strategic sense. It insinuates that Lapid is no less of a patriot than Ya’alon or Katz and a far cry from politicians on the left. That is why there has been no cooperation (and probably won't be in the future) between him and the leaders of the other opposition parties, namely the Zionist Camp and Meretz. Lapid is keeping a safe distance from them, as if they had a contagious disease.

The messages that Mellman is concocting for Lapid are simple, catchy and most importantly, nationalist and semi-religious. When it comes to public opinion, Mellman is an expert. His tools are polls and detailed surveys, segmented by the subtlest nuances in the respondents’ answers. He conducts in-depth studies of what motivates people. Based on his analyses, Mellman has always claimed that most Israelis identify with the political center. Lapid is, therefore, the classic candidate to represent them. He is the closest match.

Lapid is appealing to the moderate right, which tends to be more traditional. This approach is intended to transform him by election day into a legitimate, patriotic leader who can be trusted not to flinch when staring down the Arabs. The starting point of this campaign is that Lapid will succeed in becoming the leader of the strongest center-left party in the Knesset. In that case, all that would stand between him and a political turnover are a few seats from the right-wing bloc. In other words, he would like to do what Zionist Camp leaders Isaac Herzog and Tzipi Livni couldn’t in the March 17 election (by creating the Zionist Camp) when they failed to win over the moderate right, which regarded them as too far to the left and too secular.

So far, it looks like Lapid is drawing all his votes from the center and the left. He has not managed to make any headway with Likud voters. Nevertheless, recent polls show that the first stage of Mellman and Lapid’s strategy is working. Yesh Atid is getting much stronger at the expense of the Zionist Camp, which is the chief opposition party. It is actually posing a challenge to the Zionist Camp’s role as leader of the opposition bloc. That cannot be taken for granted. Yesh Atid has only 11 seats. It has no official role in the opposition, nor does it have a clear agenda. Lapid represents a diplomatic agenda that supports a two-state vision and advocates a regional solution for the Middle East, but that is not the main issue on which he is focusing his efforts. He is busy morning, noon and night transforming himself into the perfect Israeli patriot.

Lapid does have a prominent Achilles' heel: He has no real experience dealing with security matters. He has never held a senior position in any part of the security establishment, and his only role in government was that of finance minister. He was a senior member of the Diplomatic-Security Cabinet and gained real experience during Operation Protective Edge in July-August 2014, but that was hardly enough to make him an authority on security matters, especially in the eyes of the Israeli public. Lapid believes that when the time comes, he can bolster his status by surrounding himself with senior defense officials with right-wing leanings. Meanwhile, he is building himself up as a leader with significant diplomatic standing in the international arena. He meets frequently with heads of state and foreign ministers and maintains close relationships with foreign representatives in Israel.

While Herzog is still struggling to take off, both within his party and among the Israeli public, Lapid’s position in the opposition is much cushier. Herzog has a party to run. The Labor Party has democratic institutions of its own, and he must block internal assaults against him from within the party while preparing for a possible primary campaign. In contrast, Lapid is the sole authority in a party that succumbs to his will without engaging in internal elections. The Yesh Atid platform was designed to serve him.

True, the Zionist Camp is not sitting idle on the opposition benches. Its Knesset members figure prominently in the fight over the natural gas outline, the budget and diplomatic issues. On the other hand, the party sends out scattered messages without coordinating them first. It has many people fighting to take credit for its achievements and eventually, to take over as leader. Yet, regardless of how important it is, the struggle over the gas deal has not become a major issue for the Israeli public. The fact that the Zionist Camp is so focused on it actually damages its credibility as a potential ruling party. Israelis are much more worried about security issues and incessant Palestinian terrorism. If Herzog really wants to maintain his position as head of the center-left bloc and preserve his party’s standing, he must start treating Lapid as a political rival now, instead of allowing him to take more votes away.