Three Likud ministers advance equal rights for the Israeli-Arab population, whereas other ministers and many Knesset members opt for a populist, discriminating discourse. 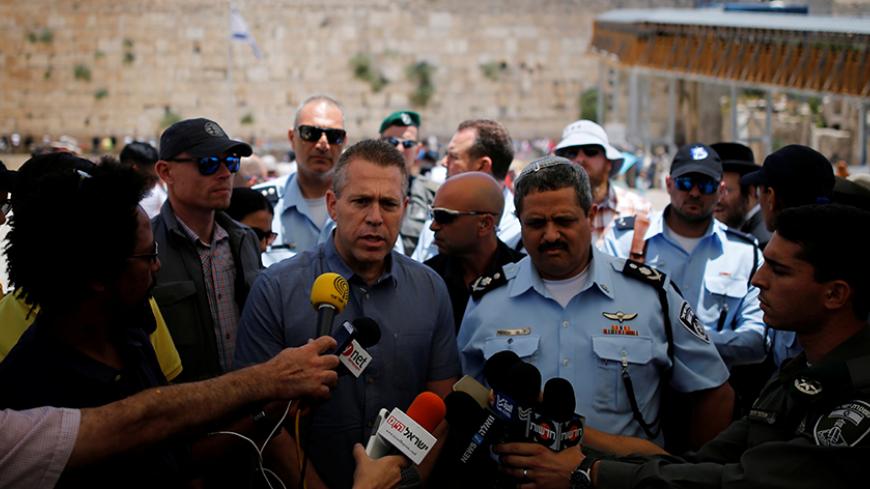 A television and social network campaign scheduled to start at the beginning of November will encourage young Israeli Arabs to join the police. Orchestrated by Minister of Internal Security Gilad Erdan, the campaign will feature promotional videos in which three prominent Arab police officers call on young people to join the organization. Considerable money and effort were invested in these clips.

It was also Erdan who promoted Arab police officer Jamal Hakrush to the rank of deputy commissioner six months ago, making him the first Muslim deputy commissioner in the Israeli police force. Hakrush was appointed to head a new division intended to improve police services in the country’s Arab localities. Erdan declared at the promotion ceremony, “This event bears genuine news, which took almost 70 years to be fulfilled. Until now, we failed to enforce the law equally within the Arab sector. If we are to be honest with ourselves, we cannot look at Arab society in Israel, with its violence and crime, and wash our hands of it as if we bear no responsibility.”

Erdan’s investment in the Arab sector will not help him politically within the Likud primaries, in which candidates for the next election list are ranked. Some will say that it will actually hurt him, given the rise of extremists within the party and the campaign that they are waging to delegitimize Israel’s Arab population, all for the sake of gaining political benefits.

Like Minister of Social Equality Gila Gamliel and Minister of Transportation Yisrael Katz, Erdan belongs to a dwindling group of Likud leaders who remain loyal to the party’s foundational values in all matters concerning equality for Israel’s Arab population. The party’s agenda has been taken over by Minister of Culture Miri Regev, who breaks new popularity records within the party every time she goes after Arab artists and lashes out at minorities. Even the chairman of the Likud himself, Prime Minister Benjamin Netanyahu, has no qualms about making racist statements about the Arab sector if these comments serve his political interests. Nor does it help one bit if he apologizes after the fact, which was the case with his comment about Arabs voting in droves last election day.

Given this atmosphere in the Likud, it should not be taken for granted that Gamliel would attack Netanyahu’s remarks that disparage Israel’s Arab citizens. One day after the Jan. 1 terrorist attack that left two people dead in a pub on Tel Aviv’s Dizengoff Street, Netanyahu arrived at the scene of the shooting and gave a speech, announcing, “We will demand loyalty to the laws of the state from everyone. No one can say, ‘I have the rights of an Israeli but not the obligations.’” His comments were interpreted as casting aspersions on the entire Arab sector’s loyalty to the state and insinuating that the sector as a whole aids terrorists. Gamliel later said, “Enough with the populism. We have to lower the volume toward Arab society.” These remarks corresponded with her struggle in the government to obtain billions of shekels in budgetary allocations to reduce the gap between the Arab sector and the rest of Israel.

The same is true of Katz. Last month, he launched a network of new public transportation lines within the Arab sector, stating, “This will expand the circle of employment for the residents of these settlements, especially women, who would not otherwise go to work because of a dearth of available transportation options.” At the same time, the Ministry of Transportation finally launched its official public transportation app, Kol-Kav, in Arabic. The app provides real time information about when buses will be arriving.

When Erdan, Gamliel and Katz begin their campaigns to win support in the Likud’s internal elections, it is quite safe to assume that these steps to improve life in the Arab sector will be of little benefit to them.

When the Knesset begins its winter session Oct. 31, the ruling party’s elected officials will be returning to the chamber with a battered image. On Oct. 25, the courts determined that Knesset member Oren Hazan (Likud) used hard drugs and ran a casino in Bulgaria, well before becoming a Knesset member. Then there is the bizarre story, first revealed by Israeli daily Yedioth Ahronoth, that Deputy Minister Yaron Mazuz chased after a Likud activist with a knife. Added to this are all the various provocative statements by Minister of Culture Miri Regev or the shift among the party’s leaders toward the extreme ideology of the settler movement. To an outsider, the Likud — once the party of the people — now looks like an arrogant faction that lost any sense of restraint. It is a party whose most senior leaders are so worried about potential political fallout among party supporters that they are afraid to condemn Hazan or Mazuz.

Unfortunately, the voices of reason within the party’s highest echelons are being drowned out. The people who set the tone in the media are the provocateurs who turned the party into an object of disgust to its sane supporters and voters, and there are quite a few of them.

An example of the Likud’s sharp turn over the past few years, but especially since the 2015 election, can be seen in its attitude toward the Arab minority and its rights, as compared to that of the party’s esteemed former leader, late Prime Minister Menachem Begin. Next week, Nov. 6, will mark the 50th anniversary of the 1966 lifting of the military government over Israel’s Arab population, imposed on that sector of the population since the founding of the state in 1948 — and which was particularly detrimental to Israeli Arabs’ freedom of movement and employment in Israel’s early years. It may be hard to believe today, but the person who led the most relentless struggle to eliminate the military rule was none other than Begin. As leader of a right-wing party based on the liberal values of Zionist Revisionist leader Ze’ev Jabotinsky, Begin believed that the military government must be lifted. He acted accordingly, even though many left-wing members of the government adopted the security establishment’s views and opposed the move.

Polls show that Begin is still the most admired leader of the Likud. Many senior members of the party, first and foremost among them Netanyahu, evoke his name frequently. They associate themselves with his legacy, even as they ignore its more liberal aspects. How sad it is, then, that in the struggle between the liberal wing of the party — which identifies with Begin — and the more populist wing, the latter seems to be in the ascendant. Considering the fact that the chairman of the coalition, David Bitan, is a leader of the populist group within the party, it is reasonable to assume that they will set the tone in the upcoming winter session.