The Likud's Gila Gamliel, once a right-wing hard-liner, has now become one of the principal defenders of the freedom of the press and broadcasting within the Netanyahu government. 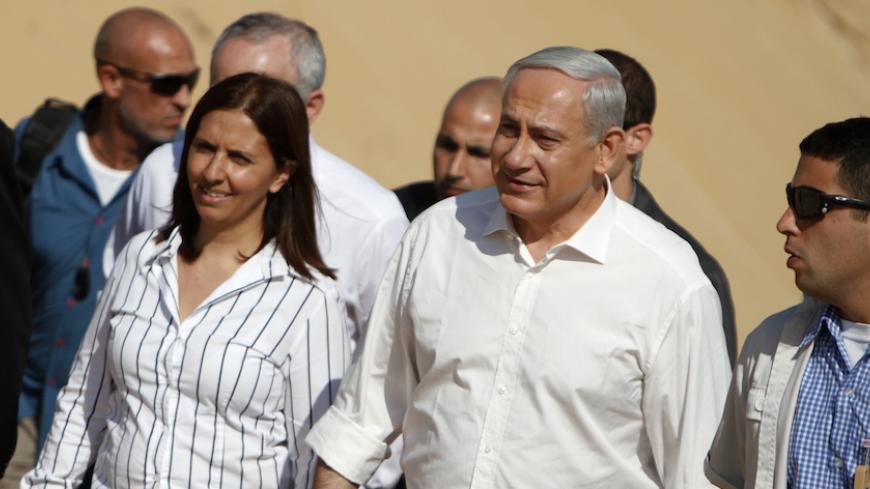 Israel's Prime Minister Benjamin Netanyahu (2nd R) and Knesset member Gila Gamliel (L) tour a planned site for the construction of a hospital during a cornerstone-laying ceremony in the port city of Ashdod, Nov. 8, 2012. - REUTERS/Amir Cohen

Minister of Social Equality Gila Gamliel is well aware of the inconsistent attitudes held by Likud Party supporters. In 2003, she joined the “Likud Rebels,” a group of Knesset members that tried to block the disengagement from the Gaza Strip. That group, which at one point numbered 14 ministers and Knesset members, made the life of Prime Minister Ariel Sharon miserable, while it won the support of Likud Party members. At the time, the rebels were popular guests on television, appearing frequently in news interviews. Gamliel was then a young Knesset member, but even at 30, she was one of the most outspoken and aggressive members of the group. She became the darling of the settler movement and other powerful right-wing groups, which promised her that she would be a member of the Knesset and minister forever.

Gamliel assumed that her career was ready to take off, and that the party’s Central Committee would place her among the top 10 Likud candidates for a Knesset seat in the next election. But like so many other members of the rebellious faction, she got drunk with power and carried away by hubris. Then Sharon split the Likud, founded Kadima and left the rebels with a shattered party on the verge of collapse. Likud members held the rebels accountable for what they thought was their party’s imminent demise.

Her punishment was quick in coming. When the Likud's Central Committee held a vote in 2006 to put together its list for the next election, almost all the rebels had been purged. The two exceptions were Moshe Kahlon and Gilad Erdan, who had insisted on maintaining the proper respect and loyalty to official institutions in their fight against Sharon.

Once she found herself out of the Knesset, Gamliel did some soul-searching. She came to the conclusion that she had been deceived by blaring headlines and the illusion of popularity among Likud supporters. In the end, she and her colleagues were blamed for the catastrophe. It took her years to rehabilitate herself and regain her position on center stage in the 2009 election. Since then, Gamliel has succeeded in establishing herself as a practical political figure, loyal to the institutions of party and state. She is someone who can withstand the temptation of getting into a populist squabble with Culture Minister Miri Regev.

Gamliel learned the hard way that the Likud is more than just the rowdy groups of voters that show up at the polls en masse on election day. They are also the tens of thousands of voters unaffiliated with any particular subgroup. Instead, they prefer the approach taken by her and Erdan.

The feuding that erupted July 31 within the Likud over the new public broadcasting corporation is further evidence of the power struggle between the liberal wing of the party and its populist wing. The former is loyal to the institutions of statehood, in keeping with the ideologies of Zionist-Revisionist leader Ze’ev Jabotinsky and the late Prime Minister Menachem Begin. The latter tramples on such liberal values as the rule of law and a free media.

Statements made at the July 31 Cabinet meeting, particularly by Regev (“It’s inconceivable that we’ll establish a corporation that we won’t control. What’s the point?”), followed later by remarks from the coalition chairman, Knesset member David Bitan (“The media is too free”), have nothing in common with the values and spirit of the old Likud. Further evidence can be found in an interview that former Labor Knesset member Daniel Ben Simon gave to Haaretz on July 21. He claimed that Regev tried to assure herself a slot on the Labor list before joining the Likud. Bitan, for his part, rose up from the local branches of the Likud. But as a new Knesset member, he is going through the same growing pains that the old rebels experienced, thinking that his remarks will ensure him a seat in the next Knesset.

By leading the fight against the Public Broadcasting Corporation, Regev and Bitan manned the barricades for the prime minister. There can be no doubt that Regev was praised for this in WhatsApp groups aligned with the Likud, from which she draws her strength and her bold attitude.

Unlike her, Erdan has been a member of the Likud for as long as he can remember. He was involved as a teenager and later as a college student. After veteran Likud ministers Dan Meridor, Gideon Saar and Limor Livnat quit politics and minister Moshe Kahlon left the Likud, Erdan was among the few young people in the party’s leadership that still gave voice to Jabotinsky’s principles and stately approach in all matters pertaining to a free media, minority rights and an independent judiciary. In his recent attacks on Regev, he accused her of demagoguery.

Just one day after the contentious Cabinet meeting, Gamliel gave an interview to Army Radio (the very radio station that Regev has been waging a bitter campaign against since her appointment). In an aggressive and combative interview, Gamliel leveled the accusation that the way Regev and others like her are acting borders on fascism: “Anyone who tries to interfere with the establishment of a public corporation has no idea what democracy is. These statements opposing the public broadcasting corporation and voicing a need to control it border on fascism and dictatorship. They are reminiscent of numerous infamous regimes. I’ve been in the Likud for years, but never in my life have we stooped to these levels of discourse. We must denounce it. Only the darkest regimes make statements like that.”

Gamliel’s attack immediately led to speculation about the minister’s future. Was her public assault on the popular Regev an act of political suicide within the Likud?

It is no coincidence that many former Likud “princes” rose to Gamliel’s defense, including Meridor, Livnat and Moshe Ya’alon. Livnat tweeted, “There are fewer and fewer ministers who believe in the state as envisioned by Jabotinsky and Begin in my own movement, the Likud. Mine?”

As it turned out, Gamliel received countless text messages in support of what she did. She was even praised for it on the Likud’s WhatsApp groups. Local party leaders and mayors may appreciate Regev’s folksy approach, but even they feel that this time she crossed a line. The members of the “New Likud” group, which aims to reshape the party from within, even posted a statement in support of Erdan and Gamliel on their Facebook page.

One senior Likud member told Al-Monitor on condition of anonymity, “Miri Regev is confused. She thinks the Likud is a bunch of baboons, all about cheering and cursing out the left, the Ashkenazis and the media. That is exactly how she perceives the Likud, because she did not grow up in it. Among the 30 seats we won, there are plenty of people who are revolted by what she says and does. She doesn’t understand the Likud’s DNA. She doesn’t even recognize it. One day she’ll understand.”