Justice Minister Ayelet Shaked's claim that the more Jewish Israel becomes, the more democratic it will be, actually challenges the Zionist idea of Israel as a Jewish and democratic state. 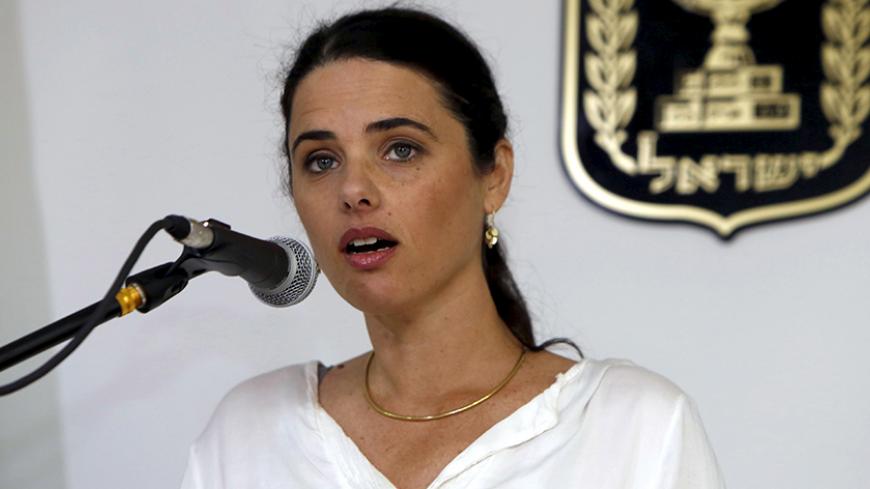 Ayelet Shaked, Israel's justice minister, speaks during a ceremony at the Justice Ministry in Jerusalem, May 17, 2015. - REUTERS/Gali Tibbon/Pool

“Pathways to Governability” is the title of an article by Justice Minister Ayelet Shaked in the new journal HaShiloah. It is an important, comprehensive 19-page piece in which the minister from HaBayit HaYehudi lays out her personal creed — a coherent and carefully thought-out conservative worldview that includes a vision of how to strengthen the Jewish component of Israel’s character. As would be expected, Shaked’s document — which she describes as a “Thatcherite manifesto” — has evoked considerable interest. It has also set off a political firestorm.

Leading the forces warning against “Shaked’s vision” is Zionist Camp Knesset member Tzipi Livni, herself a former justice minister. She used an interview with Army Radio on Oct. 2 to present counter-arguments and express her own coherent worldview, which attempts to defend the balance between the Jewish and democratic components of the State of Israel.

The argument between the current justice minister — the strongest woman not only in the religious, right-wing HaBayit HaYehudi, but on the right as a whole — and her predecessor — one of the most prominent leaders of the political center-left — is one of the most important in the past few years. This is not only because it sets one of the core issues about the character of Israel at its center, but also because both sides present in-depth arguments in such meticulous detail. In an age when statements by Israeli politicians are judged by their ability to rouse vociferous discourse on social networks by taking their positions to extremes and by attacking their opponents, as Culture Minister Miri Regev is so prone to do, the Israeli public finally has a chance to enjoy a serious debate on two conflicting worldviews.

Shaked deserves considerable credit for her thoughtful article. Although the mainstream press may have given it such diminishing titles as “Shaked’s Jewish Vision,” the piece actually covers many other key civil, judicial and political issues. Shaked proves that although she was raised in the new politics, which draws its strength from social networks, she nonetheless has the capacity to present a complex worldview. It is not by happenstance that so few politicians were ready to pounce on her manifesto. They realized that this time, the message is more complicated than usual. Very few of them would delve into such a long article, especially one academic in nature and that cannot be summarized in a single headline.

Shaked has no qualms about setting herself against the oracle of legal activism, former Supreme Court Justice Aharon Barak. She is not afraid to argue with him. While her article covers many different issues, it is only natural that the tension between a Jewish state and a democratic state caught people’s attention. This is because it touches on the way that Israel has defined itself from the moment it was founded in its Declaration of Independence (1948). In the absence of a formal constitution, this document serves as the country’s moral, ethical and civil compass. It presents the “Jewish state” and the “democratic state” as being equals in the country’s hierarchy of values.

Shaked is attempting to shift priorities. According to her, Israel will be a more democratic state the more it is a Jewish state. She does not submit to judicial liberalism, choosing instead to counter it with a conservative legal approach that sanctifies the complete separation of authorities. For the most part, she is actually trying to prevent the Supreme Court from interfering in legislation, but she is also trying to reduce private legislation and increase the Knesset’s oversight over the government.

“Precisely as we want Israel to undergo processes of advanced democratization, it is our obligation to deepen its Jewish identity in turn,’’ Shaked argues. “These identities certainly do not conflict. On the contrary: I believe they strengthen one another. I believe we will be a more democratic state the more we are a Jewish state, and we will be a more Jewish state the more democratic we become.’’

Shaked also rejects the argument that there must be a constant struggle between Israel’s Jewish and democratic components. She calls for legislation to strengthen the country’s Jewish character, asserting, “The tracks along which Israel’s legislative train runs must take the Jewish nature of the state into account. We must do so in the most genuine way possible, not just symbolically, but as an issue with tangible significance.” With this, Shaked positions herself as the trailblazer for a new right-wing vision and path, which challenges Israeli democracy in a very disturbing way.

Livni is alarmed and rightfully so. She identifies the real danger as coming from an activist justice minister with such a fully formulated worldview. According to Livni, Shaked’s assertion that “we will be a more democratic state the more we are a Jewish state” is a resounding reminder of the truly dangerous process that has been underway in Israel in recent years. The concept of Israel as being both a Jewish and democratic state is being shattered.

What Livni seeks to do is defend the approach that argues that one component does not have priority over the other. Both are important. That is the Zionist vision. Livni laid out her position in her radio interview: “A Jewish (state) of hatred, of seating women in the back, of cries of ‘Death to the Arabs!’ No! A Jewish (state) in which the Law of Return is the first article of the constitution. Yes. A Jewish (state) in which new immigrants cannot marry here. No!” In Livni’s worldview, equality and egalitarianism are both democratic and Jewish values.

Also in Livni’s world, the real argument cannot take place without talking about the elephant in the room — the Palestinian-Israeli conflict. For years, she has said that it is impossible to preserve both the Jewish and the democratic nature of Israel without first achieving a diplomatic solution to the conflict. “That is why we must give up some of the land and part ways with the Palestinians. If we don’t, they will vote in elections to the Knesset and become a majority,” she wrote on her Facebook page.

Zionist Camp Knesset member Shelly Yachimovich presented another carefully reasoned response to Shaked’s manifesto, calling the article “an important, stark, discernible and transparent ideological text. It is the absolute and acute opposite of my own worldview.” In a lengthy Facebook post, Yachimovich argues that Shaked disparages the state and denigrates and distorts the Zionist vision to make Israel more religious.

Yachimovich is right in asserting, “There is a harsh and bitter ideological rivalry between us.” That is why this argument is one of the most important to take place here in Israel over the past few years.