Meet the woman who could lead Israel’s right-wing camp

Justice Minister Ayelet Shaked, seen as the person who would replace Prime Minister Benjamin Netanyahu as the leader of Israel's right wing, comes under major fire from the center-left. 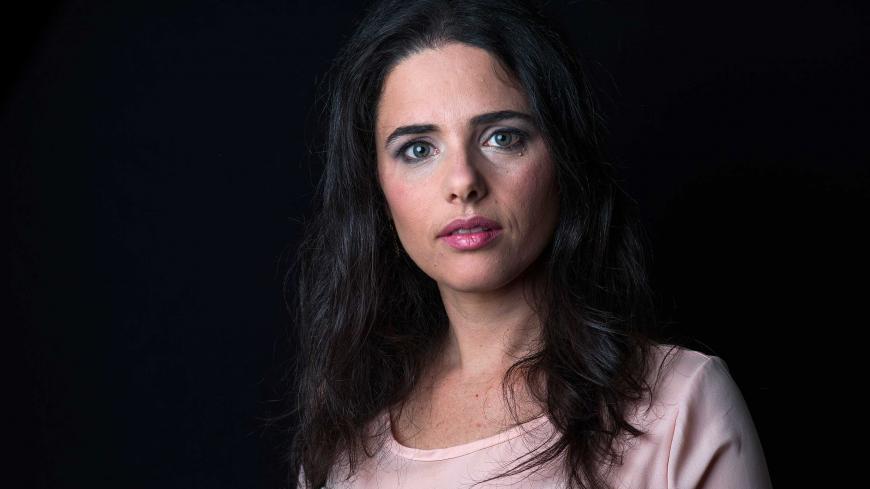 “You will destroy democracy,” Knesset member Shelly Yachimovich of the Zionist Camp shouted at Justice Minister Ayelet Shaked of HaBayit HaYehudi on Sept. 17 during a special recess debate called by the opposition. The title the opposition chose for the debate was “The justice minister’s attack on the High Court and the danger to democracy,” but it soon became clear that much more was involved than an assault on the High Court.

Standing behind the podium at the plenum, with shouts and interjections from center-left Knesset members in the background, Shaked again and again tried to deliver the message that all her work is practical, respectful and never personal — in contrast with her critics on the left.

Yachimovich’s statement crystallized the cold and considered conduct of the justice minister, who is systematically, quite fundamentally and resolutely succeeding in changing the face of the judicial system in Israel. Shaked is not tempestuous like Minister of Culture Miri Regev, most of whose declarations are empty. Shaked comes to work with an organized list of tasks, and the results speak for themselves.

That the opposition tried to place the 42-year-old minister on the stake, rather than the prime minister as usually occurs at such forums, attests to how central Shaked has become in the political system.

Shaked is undoubtedly the woman of the year in politics. She’s the “new Netanyahu,” the heir of the prime minister as the leader of the right, according to all public opinion polls. In fact, she is far more popular than any minister in the Likud and more popular than the chairman of her own party, Education Minister Naftali Bennett. This is a remarkable achievement, especially since she’s a relatively young woman in her first term as a minister and since she serves in the No. 2 spot in a religious, right-wing, medium-sized political party.

On Sept. 17, center-left Knesset members came up to the podium one by one and warned of Shaked’s big and dangerous plan. “In one thing the justice minister is right, it’s either us or them. … It’s either a messianic, nationalist, religious and occupying Israel or an open liberal democracy that extends a hand to peace and grants equality to all its citizens,” Meretz party leader Tamar Zandberg said.

As Shaked sat relaxed, whispering with governing coalition whip David Amsalem, Yachimovich sarcastically asked the justice minister, “Have you heard of separation of powers? Have you heard of judicial independence? Have you heard that democracy is not only the rule of the majority but also preserves the rights of the minority?”

In a TV interview Sept. 6, former Prime Minister Ehud Barak said, “It cannot be that a justice minister who has done nothing in her life threatens the High Court.” That a senior figure such as Barak discusses Shaked attests to her great power and her potential for advancement. She, like Netanyahu, her first teacher in politics (she served as his chief of staff when Netanyahu headed the opposition), has successfully leveraged the attack against her and turned it into a battle of left versus right, thus winning more sympathy.

During the debate in the plenum, Shaked told Knesset members from the left who had assailed her, “Your crass statements turn this discussion into a farce. … As long as it [the court] is aligned with your [opinions] it is the source of justice; the second it proposes an approach that is slightly different you are ready to burn down the clubhouse, nothing less.” Armed with recent examples, she spoke of how left-wing figures, including Knesset members, excoriated the High Court when it authorized the demolition of the Bedouin village of Umm al-Hiran.

In this way Shaked has succeeded in turning the debate on the character of the judicial system in Israel into the main ideological argument between left and right. The diplomatic stagnation of recent years between Israel and the Palestinians has very much diminished the centrality of the debate between the Israeli political camps regarding the two-state vision. In this respect Shaked not only has talent, but also luck, since she entered the vacuum left by the diplomatic desert.

Shaked received the Justice Ministry in spring 2015. From that moment, mostly under the radar, she started an in-depth action to change the face of the judicial system. Reducing the power of the High Court was in her sights, as well as changing the ranks of judges, including in lower courts, with the goal of turning the courts conservative and less interventionist in Knesset legislation.

Even before her appointment as justice minister, Shaked, when she was a new member of the Knesset, was a partner to legislative initiatives in this spirit. She did this along with Tourism Minister Yariv Levin, who was one of the first to raise the flag of the battle against the High Court. This all happened nearly a decade ago. Levin then argued that the court leaned left and was therefore dangerous. The battle Levin started in 2009, along with Knesset members from the extreme right in the Likud, was then considered esoteric and slightly crazy. There were then ministers in the Likud, including Benny Begin, Dan Meridor and Miki Eitan, who steadfastly fought this group. Even Netanyahu would defend the High Court. Begin is the only one left as an active Likud Knesset member from these figures opposing his own camp's attack on the judicial system.

It soon became clear that Shaked would be the perfect executor of this agenda. She brought charisma and a practical style, and has proven unyielding in her wrangling with the former president of the High Court, Justice Miriam Naor. Shaked succeeded in overpowering Naor in the appointment of new judges, and during Naor’s term six new judges were appointed to the 15-member High Court with Shaked’s support.

A year and a half after her appointment Shaked published a 17-page manifesto of her beliefs. The document presented a conservative Thatcherite world view, bent on empowering the Jewish elements in Israeli democracy, reducing the intervention of the High Court in legislation and introducing bills to strengthen the Jewish status of the state. In a heated and shallow political climate Shaked has managed to spark an essential debate on principles.

Being a practical person, these words have been translated into results. The controversial Nationality Law (anchoring the Jewish nature of the State of Israel) that Netanyahu advanced and she backed has ultimately made her one of the main enemies of the left, along with the prime minister.