After splitting from HaBayit HaYehudi for personal political reasons, Ministers Naftali Bennett and Ayelet Shaked are struggling to define a distinct agenda for their new political platform. 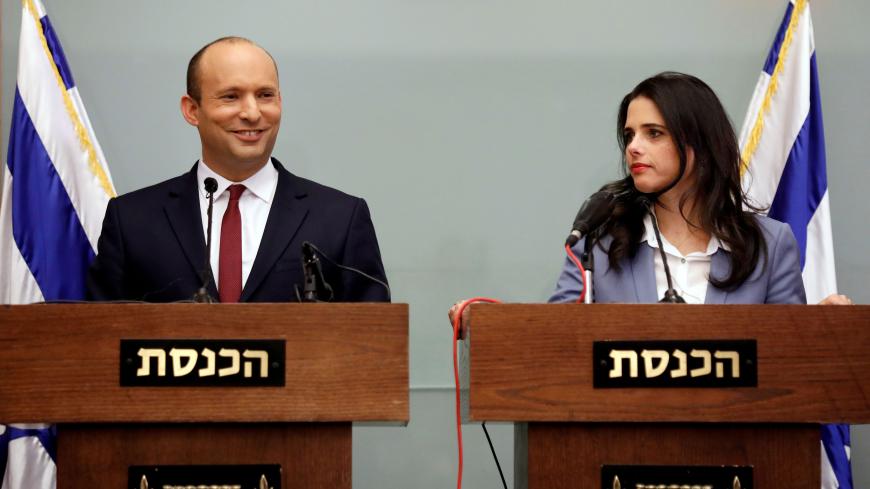 It’s been two weeks since Ministers Naftali Bennett and Ayelet Shaked dropped a political bombshell by announcing that they are leaving HaBayit HaYehudi to create the New Right party. So far, their agenda seems rather disorganized.

The vision that they laid out Dec. 29 was of a party that would appeal to both religious and secular Jews. They gave examples from their personal lives: Bennett is a religious man who is married to a secular woman. Shaked is a secular woman from Tel Aviv who became a darling of the religious Zionist movement. Their message was of one big political house where right-wing religious and secular Jews could live together in harmony because they share a set of values and a similar worldview.

But even on the evening that they announced their big vision, it was unclear what was so groundbreaking about the idea. After all, religious and secular Jews share a home in the Likud, Yesh Atid and even Labor. The idea is not new. But after splitting from HaBayit HaYehudi along with Knesset member Shuli Mualem, Bennett and Shaked needed to create a distinct identity for another right-wing party. What they chose to present — joint leadership by a religious man and a secular woman — was kind of a gimmick. Then this week, on Jan. 9, Mualem cracked the image of a party that proposes a social partnership.

At a legal conference in Jerusalem, Mualem made remarks that should have disturbed any secular person who is considering voting for the new right-wing party. Mualem, a religious woman, expressed hope that Israel would adhere more to Jewish religious law. She put it, “As people whose lives are based upon commitment to the Torah, I think that is the essence of the battle: to bring the Torah into every aspect of our lives. And the entire State of Israel, God willing, will go more and more toward that place of commitment to Torah and halacha [Jewish law].” Mualem’s remarks were recorded and played on Army Radio the next day. As expected, they were a source of considerable embarrassment to the New Right.

In an effort to control the damage, Bennett tweeted, “For anyone who doesn’t understand, the New Right is a right-wing party made up of secular and religious Jews with diverse opinions. That is the beauty of the party and what makes it unique. We are proud to have different opinions, just like in any family, but the only thing everyone will be expected to adhere to is the party platform. That platform will state that we support Jewish roots and tradition, but oppose religious coercion and will continue to work to unite the nation.”

It is safe to assume that from now until the election, the New Right will practice campaign discipline to avoid any more embarrassments. On the other hand, it is also safe to assume that Mualem’s remarks will be played repeatedly by the new party’s political rivals. Mualem revealed a well-formulated worldview and even if, as Bennett said, it is a part of the broad spectrum of opinions that make up the New Right, it is still very problematic. And it goes without saying that it contradicts the new party’s vision.

The New Right’s eclectic agenda will also be expressed in the people it chooses for its Knesset list. Since the party has no democratic mechanism for choosing its candidates, the task will be left to Bennett and Shaked. This week, the party named its first two candidates: right-wing journalist Caroline Glick and Shirly Pinto, a woman who was born deaf and has been active in promoting the rights of Israel’s deaf community. To the New Right’s credit, it is worth noting that as of now, the New Right has a majority of women candidates.

Glick represents the party’s far-right agenda. The choice of Pinto, on the other hand, feels manipulative. She would be the first deaf person to serve in the Knesset, but it is not at all clear how she fits in with Bennett and Shaked’s right-wing perspective or Mualem’s religious worldview. After all, based on their own statements, Bennett and Shaked want to present an alternative to the national leadership by claiming that the New Right is the real right.

If this is really their purpose, it is not at all clear why they are now looking for a Mizrahi social activist to adorn their list. Just like their decision to add Pinto, it makes the project feel more like a reality show than a party with a well-organized agenda. Furthermore, the party already has two Mizrahi women in Mualem and Pinto, and if the definition is expanded even slightly, Shaked herself is half-Mizrahi, since her father is of Iraqi origin. Identity and ethnic politics can influence elections, but only when the connections are genuine. The addition of another Mizrahi candidate will likely be seen by voters as strained and inauthentic.

On Friday morning, Bennett took to the social networks to announce a new recruit. Bennett’s old friend from the time they served together at the army's elite Matkal unit, Matan Kahana, was joining the party. Kahana also served as a combat pilot and is part of the religious Zionism stream. “These are exactly the kind of people we need in the Israeli public sphere for Israel to win again,’’ said Bennett. Kahana is obviously a worthy person, yet his impressive military service does not predict a successful political career. Politics is a profession. Few “parachuted stars’’ dropped into politics end up making it on the long run.

The New Right is part of a larger phenomenon that has been gaining momentum over the past few years. New parties are being formed all the time on the basis of some public sentiment or other. However, they are designed mainly to give power to the person leading the party and serve their personal needs. That was what happened with former Likud senior Moshe Kahlon, who founded Kulanu because he didn’t want to be politically dependent on Prime Minister Benjamin Netanyahu and the Likud. The same thing is happening with Bennett and Shaked as well as with the new Shield of Israel party founded by retired Brig. Gen. Gal Hirsch. Similarly, in the rival camp, former Chief of Staff Benny Gantz recently announced the creation of the Israel Resilience Party.

One characteristic common to each of these parties is an unclear platform. Gantz is offering a hazy security agenda in an attempt to appeal to the right, and Bennett and Shaked’s party is doing the same regarding matters of religion and state. Each of these people could have easily joined an existing party that accords with their own agendas, but chose an independent path instead for entirely personal reasons.

In the case of Bennett and Shaked, it is no secret that they wanted to join the Likud at the start of their political careers but were blocked because of bitter personal quarrels with the prime minister and his wife and joined HaBayit HaYehudi instead. But now, five years later, they have reached the conclusion that the extremist ideology of some other party members prevents them from reaching a wider public. Hence their grand exit. But the New Right is just another way station for them. They are still waiting for Netanyahu to leave the Likud so that they can pursue their original plan.