As tension escalates between Iraq and Turkey regarding the battle to rid Mosul of the Islamic State, Iraqi politicians call for boycotting Turkish products. 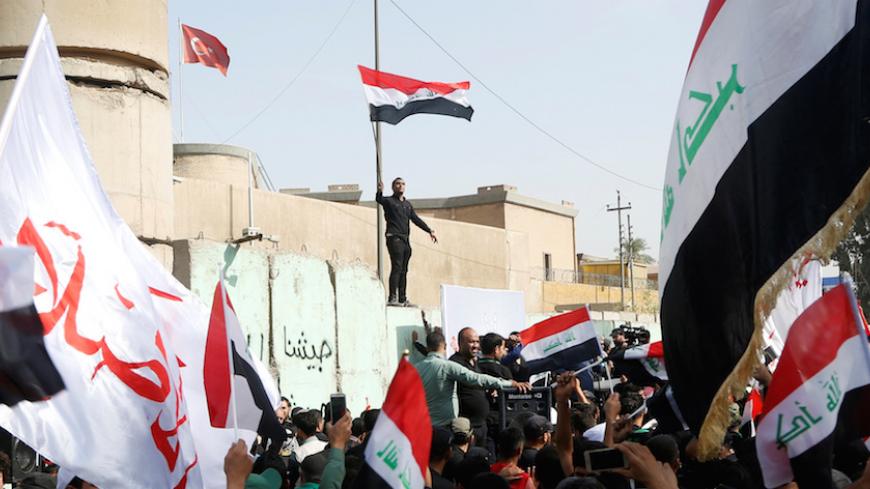 BAGHDAD — As Turkey continues to thumb its nose at Iraq, thousands of Iraqi Sadrist protesters surrounded the Turkish Embassy on Oct. 18 in Baghdad and demanded that Ankara remove its troops from the Bashiqa base near Mosul. Meanwhile, Iraq's parliament is mulling the effectiveness of a potential economic boycott against Turkey.

Parliament member Ali Abd al-Salman told the media Oct. 12 that an economic boycott is necessary "to force Turkey to withdraw its troops.”

However, things have escalated beyond mere calls for a boycott. Rahim al-Darraji, a parliament member representing Al-Mouwaten bloc, called for “burning Turkish goods in the streets."

And some Iraqis seem to be taking serious steps toward waging economic war on Turkey.

For example, the provincial council of Basra decided Oct. 16 to stop hiring Turkish companies for projects, especially in the oil business, in addition to stopping Turkish nationals from entering Basra International Airport and preventing the circulation of Turkish goods in the province.

In what seemed like a serious action rather than a simple demand, the Karbala provincial council on Oct. 15 threatened to expel Turkish companies operating in the province if Turkey insists on keeping its troops in Iraq. Resentment against Turkey is even growing on the street: On Oct. 9, Iraqi workers expelled officials from a Turkish company for taking down a Shiite religious banner.

Iraqi boycotts against Turkey are not new. The Baghdad provincial council voted in December to boycott Turkish products and prevent new deals with Turkish companies.

But Salam Zaidan, a journalist and expert in economic affairs, told Al-Monitor a boycott isn't realistic and would harm both countries. For example, Turkey could retaliate by threatening to withhold its water resources, he said. Also, “The Iraqi government will not be able to control the many outlets for imports, including the Kurdistan Regional Government, which relies almost exclusively on trade with Turkey.”

However, several studies say Turkey would lose $11 billion — the equivalent of its trade exchange with Iraq in 2015 — if Iraq were to cut economic ties. In addition, there are 1,058 Turkish companies operating in Iraq that would stand to lose business there.

Mohammed Abbas, a member of the Iraqi parliament's economics and investment committee, told the media Oct. 13 that “boycotting Turkish goods can be a pressure card in the hands of the Iraqi government.”

Economist Abdul-Hussein al-Shammari had expressed the same opinion when he told the media Oct. 6 that “Iraq’s boycott of Turkish goods will leave a significant impact on the Turkish economy.”

Hussein Thaghab, an economic expert with the pro-government newspaper al-Sabah, told Al-Monitor, “In terms of economic considerations it is possible to pressure Turkey, and this could negatively affect its economy. However, a serious call to boycott Turkish products is quite difficult in the absence of alternative local products that could cover the market’s needs. In addition, it is hard to control the products’ entry since the government is unable to control the borders."

Thaghab added, "The long-term commercial exchange system and the long-term contracts between Turkish companies and the Iraqi government, as well as the private sector, are the reasons why a boycott is impossible at this time.”

Najiba Najib, another member of the economics and investment committee, also believes a boycott would not have the desired effect.

“It is not possible for Iraq to pressure Turkey economically to force it to withdraw its troops," Najib told Al-Monitor. "Iraq is a consumer country, and blocking the borders with Turkey would result in a rise in prices in the Iraqi markets. This would further burden the citizens financially, and thus it will not force Turkey out of Iraq.”

To successfully boycott Turkey, Iraq would need to provide comparable alternative products from local and international sources, according to Ahmed Kanani, who heads the committee. “Iraq imports goods worth millions of dollars from Turkey. The Iraqi markets are filled with Turkish products, and finding new sources for imports requires time and plans,” he told Al-Monitor.

Kanani believes that, given enough time, “it would be possible to impede dealing with Turkish traders and businessmen and pressure Turkish companies in Iraq, and thus force them to [pressure] their own government to take positive political positions toward Iraq and withdraw troops from Iraqi territory.”

There is no doubt that implementing a boycott is not as easy as simply calling for one. Even if an economic boycott were feasible, it would be impossible to get parliament to approve it because so many parties have strong relations with Turkey. A lot of companies and contracts are managed by politicians and influential business people who would not be pleased with the deterioration of economic or even political ties with Turkey. Meanwhile, the Iraqi market remains overly dependent on Turkish goods that cannot be dispensed with abruptly.